Oscar Buzz – ‘Pieces of a Woman’: Vanessa Kirby is Powerful, Raw and Intimate in this Silent Portrayal of Tragedy 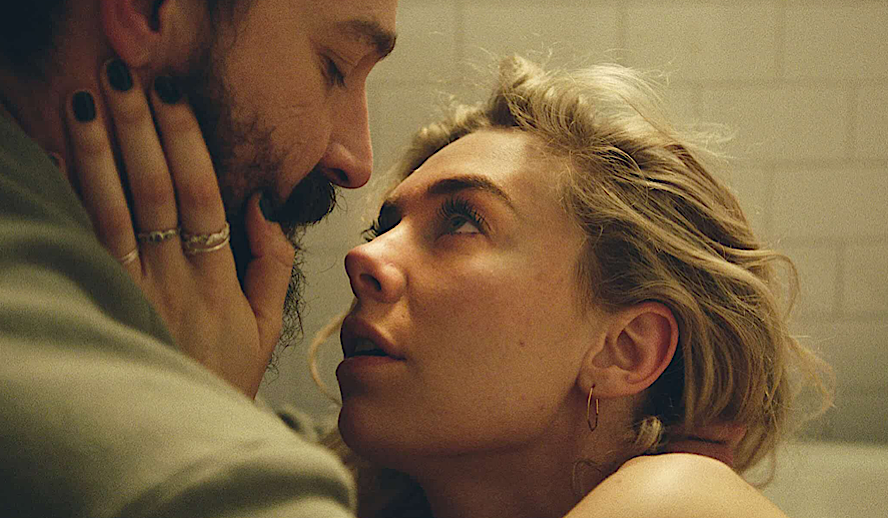 Photo: ‘Pieces of a Woman’/Netflix

Real grief is silent. It perforates through every interaction we have and every daily activity we do. To capture grief realistically on screen is something filmmakers have tried to achieve since the beginning of the medium, and ‘Pieces of a Woman’ does exactly this. The film is absolutely heartbreaking to watch because it succeeds in its goal of capturing the process of mourning after a tragedy. It follows a woman and her husband after a devastating home birth gone wrong in a way that can only be described as visceral. Shia LaBeouf and Vanessa Kirby give intensely emotional, heartfelt performances as would-be parents struggling to find meaning in the wake of their daughter’s death.

The first act of the film focuses entirely on the birth and the moments leading up to it, in the process creating one of the most intense scenes of 2020. The dialogue in the film is chaotic in nature, following a Noah Baumbach style. The events that follow the birth are sporadic and seem to be leading to nothing. They feel more like a series of vignettes strung together to create a story, which, in this case, is a good thing. We get a sense of the overarching amount of time that the characters spend grieving their loss. But, underneath all the vignettes lies the connection of grief. ‘Pieces of a Woman’ is one of the most quietly intuitive films I’ve seen all year, deeply cutting in its goal to realistically portray tragedy.

The first thing that I’d like to discuss is an absolutely phenomenal achievement in filmmaking as a visual medium: the birth scene. This takes form as a twenty-minute long take appearing about ten minutes into the film that captures the raw pain of Martha, Vanessa Kirby’s character, going into labor, giving birth, and subsequently losing her infant daughter. Anyone who has ever worked on a film before understands the precision that the camera and actors have to move with throughout the scene in a long take. Everything has to be timed perfectly in order for it to work; the camera has to be in sync with the actors, and vice versa. And that’s exactly what the filmmakers accomplished with this scene. The camera almost takes on a lifeforce of its own, moving with an effortless flow around Martha, her husband, and the midwife. We feel as if we are there with the characters, floating from the living room, to the bathroom, then, finally, to the bedroom.

The timing is perfect, with the camera building up momentum to represent the growing panic of the characters. The thing that’s the most beautiful about this long take, however, is the fast-pace of it all. By seeing the entire process of Martha giving birth without any cuts, we get a sense of just how quickly a situation can turn. It feels like one minute we are happy and excited about the miracle of new life, then the next minute we are absolutely destroyed by the unexpected death of Martha’s daughter. Film, as a visual medium, is the most visceral in that filmmakers have the ability to re-create the character’s emotions through the visuals we see on screen. The best example of this is from a scene in Andrei Tarkovsky’s ‘Stalker’, where the characters are riding on a train car for a seemingly endless amount of time before they finally reach “the Zone”, an area where they are free from the constraints of normal life.

By keeping the shot before they enter “the Zone” as long as possible, Tarkovsky creates the same sense of exhaustion in the viewer as the characters feel riding the train car. This translation of emotional exhaustion is one of the best utilization of a long take, and that’s exactly what director Kornél Mundruczó does with the first act of the film. We are visually exhausted, just like Martha is, when the baby finally arrives, only for that happiness to be shattered by an accident.

After the first heartbreaking act of the film, I was hesitant to believe that the director could maintain that same momentum for the rest of its screen time. I was pleasantly surprised to see that the intensity of the first scene was met with a slow fallout over the course of several months, once again, meeting the expectation of realism in this film. The tragedy happens so quickly, but the recovery is a long, arduous process with no definite path to success. Instead, the film focuses on the little things that symbolize grief, such as the smell of an apple or the unwanted apologies from “friends of friends”. The main thing that this film gets right, moreover that Vanessa Kirby gets right with her performance, is the lack of emotional outburst. Far too often, women are portrayed as hysterical in the face of loss.

They are constantly bursting into tears, inconsolable to the outside world. However, Kirby opts to show Martha’s grief as quiet. She doesn’t even cry until at least three-quarters into the film. Her grief instead comes through in the moments of silence and reflection. Every shot of a child in public is contrasted with a close-up of Kirby observing, contemplating what could’ve been. To me, this is a much more realistic depiction of emotions than other films because, as a woman who doesn’t cry very often, it can be extremely difficult to communicate my distress in the face of tragedy.

The lack of an expected response, tears, throws off the viewer and can make Martha seem cold at times. However, when Martha finally begins to process her sadness, she opens up to the world and allows the emotion to flow. It feels natural, not theatrical in any sense, and a realistic depiction of the quiet ways that mourning seeps into our minds to affect our daily life. Mourning can look like anything, not just emotional breakdowns featuring uncontrollable sobbing. It can be the way we withdraw from the people we love, the way we yell when provoked, or even, the way we walk around in public.

The last part of this film that really stood out to me was the dialogue. In the early 2000s, filmmakers like Greta Gerwig pioneered a new genre of film called mumblecore. It placed heavy importance on naturalistic dialogue and performances, something that I feel has a heavy influence on this film. Specifically in ‘The Meyerowitz Stories’ by Noah Baumbach, this naturalistic dialogue manifests itself as improvisational-feeling conversations that happen in layers. Baumbach’s film shows the disconnect between what we say and what the people around us hear. In ‘Pieces of a Woman’, this style of dialogue represents the family dynamics at play in the aftermath of the tragedy. For example, many scenes feature fast-paced dialogue between the characters that rely on nuance and a lack of communication between them.

Oftentimes, the dialogue is sporadic and layered, making it difficult to decipher exactly what one character is trying to communicate to the other. Unlike many Hollywood blockbusters, which place special importance on each word in a sentence, this film devotes almost no attention to the actual words the characters speak. Instead, it focuses on the subtext of each sentence. Though the characters are saying one thing, they mean another. During a conversation with her brother-in-law and husband, Martha replies in a sarcastic tone to a comment that Chris, her brother-in-law, makes. Chris and Sean are discussing Chris’s failed band when he makes a comment about the other members acting as if they are superior to him because they have children. Martha simply repeats what he says in a sarcastic tone, seemingly agreeing with him, but the edge in her voice is cutting. We see that even a comment as small as this, many months after her loss, aggravates all her feelings of grief again. The heart of the film lies in these nuances of daily interactions, the aggression that Martha feels coming from nowhere in particular.

Though the film lacks a narrative progression similar to the ones in Hollywood blockbusters, it instead focuses on portraying a realistic evolution of mourning. ‘Pieces of a Woman’ captures not only the heartbreak of loss but the road to recovery in a way that emphasizes the little moments, not the big displays of emotion. Healing from tragedy happens every day, whether we notice it or not, as our lives move forward and we are forced to make peace with the past. Ultimately, I would be shocked if this film doesn’t receive any attention from the Academy in light of the upcoming Awards. Vanessa Kirby’s performance is raw, intimate, and powerful, the long take itself is an achievement in the cinematic arts, and the dialogue captures the disconnect between family during a time of hardship almost perfectly. If you’re ever in need of comfort in the face of uncertainty or mourning, this film will surely help you feel like you are not alone, especially if you don’t express yourself through tears and outbursts.