Is Netflix’s, ‘Madame Claude’, A Biopic of Female Empowerment? Or Is It A Film of Female Suffering? 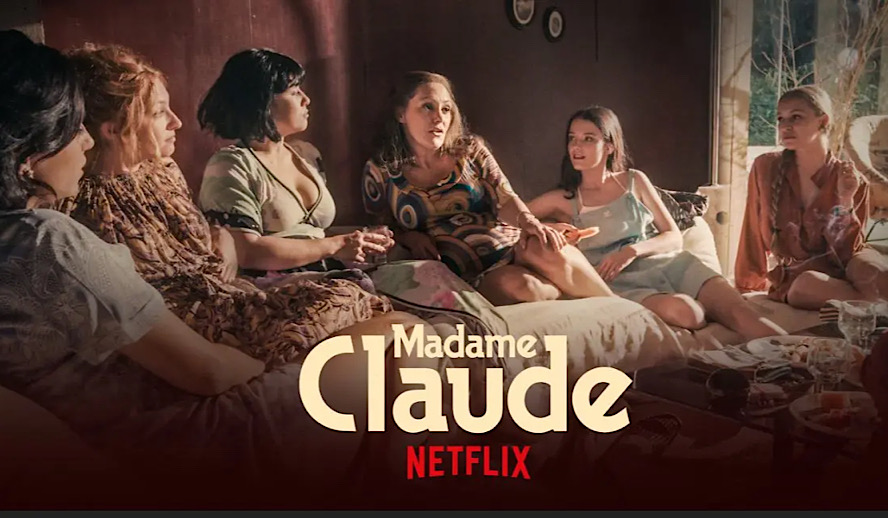 Who Was Madame Claude?

Just a few days ago, Netflix released the French biographical drama, ‘Madame Claude’, on its streaming service. This distressing, explicit biopic follows the rise and fall of sex work coordinator, Fernande Grudet. Taking place in the late ’60s, Grudet, a.k.a Madame Claude, recruits young girls around France as escorts, servicing an elite list of clientele. I went into this film blindly. I expected an abundance of commentary on sexual liberation for women and empowering elements within the film. I was sorely mistaken. There are a few moments of empowerment sprinkled in the story, but the film primarily displays the sexual, emotional, physical abuse, and exploitation of women in the prostitution business.

Although this particular film is a Netflix original, it has a 1977 predecessor under the title, ‘The French Woman’. Fernande Grudet was infamous for her leadership of this line of work. She was highly criticized for this, but surprisingly, this is not what led to her arrest. Grudet has an in with the French police force and even had some clients from within the profession. This served to protect her and her business for a while. Once she started losing her clients and her partners in crime, that protection dwindled away fairly quickly. Believe it or not, Grudet was hunted down by police and eventually arrested for a little over six million dollars in unpaid taxes. She attempted to flee France for the U.S. However, she was soon deported back to France for trial.

There are many moments throughout the film that are deeply disturbing and depressing. It is explicit in the brutality of individuals. The graphic nature may be triggering for some audiences.  ‘Madame Claude’ is based on a true story. This knowledge of the film made it so much more intense of an experience. The film forces you to remember that these are real individuals who went through these heinous situations, for the sake of being obedient to Grudet. The amount of power Grudet had, in her prime, is astonishing. Anyone who had crossed her would be met with brutal, grim punishment.

What makes this film even more thought-provoking, is the fact that a woman is behind all of the abuse and exploitation. Grudet abandons her family to fully embrace this life with her new family. As a viewer, there are times you will be conflicted over if Grudet honestly cares for the escorts, and displays a tough love motherly figure, or if she is simply manipulating and grooming them for her own financial and social profit. Though this mistreatment of women is accurate to the period in which this film takes place, is quite shocking nonetheless.

Keep Your Enemies Close, But Keep Your Friends Closer: Lessons Learned from The Film.

Grudet has a strict rule for her escorts. Clients are to be strictly referred to as friends. I am not sure if this rule is in place to remove suspicion when speaking of work in public, amount of pure courtesy This seems to be a major plot point in the film. Grudet’s friends are men of elite status that can help her cover up her crimes and support her financially. You watch in suspense as all of her friends turn their backs on her at her lowest point. The film holds on to the theme of a woman not being able to stand in the same room, let alone have the same positions as men.

Grudet uses the men in her circle, by preying on their weaknesses. In this case, the weakness is women. She is very intelligent in terms of street smarts, and you can tell she has been that way her entire life. The film alludes to Grudet being sexually abused from an extremely young age. This explains her cold personality and desensitization to sex and abuse. This could also be the reason she holds resentment to men in general and coaches her girls to become distant and cold-spirited.

What Makes Madame Claude And Her Story So Compelling?

If you consider yourself an empath, this film will truly play mind games with you. Fernande Grudet seemed to have a split personality of sorts, She was very hot and cold with her friends, family, and even lovers. It can be hard to connect with someone on who you can’t get an accurate read on. As viewers, it is hard to know if you hate her, respect her, or pity her. It is clear that Grudet only keeps those around that she feels can benefit her in some sort of way. She abandons her mother and her daughter, for her family and friends. Her family being her escorts, which make her money. Her friends being her clients, which give her status.

There is a moment within the film where Grudet confronts one of her girls about sleeping with her lover.  The girl comes to Grudet, visibly beaten and shaken up. It is clear Grudet had sent her to a job, with violent clients. that she knew wasn’t good for her. When the girl retaliates, Grudet refers to herself as the girl’s mother. Though not actually the girl’s mother, she sees herself as a guardian for these young ladies. Mothers are supposed to protect. Grudet does the opposite.

Despite this, you will catch these rare moments of Grudet crying, laughing, dancing, or just having a good time. This is very contrasting to her usual stoic, blunt demeanor. However, it reminds you that somewhere underneath the tough skin, there is a vulnerable and relatable woman. After all the wrong she has done to others by jeopardizing their safety and integrity, you can’t help but feel sorry for the woman. She talks briefly about suicidal thoughts and attempts. She is extremely unhappy with her life. She wants to love and be loved. She wants to have somewhat of a normal life. She just doesn’t know how to do it. The film is both tragic and cathartic. I believe it is a great watch that provides both a deep analysis of a person and history.