The Beauty of Platonic Love in Ed Helms’ ‘Together Together’ 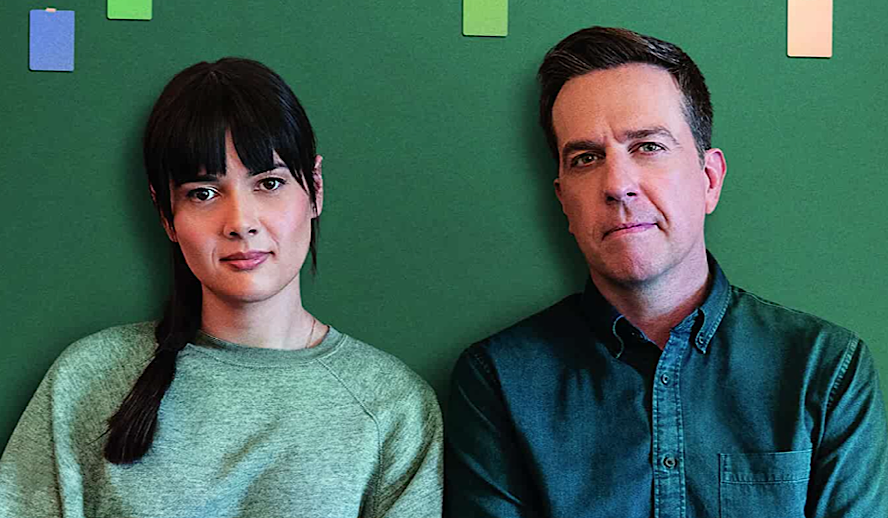 If you’re looking for a new type of romantic comedy, look no further. ‘Together Together,’ the new comedy starring Ed Helms and Patti Harrison, will undoubtedly not only fit the bill – it’ll exceed your expectations. The film follows a single, middle-aged man named Matt who wants to start a family, a new chapter in his life. He hires a 26-year-old woman named Anna to be his surrogate, and over the course of her pregnancy, they develop an odd beat friendship that proves even more valuable than romantic love. ‘Together Together’ premiered at Sundance Film Festival with glowing reviews and was just released in theaters worldwide.

At the center of ‘Together Together’ is the relationship between Matt and Anna – which begins with a very formal employer/employee dynamic. After all, Anna is being hired to carry Matt’s child. However, over time, the two begin to find similarities with each other and soon strike up a great friendship. Though they come from different backgrounds and are wildly different ages, they both identify with the other’s loneliness and sense of self. They are also able to learn from the other’s differing life experience – which comes from generational, gender, and age gaps. And on the surface, both Matt and Anna have a lovable awkwardness to them that makes their friendship seem so real and authentic – an honest representation of how friendship can come when we least expect it.

Furthermore, perhaps the greatest thing about this friendship is that it is never tinged with any sort of sexual undertones. These boundaries are never crossed – even toyed with for the sake of exhibitionism – which is unusual to see in an industry that loves to pair older men with younger women. In fact, the film even comments on the inappropriateness of this practice in a scene where Anna chastises both Woody Allen and the wide relationship age gaps that regularly appear in his films. This type of “fantasy” is simply immoral and should be treated as wrong – because in real, non-movie life, it is.

In this way, ‘Together Together’ feels like an unexpected, fresh film. But it also feels normal, as if it is correcting some sort of error on the industry’s part. Matt and Anna are simply friends, and as she is carrying his child, there are boundaries not to be crossed. This rejection of romance and sexual tension ultimately makes the characters extremely likable. Amplify that with grounded, funny performances from Helms and Harrison, and you’ve got an incredibly palatable movie.

‘Together Together’ – It All Starts with the Script

In addition to upending tropes in the romantic comedy genre – ‘Together Together’ is simply a well-done film. To start, the writing is really wonderful, thanks to powerhouse Writer/Director Nikole Beckwith. The script has such a comedic yet honest tone that really makes it likable from the get-go. It’s not overtly trying to be funny, but rather feels like the natural sort of humor one experiences in everyday life – all awkwardness included. The dialogue and rapport make the film feel smart, with no time wasted, and the total running time clocks at just an hour-and-a-half. This gives the impression that there’s no silly business in the movie; it’s making sure it says exactly what it wants to say, in the least number of scenes possible. It isn’t superfluous – in an odd way, it feels like it’s respecting audiences’ time and intellect.

Not only that, but the world of the story is populated with such endearing characters too. Even the smaller ones, such as a therapist played by Tig Notaro or a coffee barista played by Julio Torres, have a great sense of charm. They do a wonderful job of supporting Matt and Anna’s story, while still shining in their respective scenes. One fun fact about the film is that most, if not all of its actors, come from stand-up comedy backgrounds, which could definitely be a reason why the film is so effortlessly funny throughout.

Of course, Beckwith should also be applauded for ‘Together Together’s’ unique premise itself, which already gives the film a huge draw. All in all, this feels like a story we haven’t seen before, in a really good way.

Something unique about ‘Together Together,’ compared to other films released as of recent, is that it is exclusively playing in theaters. That’s right – you won’t be able to find it on any streaming platforms (at least until the theatrical window closes). So, the question is – is it a movie worth going to the theater for?

If the former part of this review hasn’t convinced you yet, the answer is an overwhelmingly yes. Of course, this is assuming that theaters are open in your area and you are able to safely attend. For one, the film is an uplifting and positive story that will make you smile throughout. It’s based on the very best parts of the human experience, as well as the beauty and excitement of new life. It highlights friendship and platonic love, which is something that we’ve all felt to be important in our lives, but perhaps haven’t seen it reflected in film. Ultimately, this is a great film to watch as we come out of the bleak COVID-19 world and look toward a more hopeful, fruitful future.

Furthermore, there are a plethora of other reasons why going out to watch ‘Together Together’ would be a great night out and a reintroduction to the movies. It’s a way to support your local theaters, which have been shut down for over a year due to the pandemic. With the closure of small movie chains such as the beloved Arclight in LA, the threat of theaters closing forever is very real, even as COVID-19 restrictions begin to be lifted. It’s also a way to support independent films – with ‘Together Together’ being a fairly small and empathetic story. And lastly, it’s a way to support female filmmakers, with the movie being written and directed by the incredible Nikole Beckwith.

Whatever it is, there are many reasons why ‘Together Together’ is the film we need right now. So, if you’re looking for a new type of film, something that feels good and uplifting, this is definitely the one for you!

‘Together Together’ is now playing in theaters worldwide. In AMC Theaters showings, a special Q&A with the director and cast will play after each screening.