Marvel Hits Big Yet Again With ‘Eternals’, A Gorgeous Film With Powerful Performances 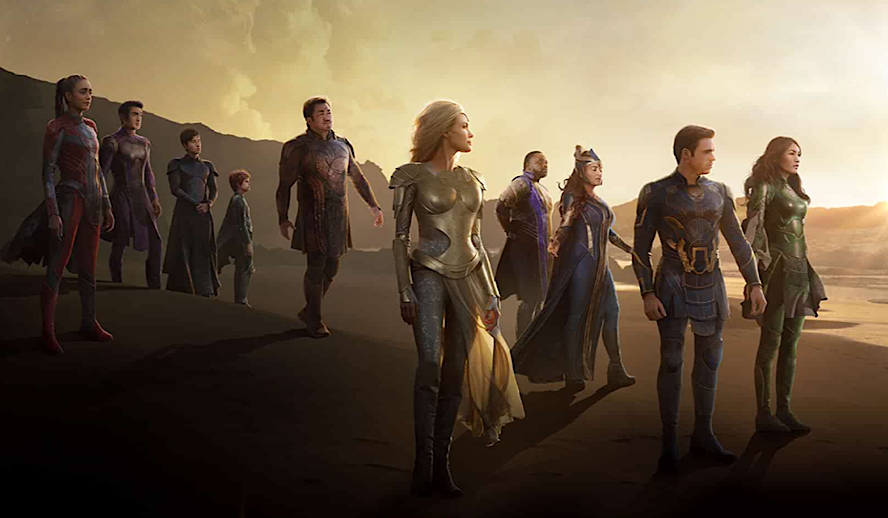 After the release of ‘Avengers: Endgame’ and ‘Spider-Man: Far From Home’ back in 2019, Phase 3 of the Marvel Cinematic Universe (MCU) had finally finished and the Infinity Saga as a whole had come to a close. Many fans and critics were left wondering what was next in-store for these beloved heroes and the franchise as a whole. To much surprise, Marvel answered by announcing their upcoming slate of film and television shows that would start a new beginning for the MCU. With shows like ‘WandaVision’, ‘The Falcon and the Winter Soldier’ and ‘Loki’ out this year, along with movies like ‘Black Widow’ and ‘Shang-Chi and the Legend of the Ten Rings’, Marvel has had a busy year fleshing out Phase 4 of their cinematic universe, and they continue this with their newest film, ‘Eternals’.

‘Eternals’ is a film that has carried much prospective hype and intrigue with it over the last couple of years for many reasons. For one, the comic series has been known to be a bit confusing and hard to follow, and many wondered how the comics could be adapted for the big screen. It helps that Kevin Feige and his crew hired Chloe Zhao to helm the film. Zhao, a skilled (and now Oscar-winning) director, is a big fan of the ‘Eternals’ comics and wanted to put her own spin on it. Does she succeed? Mostly. There are some minor issues with pacing and character development that could have been executed better. But for the most part, Marvel’s ‘Eternals’ is a great movie, one of the MCU’s best, and shows why Marvel is as successful as they are now.

Who and What are the Eternals?

Based on the comic books from Jack Kirby, ‘Eternals’ follows a group of immortal beings known as the Eternals, who came to Earth in the early dawn of human history and have been living amongst people for thousands of years. These aliens have been watching humanity grow and evolve, while doing their best to stay out of the way. They’ve been sent there by their leader, a gigantic cosmic entity known as Arisham, who’s given them the task of destroying another alien race on Earth called the Deviants, who have become apex predators that target humans and Eternals. Together, the Eternals wiped out the remaining Deviants in 1500 A.C. before disbanding. Now, it’s the present day, 5 years after Thanos used the Infinity Gauntlet to wipe out half of all life in the universe and set after ‘Avengers: Endgame’. The Eternals, all living different lives, come to find that the Deviants have returned. Now they have to come together to find them and kill them once again, hopefully, to put an end to them for good.

The Eternals are made up of 10 members. Despite the ensemble cast, the film mainly focuses on Sersi (Gemma Chan), an Eternal who feels connected to Earth and its people. There’s also her ex-lover Ikaris (Richard Madden), who has a Superman-like sense of heroism surrounding him. Ajak (Salma Hayek) is the leader of the Eternals and the one who speaks to Arisham directly. The rest of the team is made up of Thena (Angelina Jolie), Kingo (Kumail Nanjiani), Phastos (Brian Tyree Henry), Sprite (Lia McHugh), Makkari (Lauren Ridloff), Gilgamesh (Don Lee) and Druig (Barry Keoghan). Each Eternal has their own type of power. For example, Druig has the power to manipulate people’s minds while Thena can create swords and weaponry out of pure energy. Together, they’re all a makeshift family that works together to take down the Deviants they must destroy.

A Big Ensemble With Character Focus

One aspect I can really appreciate about the film is that it finds a way to establish all of these Eternals as different people with their own personalities. We have someone like Ajak, who displays a calm, motherly attitude towards others, or there’s someone like Phastos, who’s a brainiac that’s obsessed with technology. With so many members of the Eternals and limited screen time, some characters get sidelined more than others. But even as some take priority over others, none of them feel shoehorned in or as if they’re barely there. It’s a wonder that Zhao is able to juggle all of these different characters and still make them feel prominent.

All of these characters have their own dilemmas and moral issues that carry throughout the film. Sersi has to learn to take charge of the Eternals and the return of Ikaris, who left her out of the blue centuries ago. Thena deals with a deteriorating mental state and struggles to stay herself. Meanwhile, other members struggle with their faith in humanity. While Sersi and Kingo feel a connection to Earth and its people, others like Druig and Phastos have become disillusioned with mankind’s constant fighting and wars and choose to stay out of it. There’s many moral dilemmas and grey issues that ‘Eternals’ presents and it makes the movie that much more engaging to watch.

That’s one thing many aren’t going to expect going in to ‘Eternals’: It’s not your average Marvel movie. Sure, there’s action, but much of the film’s conflict comes from verbal discussion, where the Eternals are just standing in a room and arguing about their issues. That probably sounds boring, but trust me, it really isn’t. Chloe Zhao presents these characters with such different personalities that it makes every conversation between them feel weighted in the best way. While I enjoyed every one of them, my personal favorites were Gilgamesh, a big man with a big heart, and Kingo, who provided a lot of the film’s comedy while also being more than just the comic-relief character. His leading-man Bollywood-star arrogance makes him a treat to watch on-screen. A special shoutout goes to Harish Patel as Karun, Kingo’s Bollywood  manager who accompanies him to the Eternals’ meetings and documents them all on camera. One of the film’s biggest laughs for me came when he kept pulling out cameras from his bag, or honestly any of his interactions with Kingo.

But besides that, ‘Eternals’ didn’t really feel like a Marvel film, and that’s a good thing. This movie felt different, as it strayed away from the heavier comedy elements we’re used to seeing in an MCU film. If there’s any flaw with it, it’s that the pacing felt somewhat off in the beginning. The movie jumps right into the action almost immediately, and while there was a lot for Zhao to cover in order to define the Eternals, it still felt rushed in some parts. But still, she makes use of the bloated 2 and a half hour runtime, and I have to give credit for fitting all of those backstories and explanations into that while still telling a great story.

Overall, ‘Eternals’ was a really good film and a fine addition to the MCU. Even with a rushed pacing in some parts, it told a well-crafted story that looked gorgeous and also made you think. ‘Eternals’ is definitely the most beautiful-looking and ambitious film in Marvel since 2018’s ‘Black Panther’, and I wouldn’t be surprised to see it generate some buzz during the awards season in a few months. Given Zhao’s track record, it’s no wonder this film is as good as it is, and I’d be looking forward to seeing more from her in the future. And with the MCU, I hope we see more of the Eternals in the future. I mean, hey, with Tony Stark and Steve Rogers gone, our planet could use some more heroes.