Emma Stone’s ‘Easy A’: A Teen Rom-Com for the 21st Century 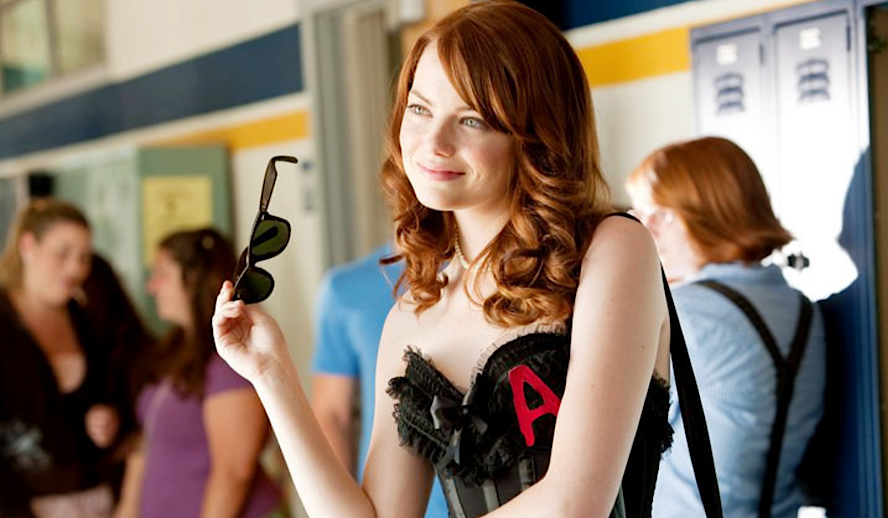 It’s been 11 years since the release and this witty, self-aware comedy starring the now Oscar winner and American sweetheart Emma Stone, is still just as much fun as ever. As a movie filled to the brim with commentary over topics like slut-shaming and the fickleness of the rumor mill delivered by an eccentric cast of characters with impeccable comedic timing, this classic is always worth another rewatch.

‘Easy A’, a 2010 comedy film written and directed by Will Gluck, earned an easy A in the eyes of film critics and viewers with its’ postmodernist commentary and perfect casting at the beginning of a new era of teen films. It begins with narration – somewhat of an essential for films in this genre – from our sarcastic protagonist, Olive Penderghast (played by the effortlessly charming Emma Stone), a self-proclaimed ‘non-entity’ in the complex ecosystem of her California high school. After a slow-pan through sunbathed trees and the bustling, open-concept halls of Ojai North High, we finally meet her: bright, somewhat plain, and soon to embark on the self-imposed vandalism of her previously spotless reputation. In what is potentially one of the first movies to use the now-familiar webcam ‘vlog’ format for storytelling, we are provided with a virtual recollection of the evidence, if you will. You see, this is going to be about her side of the story, the right one.

What begins as a lie turns into an opportunity when school evangelist, Marianne, overhears Olive spilling some (completely fabricated) salacious details about a weekend rendezvous with a college boy to her best friend, Rhiannon. This lie spins her reputation from homely to harlot, turning an invisible girl into a bright, red, sexy ‘X’ on the map seemingly within a matter of minutes. Struck by her newfound relevance and spitefulness towards her peers’ reaction to her perceived promiscuity, she leans into provocation and vows to turn herself into the ‘dirtiest skank they’ve ever seen’. What ensues is the pleasantly self-aware tale of a 21st-century trollop and her quest for redemption.

A Lady’s Choice and a Gentleman’s Agreement

This movie is star-studded. Emma Stone as the snarky every-girl protagonist with biting wit and awkward charm. Amanda Bynes as Marianne, the god-fearing, over-achieving antagonist in argyle sweaters and a dainty cross necklace, whose self-assured piety is just assertive enough to provide Stone with a worthy opponent.

Alyson Michalka (of ‘Aly & AJ’ fame) as Olive’s hot-headed blonde best friend who acts as a catalyst for the films’ events. Penn Badgley (peri-’Gossip Girl’ fame) as that charming guy you almost dated in middle school. Throughout the film, screen legends Stanley Tucci and Patricia Clarkson will be your favorite side characters as potentially some of the best teen comedy parents of all time. The palpable chemistry that these two have with one another as well as with Stone are what make this part of the story feel so grounded; Olive is a unique protagonist, and a set of parents as idiosyncratic as Tucci and Clarkson give her character the loving context to express her whip-fast cleverness without seeming disingenuous.

Lisa Kudrow gives a slightly unhinged performance as the school guidance counselor who needs counseling more than anyone. Thomas Haden Church is a dry intellectual as the resident cool English teacher (as is necessary for a coming-of-age film) who sees through Olive’s crude façade. While both do well with what personality they’re given, their characters are, disappointingly, less fleshed out and more forgettable in the grand scheme.

‘Easy A’ – The Accelerated Velocity of Terminological Inexactitude

‘Easy A’ is a movie that comments on sex and virginity in a way that teen comedies had yet to do. Almost completely bypassing the raunchiness of other films where the pursuit of sex is the plot, the idea of Olive’s virginity is compromised early in the film, making way for a new narrative about what happens after a girl ‘loses it’ and what becomes of her reputation. Because of this, ‘Easy A’ feels unmistakably modern. Instead of eagerly waiting for the nerd to seduce the girl, we see a plain Jane trying to navigate the perils of slut-shaming driven forward by a sub-plot of religious persecution. Unlike other classics such as ‘Clueless’ or ‘10 Things I Hate About You’, the film treats its’ 19th-century source material – The Scarlet Letter by Nathaniel Hawthorne – as more of a reference than a blueprint, instead utilizing the novel as a basis for the major themes: ostracization, judgment, shame, the fickleness of gossip, and the flaws of binary moralism.

The script, though packed with snappy punchlines and pop culture references, always manages to smooth out the edges with well-placed sensitivity, reminiscent of the quick-witted dialogue in late-2000’s comedies like ‘Juno’ or ‘Jennifer’s Body’. Beneath the veneer of almost-too-hilarious characters and nostalgia for 80’s clichés, each member of the story delivers something authentic to the narrative, resulting in a film that is refreshingly tangible and heartfelt.

The film, unfortunately, dates itself with its’ slightly sloppy treatment of homosexuality as a plot device. While not completely insensitive, treatment of the topic lacks subtlety and is played almost exclusively for laughs. The only gay character, Brandon, played by Dan Byrd, is relegated to a living MacGuffin. Despite this, the film does well in satirizing homophobia with the ridiculousness of characters like Marianne and her followers, but it’s unfortunate to think that with a little bit of TLC to this part of the storyline, Easy A easily could have taken the complexity of its’ social commentary to the next level.

Not With A Fizzle, But With A Bang

This film is, most of all, a vessel for the very talented Emma Stone. Effortlessly acerbic and adorable, it’s no wonder that this performance would closely pre-date her launch into superstardom with box-office hits like ‘The Help’ and ‘Crazy, Stupid, Love’. Impressive supporting performances from Tucci and Arquette, as well as Bynes, provide gleaming highlights throughout. While the film dates itself in some ways, and though some side characters feel slightly underwritten, it is certainly ahead of its time with wry commentary on slut-shaming, sexuality, and the old rumor mill. Charmingly witty and often pleasantly over-the-top, this movie certainly deserves a place on the running list of great teen comedies of the 21st century.