Summarizing All Seasons of ‘Friends’: The Hit Sitcom that Has Made Us Laugh for Decades 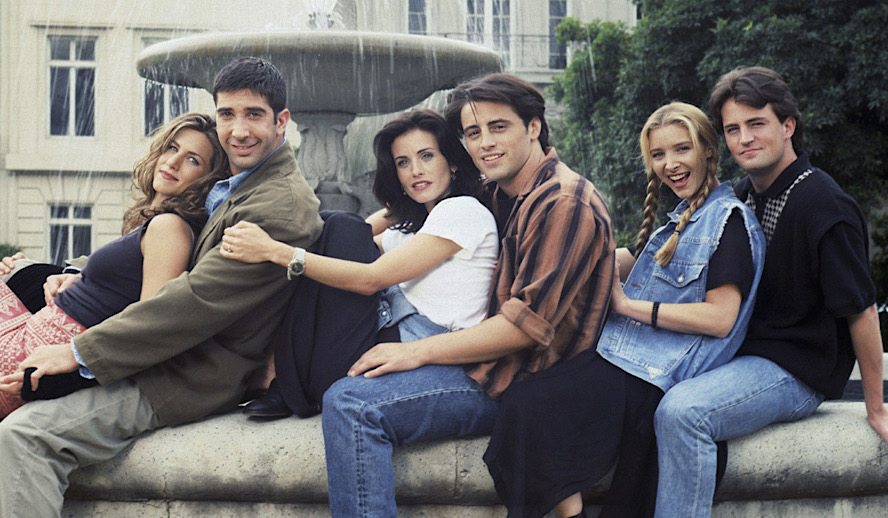 It’s time to pivot towards one of the most iconic sitcoms in television history. ‘Friends’ ran from 1994 to 2004 with a whopping 236 episodes in a span of 10 seasons. The show was created by Marta Kauffman and David Crane.

The name for the show didn’t come naturally and previously had numerous titles such as ‘Insomnia Café,’ ‘Six of Us,’ and ‘Friends Like Us’ until the title for the show was finally chosen as ‘Friends.’

Who can forget the famous theme song, I’ll Be There For You, sung by The Rembrandts? It has been drilled into our heads for almost three decades now. The iconic opening sequence has the cast dancing in and around a fountain. Once the sequence ends, the cast sits down on the iconic Central Perk couch with their backs facing the television screen and the screen gradually turns black.

Kauffman revealed in an interview with The Hollywood Reporter that the theme song is what boosted the interest of NBC executives. They believed it made the show more joyful.

The premise of the show follows a group of six friends: Rachel, Monica, Phoebe, Joey, Chandler, and Ross. Kauffman and Crane came up with the idea for the sitcom based on their real-life experiences together. In an interview with The Cut, Kauffman explained, “When David and I lived in New York, we had a group of six friends. We were all each other’s best friends. We hung out all the time; we were like a family. So later, when we were thinking of shows that could have an ensemble cast, it occurred to us to look back at that point in our lives. That was the birth of the idea for ‘Friends’ — that time in your life when your friends are your family.”

On May 27th of this year, ‘Friends: The Reunion’ special premiered on HBO Max which had fans jumping for joy.

The One With All the Writing

There is no question that ‘Friends’ is known for its iconic one-liners and hilarious jokes. Crane and Kauffman served not only as creators and producers but also writers for the series.

There are many lines that we all still quote to this day. In “The One With Unagi,” Ross tries to teach Rachel and Phoebe about the art of Unagi. At one point in the episode, Ross scares Rachel and Phoebe while screaming “Danger!” at them. Rachel and Phoebe decide to get back at him so they hide behind curtains in his apartment and scare him. Rachel says, “Ah, salmon skin roll,” while Ross is screaming like a girl.

It is well-known that Ross and Rachel are one of the most iconic couples on TV. These two have captured our hearts for several years and go through a bunch of obstacles throughout the show’s run. Schwimmer and Aniston shared great chemistry off-screen so they put that chemistry to the test on-screen. Their chemistry paid off extremely well.

There is no doubt that the writing in this show stands the test of time. It’s not just about the jokes or iconic lines, the writers made sure that the show was funny but also that it was relatable and heartfelt.

The series addresses important issues such as surrogacy, adoption, single-parenting, infertility, and same-sex marriage. Many of these issues that were addressed were ahead of their time.

The One With All the Iconic Characters

Rachel Green is portrayed by Jennifer Aniston. Rachel takes on the spoiled stereotype in her first few appearances but goes through a lot of changes in later seasons. She is the most fashionable out of all the friends as she has a huge interest in the world of fashion. Rachel has a lot of relationships during the show’s ten seasons. She opens the show up in the pilot episode which makes her a significant character throughout the show’s run.

Monica Geller is portrayed by Courteney Cox. Monica has a strong personality which is what drew Cox to her. When she knows what she wants, she stops at nothing to get it. She can be loud and an avid control freak. Monica announces several times throughout the show that she wants to have children. Like Rachel, she goes through quite a few relationships during the show’s run. She has a passion for cooking and wants to be a chef. You’re probably thinking, “I know!”

Phoebe Buffay is portrayed by Lisa Kudrow. Phoebe is the most eccentric out of the three women. She has a unique sense of style. She has quite a few partners throughout the show as well. Phoebe is a masseuse and a musician. Phoebe has a twin sister, Ursula, who originally appears in the sitcom, ‘Mad About You,’ as a waitress and periodically appears in ‘Friends.’

Joey Tribbiani is portrayed by Matt LeBlanc. The not-so-bright character is extremely lovable and does have moments where he comes up with great ideas. Joey is an actor who starts out in theater and eventually makes it to the small screen. We need to ask an important question, “How you doin’?” The famous catchphrase has become Joey’s trademark along with his love for sandwiches.

Chandler Bing is portrayed by Matthew Perry. Chandler uses sarcasm when he is in uncomfortable situations. He is sarcastic and likes to make jokes to make people feel uncomfortable. He goes through many relationships but one that stands out is his relationship with Janice. Janice (portrayed by Maggie Wheeler) is loud-mouthed and goes in and out of Chandler’s life. All there is left to be said is: “Oh my God!”

Ross Geller is portrayed by David Schwimmer. Ross is a paleontologist. Yes, he studies dinosaur bones. He is analytical and Monica’s older brother. Schwimmer was the first to be cast in the show because the creators developed the character with his voice in mind.

What makes these characters so beloved and interesting is how different they all are. They all have their own quirks and that’s what makes them all stand out individually.

Along with the six main cast members, many of the guest stars who appeared on ‘Friends’ went off to do bigger things in the film and television industries.

The main cast instantly became best friends and continue to stay in touch with each other all these years later.

The One Where We Find Out How the Show Was Shot

Perry, who portrays Chandler Bing, expressed how he had anxiety when he was filming episodes. He was worried whether the audience would laugh or not at the lines he would deliver during filming sessions.

The episodes averaged 22 minutes each and would take several hours to film. The show uses multi-camera shots. The shots, for the most part, are continuous and follow each individual character or the group. As far as editing goes, there are some scenes that are quick and some scenes that are long. For example, one of the shots in “The One With the Prom Video” is long and follows Rachel as she walks through the apartment to get to Ross. This scene is a pivotal moment for the couple.

The iconic episode, “The One Where No One’s Ready,” was filmed entirely in Monica’s apartment with just the main cast members to save money. The episode revolves around the friends getting ready for a black-tie benefit that is being held at the museum where Ross works. As you can imagine, chaos ensues. We better not do any lunges, right?

The series was never filmed in New York City but at a Warner Brothers studio in California which is hard to believe because it looks like it was filmed in NYC. The opening credits were filmed in Burbank, California.

The One Where ‘Friends’ Has Made a Lasting Impact

The show has grown to be a huge success with its reruns on cable television and the ability to watch it on HBO Max and other streaming services.

When the show debuted, many female fans fell in love with Rachel’s hairstyle so much that they cut their hair to look like her. Eventually, the hairstyle was named “The Rachel.”

A cookbook that features recipes from the series is supposed to hit Amazon in September of this year. You’ll be able to make all those recipes right in your home? Could this BE more exciting?

The song “Smelly Cat” sung by Phoebe Buffay in the series became a major hit. Kudrow performed the song alongside Taylor Swift at one of her concerts in 2015.

The hit sitcom has brought endless joy and laughter into our homes for years. The show has been there for us when we are sad and need a pick-me-up. When Rachel sought out Monica at “Central Perk” in the pilot, she did so even knowing that they hadn’t seen each other for several years. In the end, your friends will always be there for you no matter what. Just like that, ‘Friends’ will always be there for you.