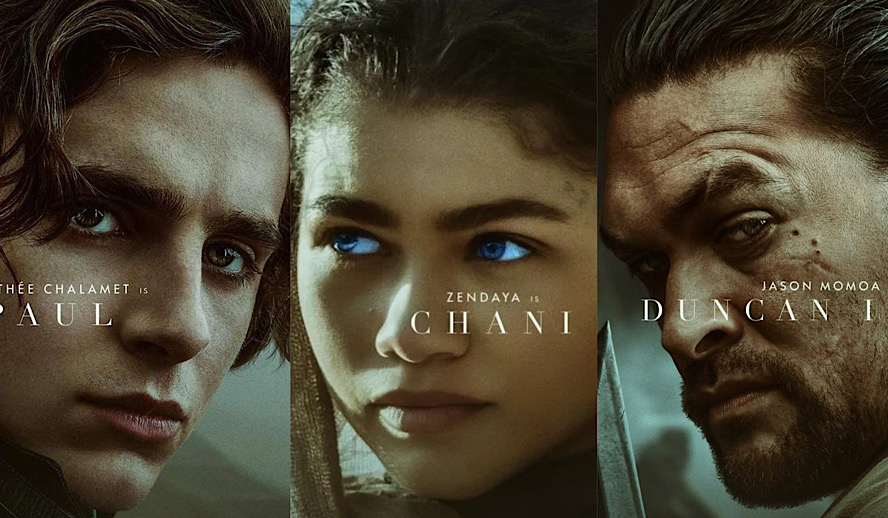 Denis Villeneuve’s highly anticipated film ‘Dune’ is set to hit theaters and HBO Max on October, 22nd 2021. The star-studded film, which boasts names like Oscar Isaac, Rebecca Ferguson, Timothée Chalamet, Jason Momoa, Zendaya, and more has been in the works for some time – delayed time and time again due to COVID-19. On Thursday, Warner Brothers and Legendary, the two studios behind ‘Dune,’ hosted an exclusive first look at the film at IMAX theaters across the countries. The revealed footage won’t be available to the public, save for the new official trailer that was dropped today, so here’s a summary of what was shown at the screening!

First 10 Minutes of the Film

To the delight of the audience – we were first surprised by an exclusive clip of the first 10 minutes of ‘Dune’. A generous offering, the clip also contained a magnanimous reveal at its start, as the footage began with a title card with the text: ‘Dune: Part One’. Yep, we’re getting a sequel! While this possibility has been discussed before, it hasn’t been 100% confirmed before. Now, we know for sure that Part One will follow the first half of the ‘Dune’ novel, with Par Two likely finishing it off. Of course, there are many novels in the Dune series, but as they are hefty, it’s assumed that these initial films will be tackling the first one.

In the 10-minute clip, we are looped into the story by Chani (Zendaya) – a member of the Fremen people, local to the planet Arrakis. She explains that the lands of Arrakis are ridden with an addictive drug called the “Spice” – making it an important planet, despite its arid and unlivable climate. Because of its viability, it is constantly being harvested by its oppressive government, helmed by the Harkonnens. “Their cruelty to our people is all I’ve ever known,” she says. Now, the leadership is transferring over to the House Atreides – another leader, another oppression…

Director Denis Villeneuve has spoken before about his push to elevate female characters in his adaptation of ‘Dune’ – and this opening sequence seems to confirm that. In the novel, Chani is a character that appears much later on, though she consistently appears in the dreams of Paul, the protagonist of ‘Dune’. Focusing on her at the very beginning of the film not only gets us into the story quickly, allowing us to understand the politics of this world, but it teases that she will be an even bigger presence than we expected.

Next, we were surprised with an even bigger reveal – a whole sequence from the film. In this sequence, which was around 10 minutes as well, we were introduced to the Sandworms of Arrakis. These are massive, deadly creatures summoned by vibrations in the ground. When harvesters attempt to extract spice with their large machines, this creates vibrations in the sand, which in turn attracts the Sandworms. In this scene, it is not only our first introduction to them but the characters’ as well – and we see them having to process and adapt to the presence of this gigantic threat. As Paul (Timothée Chalamet) and Duke Leto (Oscar Isaac) witness a spice harvesting machine unable to escape from the Sandworm’s wrath – they must decide to jump in and save the men on board, ushered by a ticking clock.

Without giving away too many spoilers, I’ll just say one thing. The cinematography and visuals of ‘Dune’ are truly magnificent. With creatures like the Sandworms, and the sheer size of the literal dunes and deserts in the film, the film is on a scale like no other. It’s truly tremendous to see – a film that feels so large in scope, so ambitious.

Dune Behind the Scenes and Cast Interviews

The screening was also accompanied by BTS footage from the shoot, narrated over by various interviews from the cast. The footage teased ‘Dune’’s sleek sci-fi style, which feels grounded and ancient, but new and inventive all the same. Again, the footage reaffirmed the massive scale of the film, which truly feels out of this world. There are a plethora of planets, societies, and cultures to explore. ‘Dune’ will no doubt be the next ‘Lord of the Rings’ – the next big high fantasy IP. At the very least, it has the potential to be.

We also learn from the cast their individual attractions to ‘Dune’ – and why it was so important for them to become involved. While some were familiar with the source material before shooting and others weren’t, one through-line seemed to be clear. ‘Dune’ is a story that feels universal, that feels so connected to the experience of being human. It’s about humans versus humans, humans versus nature, and the rise and fall of different regimes as society develops. It’s “a story we intrinsically all know” – translated into a massive, sci-fi setting.

Another promotional snippet of the film was screened – this time a small segment on the score of ‘Dune’ with legendary composer Hans Zimmer. In the segment, Zimmer and Villeneuve discuss their journey in creating the sounds of Dune, which feel incredibly unique and otherworldly. He surmised how he wanted to create “new” instruments, new sounds that felt like they came from entirely different societies and planets.

Famously, he turned down the composer role for ‘Tenet’ with longtime collaborator Christopher Nolan to do ‘Dune’. Zimmer made this decision because, like Villeneuve, ‘Dune’ was a story he grew up with and was close to his heart. And that’s what makes ‘Dune’ already feel so personal. Even though it’s a gigantic film, it’s being made by people who are truly loyal to the IP and have been dreaming about bringing it to life for quite some time.

At the end of the night, the special event revealed the new trailer for ‘Dune’, which is now available to watch publicly. This new, official trailer is far more explosive than its teaser, leaning more on the illustration of warfare and conflict in the film, rather than its silent, ethereal moments. It was a smashing end to the night – leaving a very happy audience, fulfilled. October 22nd can’t come fast enough.

Dune will be released in theaters and HBO Max on October, 22nd 2021.