‘Deadly Illusions’ And The Mental Health Conversation We Need To Have 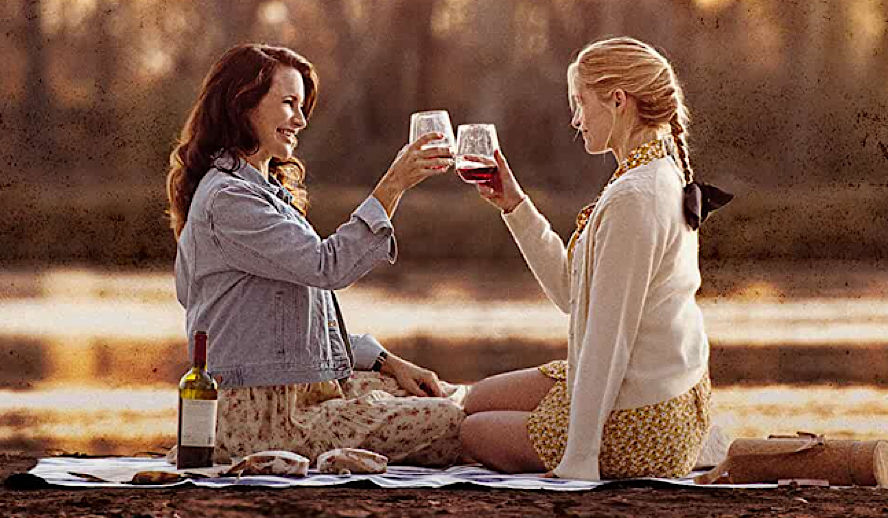 The thriller film genre is defined as “giving viewers heightened feelings of suspense, excitement, surprise, anticipation and anxiety.” Many times, thrillers use a character’s anxiety or deteriorating mental health as a means of creating tension and plot in the film. In the new Netflix film ‘Deadly Illusions’, writer/director Anna Elizabeth James does exactly that: makes mental health seem like an illusion; something that can be brushed under the rug once it no longer matters to the main character.

‘Deadly Illusions’ follows best-selling thriller novelist Mary (Kristin Davis) who has just agreed to write an additional novel for her book publisher while dealing with financial problems with her family. As a way to focus more on her writing and getting over her writer’s block, Mary and her husband (Dermot Mulroney) decide to hire a nanny to watch her kids. Upon getting to know their nanny, Grace (Greer Grammer), Mary begins to have trouble telling the difference between her real life and her novel.

‘Deadly Illusions’ Is A Dangerous Portrayal Of Mental Health

One of the most consistent things that ‘Deadly Illusions’ does is question the mental health condition of Mary the further into planning her novel she gets. She thinks she is growing closer to Grace, from taking her shopping for lingerie to going on a private picnic with her, but the reactions of those around her make her question whether she is actually experiencing those things or if she’s dreaming them. After having what she thought was a real sexual encounter with Grace she begins to truly spiral and question whether she has a grip on reality or not as does her husband, best friend Elaine (Shanola Hampton), and the police at one point, even asking her what kind of psychosis she has been diagnosed with.

By the end of the film the audience finds out what really was going on and it ultimately leads to all of the problems Mary thought she was having simply disappearing as if they never existed. This is a problematic narrative because it diminishes the importance of mental health. Having a narrative that stigmatizes mental the way ‘Deadly Illusions’ does is highly problematic because it essentially says that mental health problems are something that will simply “go away” with time and that is not at all true.

According to the American Psychiatric Association, Mary built up a self-stigma, which they describe as “the negative attitudes, including internalized shame, that people with mental illness have about their own condition.” She avoided telling anyone what is going on out of fear of shame and them not believing her; she feared people thinking she was crazy. Internalization prevents an individual from being able to get proper help because they do not want others to know what they are going through and do not see a solution to their problems.

The Mental Health Discussion We Should Be Having On Screen

Films such as ‘Deadly Illusions’ promote the stigmatization of mental illness when we really need more films promoting positive actions and behaviors surrounding mental health. One of those ways is to actually follow through with the storylines using mental illness as a key component. It was clear during ‘Deadly Illusions’ that Mary did indeed have some kind of mental illness that went unaddressed as the film ended; it seemingly just disappeared. Especially after what she went through in the film there is no way there would not be some kind of therapy she would be in to address her traumas and the effects that writing her novel seemed to have on her. Had they included some scene or discussion of treatment, it could have shown and helped normalized mental illness treatment.

According to the American Psychiatric Association, one of the best ways to reduce mental illness stigma is by interacting or hearing from people who have been dealing with long-term mental illness and treatment. They report that three in four teens go online to find personal anecdotes from people who have suffered from mental illness, specifically depression, in the past and that “90 percent of teens and young adults experiencing symptoms of depression are researching mental health issues online and most are accessing other people’s health stories through blogs, podcasts, and videos.” With that information, it is even more important to make sure that media, especially movies and television, make an effort to portray stories of mental illness and treatment that highlights the good that can come from discussing it and getting treatment.

So many people get their understanding of mental illness and mental health care from film and television which means there needs to be more thought put into how these are shown on screen. The International Society for the Study of Trauma and Dissociation issued this statement after the release of M. Night Shyamalan’s ‘Split’, a film which uses the same mental illness as ‘Deadly Illusions’: “depicting individuals with this, or any other mental health disorders, does a disservice to his artistic ability and to the over 20 percent of the population who, at some time or another, struggle with some form of mental illness.

It acts to further marginalize those who already struggle on a daily basis with the weight of stigma.” If we expect people to be open to getting mental health help we need to stop associating it on screen with evil and negative behavior; we need to make sure it is shown as being a normal thing to have mental illness and that getting help is a good thing, and that is something ‘Deadly Illusions’ definitely does not show.