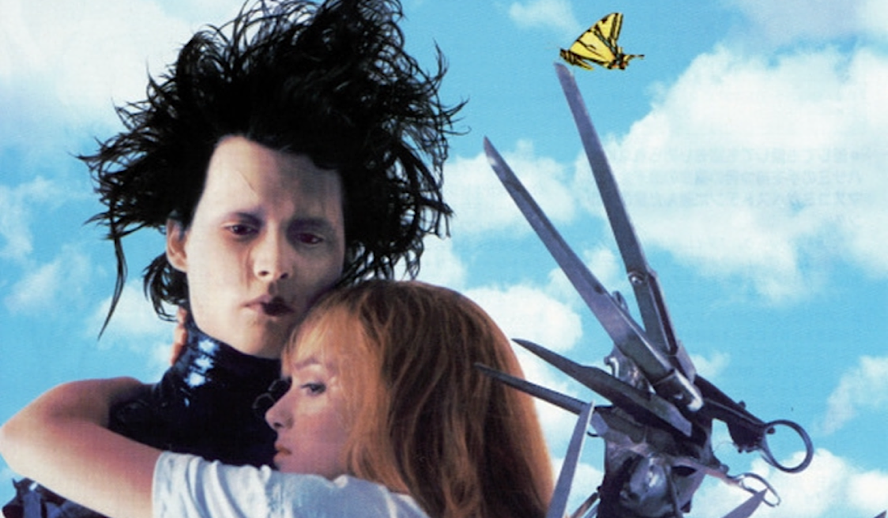 Tim Burton’s Edward Scissorhands has passed the test of time. Over the past three decades, this classic fairy tale’s universal – yet deeply personal – narrative has only become more compelling than its Frankensteinesque plot may suggest. For those who still have yet to see it, the film follows its title character in his satirical and profoundly emotional exploration of suburbia. Edward, played by Johnny Depp, is somewhere between man and machine, living alone in a foreboding mansion. When Avon Resident Peg Boggs, played by Dianne West, stumbles upon Edward, a moment of sympathy compels her to take him in. Things start to get complicated when Edward catches feelings for Peg’s daughter, Kim, and the townsfolk begin to sensationalize his bladed fingers. What follows is a reflection of our society’s misperceptions of those who are, as Burton would say, only different.

With the caliber of filmmaking present, it is evident why many refer to the film as Burton’s best. Everything is masterfully crafted, from the satirical and emotionally jarring script, gorgeous color palette, and stylistic cuts, to the eerie score, fantastic performances, and hand-crafted sets. The screenplay, developed by Burton and written by Caroline Thompson, does this tale justice. Quirky humor and fantastical moments juxtaposed with disturbing realities and despicable antagonists make this film feel distinct from any single genre label. With a consistently neutral face and silent demeanor, Edward’s emotions are almost entirely shown through his eyes, with an occasional mouth twitch. Johnny Depp delivers his career-defining performance as Edward with elegance, allowing us to understand the character’s innocence and longing for connection. The rest of the cast provide some equally impressive performances. Winona Ryder believably manifests Kim’s growing empathy, and Anthony Michael Hall asserts Jim’s bigotry and complicated self-hate. Every witty remark and piece of blunt wisdom from Kim’s patriarchal father Bill, played by Alan Arkin, is a home run.

Related article: #FREEBRITNEY Movement to Save Britney Spears: Everything We Know

Screenshots of letter from #JohnnyDepp’s ex #Vanessaparadis + Insta post from daughter #LilyRose – defending Johnny in 2016. He was still boycotted by masses.
time to REBOOT DEPP. This is his #metoo survivor moment. #rebootjohnnydepp #cancelamberheard #likeyoucancelledjussie pic.twitter.com/x8QU0XMaNq

Below the surface of Edward Scissorhands

Upon initial release in 1990, many critics and fans alike considered the film a “don’t judge a book by its cover” folktale. While there’s truth in this notion, the more intricate and overlooked subtext of Edward’s story is more thought-provoking.

This story is very personal. When comparing Burton to his beloved character Edward, many parallels can be made. Aside from the pair’s jagged mops of hair and taste for an all-black get-up, they both suffered from social rejection and misperception. So, it comes as no surprise that Burton has credited his youth in the suburbs of Burbank, California, as the inspiration for the story of Edward Scissorhands. In an interview with The Independent, Burton notes his difficulties connecting with others and feeling misunderstood growing up. Additionally, in the Blu-Ray disc’s director’s commentary, Burton discusses how many of the story’s characters represent people from his childhood and adolescence.

An allegory of mental illness

Beyond the intimate nature of the narrative, Burton’s film appears to be an empathetic perspective piece about mental illness in disguise. In particular, many of Edward’s mannerisms and characteristics appear to be reflective of Autism Spectrum Disorder (ASD), a developmental condition with variable severities and symptoms. In the film, Edward displays some of the more commonly recognized symptoms, including his difficulties with socializing, self-isolation, neutral facial expressions, lack of verbalization, overly literal nature, and misunderstanding of sarcasm. Edward is also incredibly focused and talented in a specific area, his creative artwork. Throughout the film, this is seen in his beautiful, detailed, and practically crafted hedges and ice-sculptures. Above all, Edward has feelings and is highly compassionate: something that both society and the townspeople of Burton’s fictional suburb ignorantly fail to understand about those with ASD.

This subtext is further supported through some ingenious symbolization. Most notable is from the second part of the film’s title, the Scissorhands. At a literal level, Edward’s hands are a physical disability. They make everyday activities – like getting dressed, eating dinner, touching his face, and sleeping in waterbeds – an active struggle. At a metaphorical level, they symbolize his inconspicuous awkwardness and inability to connect with others. Edward startles others by merely waving. He cuts himself and others through innocent attempts of communication. In one scene, Kim asks Edward to embrace her, and he hesitates. It becomes apparent that Edward’s hands prohibit him from the purest form of human connection: touch.

Edward’s disconnect and sensory-overloaded perspective of the world are highlighted through the film’s vibrantly colorful aesthetic. With the perfect mix of campiness and heart, the hand-crafted set and costume design pop in a pastel color palette. But Joyce’s neon-pink ambrosia salad comes in stark contrast to Edward’s black leather, metal shell, and gray-scale mansion.

The precise direction of actors and remarkable cinematography from Thomas Ackerman creates plenty of symmetrical frames that are aesthetically pleasing and warrant a pause to gaze upon. The frequent use of wide lenses and shots create a consistent sense of place and distance, emphasizing the separation between Edward and the rest of Burton’s fictional world.

The townspeople look at Edward as more of a specimen than a confused boy, exploiting his natural talents and then shaming his inherent difficulties when he blunders. As another reflection of an ASD struggle, the townspeople automatically label, misperceive, and judge Edward upon his arrival. Jim proclaims, “my old man thinks he’s a retard” while others call him a “cripple” or “disabled”. Nevertheless, no one attempts to understand him first.

Edward Scissorhands may also be an allegory for one of many other developmental disorders and mental illnesses – like ADHD, Social Anxiety Disorder, and Major Depressive Disorder. Stories need to be told from underrepresented perspectives like Edward’s. In many ways, the film is a universal love letter to outsiders and those born different. It’s why this unique take on the monster movie is watched, studied, and beloved by cinemagoers three decades after its release. With plenty to gush over, Edward Scissorhands is an entertaining and compelling film that is essential for all who love cinema.

Tiger Russell-Yeh
Tiger Russell-Yeh is a writer and aspiring filmmaker with a background in psychology and a passion for storytelling and pop culture. He works to actively address unspoken topics, educate, and remove stigmas associated with mental illnesses through his writing. Hollywood Insider is the perfect place for Tiger to combine his motivation to lead positive change with his love for film and television. He’s a firm believer in the power of storytelling to inspire, challenge, and unify audiences. Writing features and reviews, Tiger hopes to spread the joy and perspective that stories give him to others.
[tptn_list]