‘Coven of Sisters’: Freedom for Both Women and Men Must Be Equal – Not Just on Paper, In Life and Safety As Well 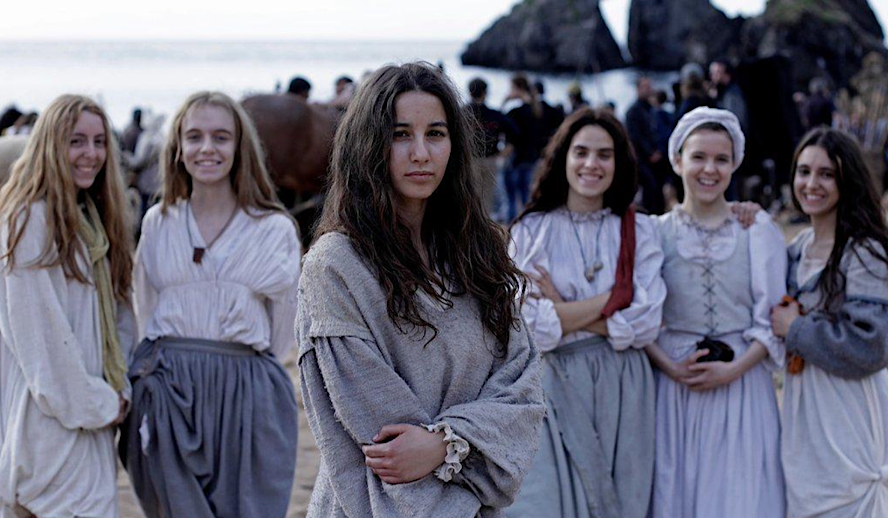 Throughout time, there is a great history of men claiming threats towards them as “witch hunts” and strong women they feel pose a threat to men as “witches”, the root of one of the most infamous attacks on women in history: the Salem Witch Trials. Songs have been written about it, plenty of books, tv shows, articles, and movies have come out about this idea, and the new Netflix film ‘Coven of Sisters’ is one more exploration into this concept.

‘Coven of Sisters’ takes place in Spain in 1609 in a small town in the Basque Country. All of the men of the town are out at sea for the month so a religious inquisitor, on an extensive streak of burning women accused of being witches at the stake, uses this opportunity to come into the town and arrest six girls found dancing and singing in Basque around in the woods and accuse them of being witches. The girls, in an effort to delay their burning at the stake, decide to go along with the lie and let the inquisitor think that they will show him the witch Sabbath ritual at the next full moon.

‘Akelarre’ – The Importance Of Different Cultures

One of the reasons the six girls were accused of being witches in ‘Coven of Sisters’ was because they spoke and sang in a different language than the inquisitor. While the Basque Country is in Spain, their primary language is Basque instead of Spanish. The religious inquisitor only knows Spanish and because of that was immediately suspicious of the women who he thought were speaking tongues instead of Spanish. While this is not usually a reason anymore why someone is accused of being a witch, this lack of cultural understanding is still around today and creating a problem in society.

We live in a society that is fairly self-centered, and, while there are many people who seek out education about different cultures, there are plenty who see different cultures as a threat to their own. Much of the events of the past five years have come about because a lot of individuals saw how different cultures were rising in prominence and declared it a problem. They were afraid of seeing something that was not what they were accustomed to and instead of taking it as a learning opportunity they simply declared it wrong and dangerous and tried to repress its rise. If we were more understanding and open to learning about new and unfamiliar cultures then we could become a more caring, bonded society that values diversity and differences.

‘Coven of Sisters’ – The Importance Of Strong Women

The six girls in ‘Coven of Sisters’ were the target of the religious inquisitor in part because of the lack of men in their town at the time. These women were able to go about their lives as independent women and not have to rely on men for their day-to-day lives; they had a freedom about them that the majority of women did not have then. This of course meant that the man who came across them would see this as threatening to society and want to put a stop to it, hence having the six girls arrested.

The general belief during this time was that women were more “susceptible to sin” and the women who did not conform to what society expected of them were sinners. Again, while not to these extremes today, this philosophy is still put on women today. If a woman does not meet the expectations of what men want then she is looked down on or shunned. Despite women now having more freedoms than women in 1609 and the 1690s, there are still basic aspects of a woman’s life men think they should be allowed to dictate what a woman can and cannot do despite not having any experience with it.

These six girls were seen dancing and singing in the forest alone, just having fun and expressing their joy. Again, their free expression there was seen as a threat, something that was a large reason for many of the accusations during the Salem Witch Trials as well. Women being able to express themselves is even still today seen as threatening because it may include something men do not want to hear which should not matter anymore.

In the United States we have the freedom of speech, freedom which all who are here get to have including women. While this does not mean freedom from consequences, it does mean that everyone gets to express their opinions but still, so many people tell women that their opinions are wrong and do not matter just because it is not what their own opinion is. What is not wrong is that women have every right to express themselves and be strong, free, independent people just the same as a man.

The Importance Of History Not Repeating

If there is any takeaway from this period piece, it is that so much of the ideology that led to the plot of this film is still around today. Officials are still marking certain groups unfairly as dangerous simply because they are different from what they already know. ‘Coven of Sisters’ reminds us that we need to do better at being open to learning about different cultures and growing our worldviews beyond the familiar. It reminds us that women are still being hunted down in parts of the world for expressing themselves and being persecuted for doing so.

Even here in the United States women are ganged up on when they express themselves or present something new and different. This film reminds us that our culture still needs to evolve to the point where the standards of shared freedoms between men and women are actually the same in practice and not just on paper. While the term “witch” is not necessarily used today for women who deviate from societal expectations, we need to stop treating women who do not follow the same path as being a bad thing.