A Tribute to Carl Sagan: The Wonderful Mystic, Where Brains Meet Entertainment 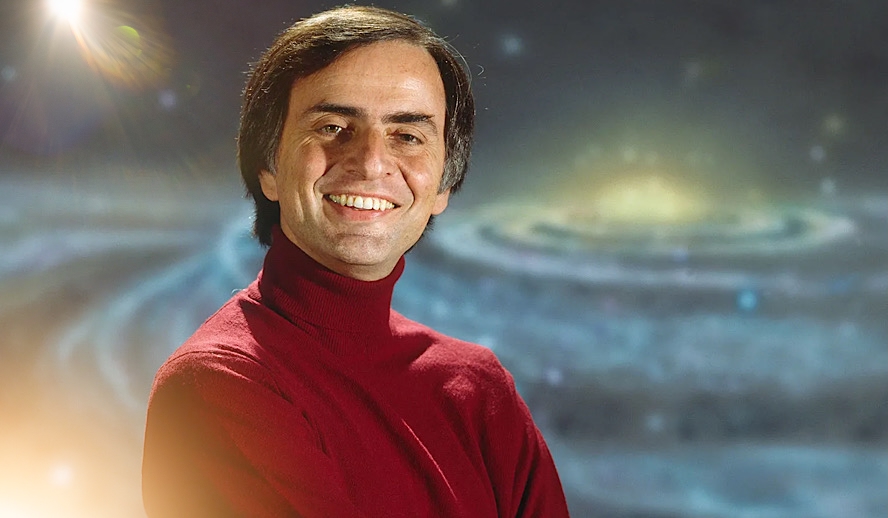 A lyrical wordsmith and a person who was able to make even the most difficult scientific notions easily digestible, Carl Sagan was a one of a kind, and a great influence on science and entertainment. No one else has been able to master the crossroad between art and science so wonderfully balanced with educational benefits within an alluring, nurturing, aesthetically pleasing entertainment package. From his countless books that weave between literature and educational science books, and his hit TV show, ‘Cosmos: A Personal Voyage’, that’s actively being made with updated information starring Neil Degrasse Tyson, and now titled ‘Cosmos: A Spacetime Odyssey’, Carl Sagan brought the most complex scientific notions into the mainstream by condensing them into fitting layman’s terms, a skillset that hadn’t been seen before by the general public until him.

Sagan wasn’t just a phenomenal scientist, but an intricately beautiful artist. No one has shown such mutual right-brain left-brain dominance since or before him. There have only been a few people that were able to stand upon his shoulders; namely, Bill Nye and Neil Degrasse Tyson. His brilliant mind materialized his most unearthly fascinations throughout his lifetime that pushed human inventions into interstellar space, and put the imprint of the human species in the cosmic ocean. His contributions to not only science and art, but to the advancement of the human species and the search for extraterrestrial life deserve persistent commemoration, appreciation of the highest level, and a glowing permanent position in human history.

The Life and Career of Carl Sagan

Born in 1934 in Brooklyn, New York, Carl Sagan famously was interested in the cosmos at an early age. Zipping through space books, sci-fi novels, and even drawing his impeccable visions of the future, Sagan impressed everyone around him, and it was clear he was one of a kind and destined to do amazing things. His imagination would balloon after seeing the innovations of some of the brightest minds and creating the most brilliantly bizarre inventions at the New York World’s Fair.

Many times, he’s publicly spoken about the impact the New York World’s Fair had on him, where he saw an even match for his imagination and realized the real-life possibilities of making a career out of what he loved. Fascinated by stories and reports about space, planets, and extraterrestrial life, Sagan’s curiosity and intelligence earned him his high school diploma at the young age of 16. He then went on to the University of Chicago, where he graduated with a B.A. in physics at age 21, followed by his master’s at age 25, then a Ph.D. in astronomy and physics before his 30th birthday.

On the other side of the United States, the University of California, Berkeley, made Carl Sagan a fellow in astronomy. He would finally be able to put the amount of knowledge that many take a lifetime to accumulate but he did in thirty years, into practice, and worked on NASA’s Mariner 2 Robotic probe. As respect for him was gained, more and more in scientific communities, he found himself at the prestigious Harvard University and the legendary Smithsonian Astrophysical Observatory. Sagan devoted most of his time there to study the planets in our solar system, specifically Venus and Jupiter, and their physical conditions.

It wasn’t long until Carl Sagan became the director of Cornell University’s Laboratory for Planetary Studies, and became a professor just a few years later. Now decades deep in the field, Sagan was helping NASA with some of their most innovative work that would be largely influential even in the modern-day. However, his celebrity status exploded as he became more outspoken about his beliefs regarding interstellar space travel, planets, the cosmos, and extraterrestrial life. He was even a brief consultant on Stanley Kubrick‘s masterpiece ‘2001: A Space Odyssey’. But he delved deep into writing, some educational, some straight-up science fiction novels, living out his imaginative fascinations from his childhood and bringing them to life as an adult.

Carl Sagan’s ‘Cosmos: A Personal Voyage’ Made Science Entertaining and Interesting to the Public Like Never Before

In 1973, Sagan released his book ‘The Cosmic Connection: An Extraterrestrial Perspective’. This started to gain him international attention not just as a scientist anymore, but as a talented writer with incredible stories and notions. He also demonstrated the novel ability to condense complex ideas into charming and alluring prose, culminating in comprehendible stories that deliver powerful information in a way general audiences enjoy. Sagan went on a creative spree throughout the 70s, writing ‘Other Worlds’ in 1975, and ‘The Dragons of Eden: Speculations on the Evolution of Human Intelligence’ in 1977, which won a Pulitzer Prize. Sagan didn’t release another novel until 1985, titled ‘Contact’, which was later adapted into a movie twelve years later with Jodie Foster. However, arguably his most influential work came out five years prior.

Carl Sagan and Ann Druyan would change the world and how regular everyday people understand science with their groundbreaking show, ‘Cosmos: A Personal Voyage’ in 1980. That same year, he founded an international space exploration non-profit organization, the Planetary Society. Taking such a complex, small field that only the best and brightest understood and could get involved in, then expanding it to the world, making the grandest scientific notions comprehendible was one of Sagan’s most fascinating distinctions, and established him as one of the very first scientist celebrities. His notoriety was not the only factor in his celebrity status either, it was the phenomenal crafting of his own hit show, along with Ann Druyan, and manufacturing it in an entertaining package that matched, and at times, surpassed some of the best sci-fi shows and movies in terms of production quality, dialogue-heavy with lyrical prose, and with great societal benefit.

In 2014, Ann Druyan and Seth Macfarlane, a well-known brilliant space and science fanatic, executive produced a revival of Carl Sagan’s original ‘Cosmos: A Personal Voyage’ with a new, farther-reaching title, ‘Cosmos: A Spacetime Odyssey’, with Sagan’s underling and equally talented scientist and entertainer Neil Degrasse Tyson as the host. The show has been met with incredible commercial and critical acclaim, but many fans of the show believe it deserves much more for its greater contributions to art, science, and society.

The show expertly carries on the legacy Carl Sagan and Ann Druyan left with the original show, and shows off its advanced technological possibilities with replicating and re-creating stories revolved around the greatest people in history and their contributions to science. Macfarlane’s influence is clear on the show, with the animation and production quality being top tier and rather avant-garde in many episodes. It’s certainly worth a watch for anyone and will keep you glued to the screen and fascinated beyond belief.