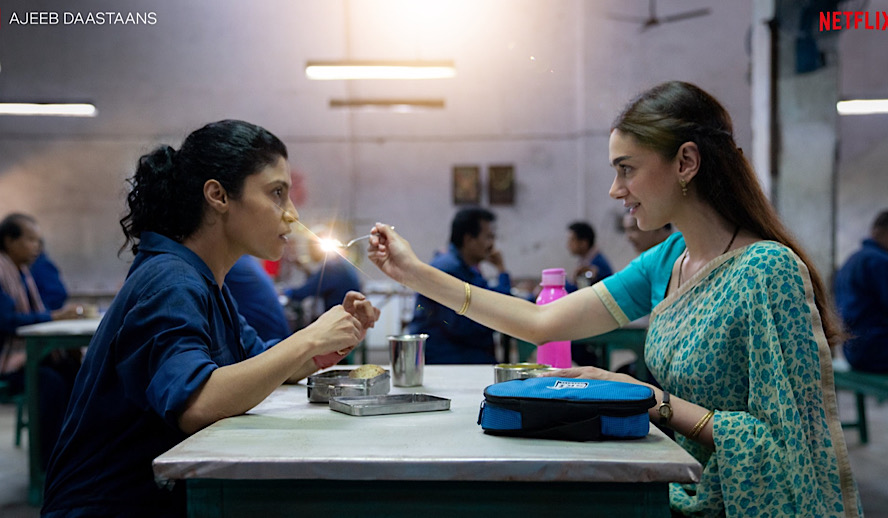 A new collaboration by Netflix and leading Indian film industry director/producer, Karan Johar, ‘Ajeeb Dastaans’, literally translating to “Strange Tales”, presents four short stories of love in a distorted and tethered world. The short films, running a little over 30 minutes each, are directed and written by separate teams and follow the unrelated lives of those impacted by classism, disabilities, sexual harassment, and bigotry. Though one’s first instinct is to assume that this film is another one of Johar’s attempts at romanticizing romance itself, through his controversial tendencies to glamorize stalking, harassment, and obsessive lovers, ‘Ajeeb Dastaans’ argues that love isn’t always easy and usually isn’t the solution.

‘Ajeeb Dastaans’ and the Tales within it:

The first tale starts off with Babloo (Jaideep Ahlawat), a wealthy small-town businessman, telling his newly-wed wife Lipakshi (Fatima Sana Shaikh) that their marriage is simply a business arrangement between their parents, as he is in love with someone else. Lipakshi, feisty and assertive by nature, refuses to accept the double standard society has placed by spending the next few years of her dead-end marriage by flirting with the men of the town and engaging in multiple extra-marital affairs. When the family driver’s highly educated son Raj (Armaan Ralhan) begins working for Babloo as a personal financial advisor, he also takes a liking towards Lipakshi and the two engage in a secret affair.

The film addresses the strange disunion between toxic masculinity and homosexuality, particularly in conservative and traditional communities. Babloo eventually confesses his love for Raj and admits that his father had forced him to marry Lipakshi upon finding out his sexuality. However, to protect the family’s honor, he cannot leave her nor can he tolerate her being intimate with another man. Babloo, despite breaking the stereotype of a typical queer man, cannot let go of his possessiveness over his wife – what he deems as his “property”.

He injures or kills every man she is involved with and even threatens to kill her multiple times, failing to see the loneliness and longing in her eyes. Raj, caught in a crossfire between the husband and wife, ends up betraying both, seemingly having faked his entire relationship with Lipakshi for ulterior motives. The film ends beautifully when we see a split second of understanding between Babloo and Lipakshi as they both sit broken-hearted over the same man.

Director Shashank Khaitan almost turns this romantic tragedy into a thriller full of plot twists and turns. The viewer may think they know how the story will unfold, but is left guessing till the very last minute, even with the many clues placed throughout. As the first of the four films we see, ‘Majnu’ sets a tone for the remaining three and blatantly tells the viewer to not even bother speculating the ending for any of the coming shorts.

In what was perhaps the most disturbing of the four films, ‘Khilauna’ sees a poor house-maid Meenal (Nushrat Bharucha) struggling to make ends meet and support her little sister Binny (Inayat Verma). She takes on a job in the home of the neighborhood secretary Vinod Agarwal (Maneesh Verma), whose wife needs extra help in her pregnancy, in hopes of convincing him to bring electricity back into her home. Vinod frequently sexualizes Meenal and even attempts to sexually assault her with the promise of helping her.

The film places subtle clues all throughout its duration with a focus on one seemingly insignificant character, Binny. The nine-year-old accompanies her sister to work, visits to their community laundryman and friend Sushil (Abhishek Banerjee), and even witnesses Vinod’s attempted assault. In each incident, we always see her reaction as an observer and bystander as she takes it all in, never saying a word. However, her forged childlike innocence eventually comes with a consequence when the viewer, along with the characters, discovers that she violently kills the Agarwals’ newborn baby by placing it in a boiling pressure cooker, alluding to an earlier scene where she innocently handles a pressure cooker to help with kitchen chores.

Directed by Raj Mehta, ‘Khilauna’ acts as a stirring mystery keeping the viewer on the edge of their seat, as scenes flicker between the present-day police investigation and the past context around the incident. While Bharucha’s character is shown to be a thick-skinned cynic throughout the background story, we see a vulnerable and fearful side of her in front of the police. In contrast, the primary antagonist, Vinod, is not shown at all after the scene of the murder, and the audience is left wondering if he too showed a softer, more emotional side to him following the death of his child.

‘Geeli Pucchi’ follows the story of Bharti Mandal (Konkona Sen Sharma), a well-educated factory worker from a low caste trying to get promoted to a higher position. Her dream opportunity is given to less qualified but higher caste Priya Sharma (Aditi Rao Hydari), who befriends Bharti and bonds over being the only other woman in the factory. The two become closer and share a romantic, intimate moment, much to the confusion of Priya, who is married to an affectionate and dedicated husband.

In contrast to ‘Majnu’, the only other film addressing the struggles of the queer community in rural India, Director Neeraj Ghaywan’s ‘Geeli Pucchi’ shows the inevitable collide when two individuals are given a choice to accept their truth. Though Bharti is already comfortable accepting her sexuality, Priya is more conservative and struggles with her feelings. Bharti does not try to convince Priya to acknowledge her sexuality, as one would expect, when she realizes that she will never be accepted for being from a lower caste. This allows her to use Priya’s naivety and inexperience to her advantage by convincing her to get pregnant as the solution to her internal conflict. While Priya is on maternity leave, Bharti handles her responsibilities as a favor. She then convinces Priya’s family that it is too soon for her to return to the work, resulting in her quitting and Bharti finally getting the position she sought.

On top of bringing to light the subtlety of the caste divide still present in modern-day India as well as the stigma surrounding the LGBTQ community, this film reveals the manipulation often entangled within love. Priya’s blind trust in Bharti as she held her hand through the process of conception, pregnancy, and newfound motherhood ended in her own detriment. Similarly, Bharti’s bitterness at being discriminated against for her caste, even in her closest relationships, affected not only her decisions but also inclined her to take advantage of opportunities no matter the relationship at stake.

We must mention that the producer of ‘Ajeeb Dastaans’, Karan Johar, is one of India’s most excellent film directors. Johar has been one of the most outspoken activists speaking up for LGBTQ rights and is commended as one of the reasons for progressive LGBTQ cultural acceptance and legalization in India. India’s LGBTQ community has Karan Johar to thank as he has beautifully utilized Cinema to bring LGBTQ acceptance into minds, hearts, and homes.

The final film takes place in a vastly different setting than the ones prior, following the lives of an upper-middle-class family in the city of Mumbai. Dedicated mother Natasha (Shefali Shah) grapples with a strained relationship with her husband Rohan (Tota Roy Chowdhury), who is an emotionally distant father to their near-deaf daughter Samaira (Sara Arjun). As Rohan works long hours and refuses to find the time to learn sign language, Natasha meets deaf photographer Kabir (Manav Kaul) and is immediately impressed by his carefree yet depth-filled personality. The two spend more and more time together, communicating solely in sign language, resulting in Kabir confessing his love as soon as Natasha sees hope for her family’s future.

The beauty of this film, directed by Kayoze Irani, lies in the quiet moments between Kabir and Natasha as we see their bond grow without speaking a word. With immaculate expressions and body language, Shah and Kaul manage to convince the viewers to fall in love without making a single sound. ‘Ankahi’ does more than just bring awareness to the topic of modern-day disability – it argues that everyone deserves to be loved. By painting a picture of love and heartbreak within a community that isn’t often represented in Cinema, Irani is able to make the story emotional yet simple to any viewer.

Indian Cinema is not new to anthologies, with ‘Lust Stories’ and ‘Ghost Stories’ having paved the way for ‘Ajeeb Dastaans’ to the mainstream. It may take an open mind and a creative eye to appreciate these four short films, full of weird and twisted depictions of love and rarely resulting in the typically romanticized happy ending. However, the film represents a step forward for the industry, away from cheesy, half-baked romances and towards real stories and dynamic characters.

Riddhi Chopra
Riddhi Chopra is a writer for Hollywood Insider, passionate about delivering meaningful stories to a wide range of audiences. She is skilled at bringing together a diverse set of perspectives into her work to present innovative, transformative, and high-quality content. With interests in film, television, and other media, she aspires towards an influential and progressive global entertainment/media culture, similar to that at Hollywood Insider.
[tptn_list]