Must Watch – ‘Super Deluxe’: An Oscar-Worthy Foreign Film With A Powerful Message 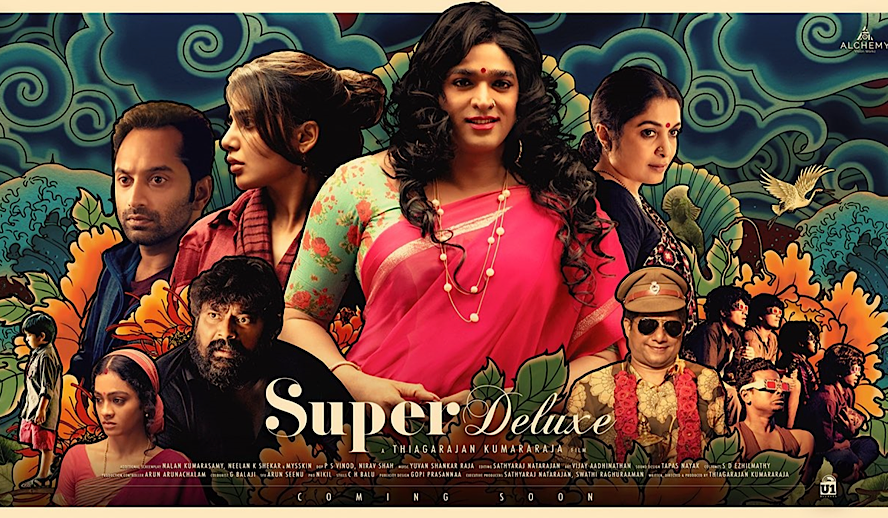 This film was reviewed by two different writers to give a well-rounded commentary on the film.

Super Deluxe is available to stream on Netflix. Our advice is to watch it without viewing the trailer first.

I am certainly not qualified to accurately compare Super Deluxe to the culture it embodies, but what I can do is recognize an artist when I see one.

That artist is Thiagarajan Kumararaja.

Thiagarajan Kumararaja’s Super Deluxe is a film that seeks to transcend description and nearly succeeds. Part comedy, part drama, part thriller and part philosophical meditation, the film is many things. Super Deluxe is by no means perfect (what movie is?) but what it lacks in pacing or story, it makes up for with brilliant tone shifts, cinematography, cast, and direction. Both tonally and narrative-ly, there is a lot happening in Super Deluxe, and at times the film risks becoming nonsensical. Fortunately, the film has strong actors, interesting ideas and a well-done conclusion to help it stay firmly afloat.

Super Deluxe Has A Lot To Handle

While Super Deluxe certainly feels like a 3-hour movie, it’s run time is justified. There are four stories that all reach their climax during a fateful day while spilling into each other. It truly is a lot to handle and the slightest detail becomes important at some point down the road.

Honestly, I tend to multitask with everything I do. I looked away from my screen when getting some other work down for literally less than 20 seconds and I was lost. A lot, and I mean a lot, goes down between the four subplots while the film as a whole has large philosophical themes of truth and society woven throughout, vying for your attention. From the smallest aspects to the biggest of twists, it is worth the time.

You Know An Artist When You See One

I have much praise as well as some serious critiques of Super Deluxe. But, no matter what opinions you or have regarding this film, you should not…let me rephrase that: you cannot deny the clear direction and overall artistry of Thiagarajan Kumararaja. An original visionary unabashedly willing to take chances, he takes cues from other filmmakers of years past (think Quentin Tarantino, Guy Ritchie, and even some Hitchcock).

Those are the ingredients necessary to be an auteur.

And guess what? This is just Kumararaja’s second feature film. Now there’s a natural. He’s young with much ahead of him and this won’t even be his best film. I know it. In a film or two, Kumararaja’s masterpiece will be here, and the world won’t be able to deny him then.

I don’t want to spoil the film, but the uses of cinematography, black humor, and out-of-left-field twists are brilliant and don’t betray the overall theme and atmosphere that the director crafts together. It is his story he tells and his alone.

Due to its nature as an Indian Tamil-language film, Super Deluxe must be watched with subtitles by anyone who doesn’t speak Tamil – and you will be glad you watched. It is a treasure and a profoundly moving film and exactly fits the quote made by Oscar-winning Parasite’s director Bong Joon-Ho when he advised us all to “overcome the one-inch-tall barrier of subtitles, you will be introduced to so many more amazing films.”

Thankfully, this film’s subtitles on Netflix are incredibly well-done, even following background conversations and television stations so that every viewer can get the full experience. Pop-culture references (which are plentiful) and characters’ inflections when speaking are all preserved through text.

Another miracle is how each and every character in the film has their own arc in some way or another that pays off, which shouldn’t work. The cast is excellent though Ashwanth Ashokkumar as the 7-year-old Raskutty is a revelation (seriously, a kid shouldn’t have that much talent) and Bagavathi Perumal as the purely evil officer, Berlin, is fantastic as such.

Super Deluxe gives to us a powerful message

Super Deluxe is made up of four different storylines which intersect at various points in the movie. One storyline tells about Vaembu, played by Samantha Akkineni, and Mugil, played by Fahadh Faasil, a married couple who find themselves in the middle of covering up a crime. Another storyline involves a group of five young boys who desperately search for a way to make money. Another thread focuses on one of the boys’ parents, his mother Leela having a surprising past and his father Arputham a deeply religious preacher. The final piece of the story is focused on a young boy named Rasukutty, who is awaiting the return of his father.

Despite the often-disparate tones amongst the four plots, Super Deluxe manages to reach a satisfying conclusion, which is surprising given the large number of moving pieces in this story. The plots are firmly tied together through key events, and an extensive ending monologue addresses the film’s various themes.

That said, the ending scene bluntly states the film’s message and unique ideas regarding life and the universe as a whole which helped nail everything that Kumararaja wanted to get across in case you did miss something. Even the film’s structure is referenced, as the narrator explains, “With so many billions living on earth, lives are bound to crisscross. One’s action is bound to affect another.” He wants to make sure you leave the theater with questions and are impacted internally, while clearly making many critiques of the state of India.

But you’re better off just watching the whole thing intently.

The plethora of storylines

Super Deluxe is difficult to place into any one genre, due to using a wide range of different tones and styles. Vaembu and Mugil’s story plays out like an action thriller, with heavy doses of comedy throughout. Meanwhile, the scenes with the group of young boys are heavily comedic, often coming across as Kumuraraja’s version of Superbad.

Leela and Arputham’s stories, meanwhile, are often deeply emotional and philosophical. The story of Rasukutty and his father is humorous as well, but also incredibly dramatic and at times tragic. It tugs at your heart strings with full gusto.

Related article: Brad Pitt is Trending: Why I Am Ecstatic for All the Love Oscar-SAG-BAFTA-Golden Globe Winner Brad Pitt is Receiving

Outside of the film’s interesting multi-layered plot, there are also several other aspects of the movie that make it stand out. The cinematography is very appealing, with a heavy use of locked-down long-takes to immerse audiences in the scene. Rather than using multiple fast cuts to create a feeling of intensity or drama, the camera often stays in one place for what feels like minutes – which clearly shows the director’s confidence in his actors, storyline and staging.

This allows the actors to truly own each scene, and the audience to feel at home in the scene. The exceptionally talented cinematographers P. S. Vinod and Nirav Shah have given the film an aesthetic quality that further adds to the brilliance of the film.

The Oscar Debate regarding Super Deluxe

Yes,‌ I personally don’t think that films should be weighted based on Oscars in any way shape or form. Awards are pieces of metal. But I understand that many believed Super Deluxe should have been India’s submission for the Best International Feature Film Award. India probably should have chosen Super Deluxe as its official entry. Kumararaja has a great future and I do think he has the goods to break through into the Oscars at some point.

Again, film is art and art is subjective. Hence a single film being crowned the “Best Picture” is really just nonsensical. Not absolute. I personally don’t think that films should be weighted based on Oscar’s in any way shape or form. Awards are pieces of metal.

Despite some flaws, Super Deluxe is a masterfully put together web of storylines. Each plot is unique and interesting in its own way, so the audience is never bored. With expert acting, beautiful cinematography and a non-stop story, Super Deluxe transcends language barriers and is enjoyable by all audiences.

I do think eventually, thanks to Parasite, that more international films will have a greater chance at big awards. Don’t worry, Kumararaja will have his say outside of his own country. In fact, he already is. And it’s just a matter of time before the industry, both his own and foreign, is forced to recognize it. Super Deluxe is a treasure. Available to stream on Netflix. Our advice is to not watch the trailer first.

By Thomas McNulty and Merrick Sinclair