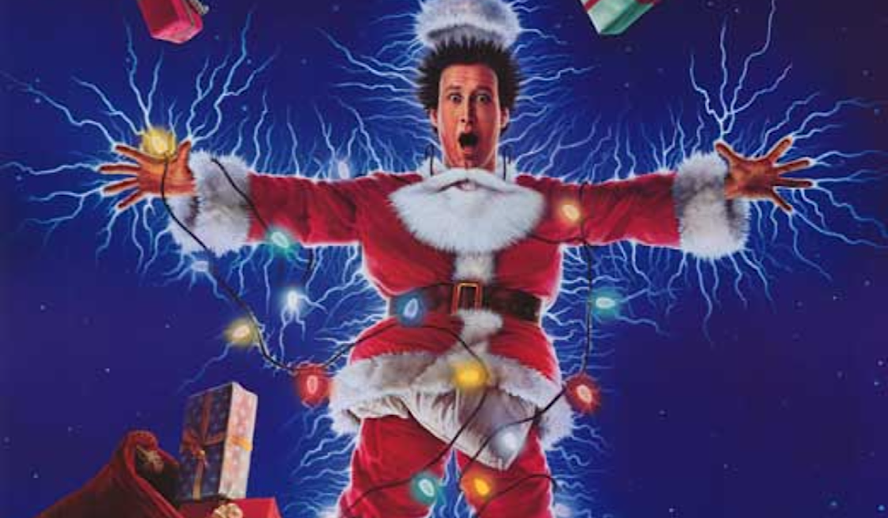 What do you think of when you think of the holidays? Putting up string lights? Sledding down snow-covered hills? Angry squirrels jumping out of the newly chopped Christmas tree? Yeah, the last one is definitely an outlier but is just a normal occurrence for the Griswold family. Written by John Hughes and directed by Jeremiah S. Chechik, ‘National Lampoon’s Christmas Vacation’ has become a holiday tradition in many households since its release in 1989. ‘National Lampoon’s Christmas Vacation’ has remained such a classic film thanks to its relatability. The film is so successful thanks to how it finds humor in the mundane aspects of Christmas that everyone finds relatable while also acting as a commentary on the typical struggles of the holiday season. In doing this, John Hughes and Jeremiah S. Chechik created a Christmas classic while setting a new standard for the holiday film.

The film tells the story of Clark (Chevy Chase) and Ellen (Beverly D’Angelo) Griswold as they try to plan the perfect Christmas for their family while dealing with visiting family members. This batch of family members includes the judgemental mother-in-law (Doris Roberts), the senile aunt (Mae Questel), and good old Cousin Eddie (Randy Quaid). During all this commotion, Clark patiently waits for a Christmas bonus at his demanding office job while Ellen tries her best to keep the peace among all the in-laws. Part of the fun of ‘National Lampoon’s Christmas Vacation’ is how the film finds humor in the mundane parts of life that we all deal with.

The most memorable scenes of the film focus on taking a relatable aspect of the holidays and turning it upside down. The film takes recognizable holiday traditions and completely turns them on its head, messing with the audience’s expectations. In one memorable scene of the film, the family gathers around for Christmas Eve dinner where every tradition is turned on its head. Instead of saying the blessing, senile Aunt Bethany says the Pledge of Allegiance and instead of the family correcting her as one would expect, they all join in with Cousin Eddie even standing like a true patriot. The film then messes with the tradition of the Christmas dinner. As Clark goes to cut the turkey that Cousin Catherine (Miriam Flynn) made, he comments, “If this turkey tastes half as good as it looks, then I think we’re all in for a very big treat”. Upon cutting it though, the turkey practically disintegrates into a pile of bones and smoke. Instead of having a nice dinner like a Norman Rockwell painting, the family is instead left eating a Turkey that still has the heart in it.

One of the most memorable aspects of all the ‘National Lampoon Vacation’ films is Clark’s unhinged rage. While Clark is well-meaning in all his endeavors, life tends to have other plans for him. After relying on a Christmas bonus for a new swimming pool, Clark soon discovers that his boss got rid of all the Christmas bonuses and replaced them with a membership to the “Jelly of the Month Club” (a gift that keeps on giving). This soon causes Clark to snap, not only going on a tirade but causing Uncle Eddie to kidnap Clark’s boss (Brian Doyle Murray) which results in a SWAT team busting in.

Clark’s unhinged rage is the perfect antithesis of what one expects of a wholesome family Christmas. The weight of all the holiday stress gets to be too much for Clark, what is meant to be good cheer and memories only sets off Clark since none of it lives up to his high expectations. Not only does Clark’s rage mess with the audience’s expectations of the holly jolly spirit but it also acts as a commentary on what the high expectations of the holiday season can do to a person.

The Weight of Financial Holiday Stress

While finding humor in the mundane traditions, ‘National Lampoon’s Christmas Vacation’ exposes the holiday stress that we all go through. The film specifically exposes the financial woes that one faces due to the expectations of Christmas, from family activities to Christmas presents. As previously mentioned, the film focuses on Clark’s desire of receiving a Christmas bonus. This bonus, in Clark’s mind, will improve his life and make all the craziness of Christmas worth it. Once Clark doesn’t receive this bonus, he snaps, letting the weight of the holidays overtake him. With Clark’s outbursts, we see how holiday stress has pushed him over the edge, making him a Grinch-like monster.

Cousin Eddie, on the other hand, is not as well off as Clark. While Clark has financial problems, he is still middle class but Cousin Eddie is lower class. Eddie has lost his job, lost his house, and is currently living in an RV. Cousin Eddie’s stress is much bigger than Clark’s stress of affording a pool. Eddie can’t afford a home for his family or even presents for his children. While the film exposes the financial stress that comes with the lower class around the holidays, it is important to point out that Cousin Eddie and his “redneck ways” are also the butt of many jokes in this film. It is also important to point out that Cousin Eddie is often portrayed as a “free-loader”. Take this scene for example, where Clark offers to buy Eddie’s children Christmas presents from Santa. The scene plays for laughs, portraying Eddie almost as a scam artist who has been waiting for this offer, giving Clark a prepared shopping list and everything.

‘National Lampoon’s Christmas Vacation’ is a dysfunctional and unconventional portrayal of the American holiday season. The film takes the holiday traditions that we have become accustomed to and turns them on their head, warping them into something that the audience doesn’t expect. By doing this, the film also exposes the stress that comes with the high standards of the holiday season, specifically focussing on the financial stress that the season causes. By focusing on these aspects of the holiday season, the film ultimately becomes a hilarious and relatable Christmas tale that can appeal to anyone who has celebrated the holiday before. So, next time you’re looking for a holiday film that doesn’t portray everything as holly and jolly, check out the Chevy Chase classic.