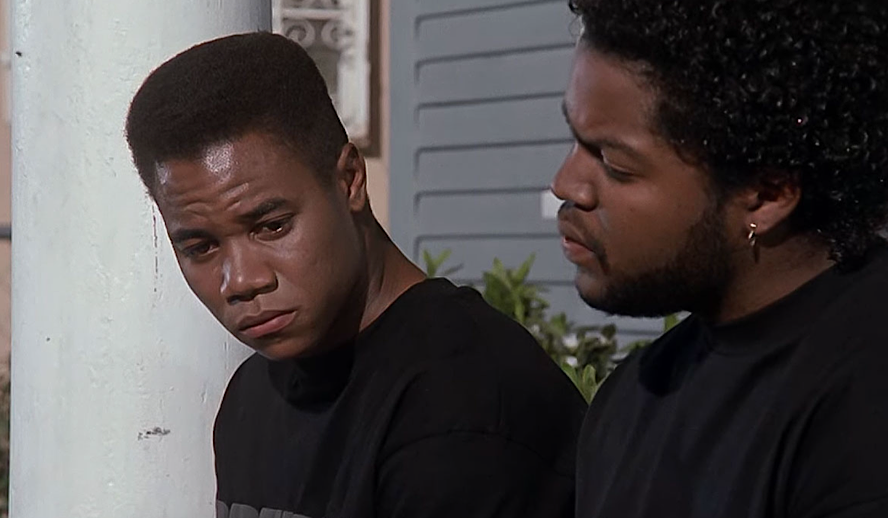 Boyz n the Hood came out three decades ago, but it’s just as relevant today as it was back then. The film is a sobering account of life in low-income neighborhoods, full of gang violence and police brutality. Its honesty is what makes it so masterful. There’s no sugarcoating or sanitizing the grim reality of civilians having to constantly look over their shoulder, wondering if they’ll get shot that day. The most remarkable part of the story is how different the young men turn out when they have responsible adults to look up to, compared to the ones who don’t. They live in the same neighborhood, but their home lives are entirely different worlds.

With the film leaving Netflix at the end of November, I highly recommend revisiting it before it’s taken down from the site. If you are an unfortunate soul who still hasn’t seen it, then please find a spare two hours and sit down with it. This is one of the few films that I can say is truly flawless. The performances, cinematography, dialogue, and pacing are all perfect. I never fully realized how well-paced it was until recently. The progression of the story from seeing the main characters as kids to mild-mannered young men and women joking around and hanging out was done so naturally, to the point where it was almost soothing. While the film was about heavy topics like violence and generational poverty, it had plenty of relaxing “hangout” scenes as well. The best serious movies always have some fun and amusing moments.

New York Times columnist Touré pointed out that “‘Boyz’ coincided with recent news events that enraged many black Americans. It was released a few months after videos emerged of Los Angeles Police Department officers beating Rodney King…” Fast-forward to now, and you’ll recall that an ever-growing number of innocent African-Americans being murdered by police caused protests across the world this year, even amidst a global pandemic. Nothing has changed since the days of Rodney King, and people are tired of it. The film could have come out after the Jacob Blake shooting, and it would’ve been just as appropriate, save for the ‘90s lingo and outfits.

You might say that the protests were related to police brutality and not gang violence, which was arguably the bigger theme in the movie. After all, there was only one scene with a policeman aggressively abusing his power. If that’s the case, then what does the film’s subject matter have to do with the protests? The reality is that the protests weren’t just about police brutality, but about institutional racism and inequality at large. As Furious Styles (Laurence Fishburne) explained in the film, people in the “hood” are set up to fail. Countless liquor stores, gun shops, and the government funneling drugs into these neighborhoods are what cause never-ending violence and darkness in the first place. By showing what these people have to go through as a result of this, the film is a protest in itself. It’s protesting the system that allowed for there to be “hoods” in the first place, areas designed to marginalize people of color.

The power of father figures

Let’s take a moment to give Fishburne his flowers. His portrayal of Furious was everything from smooth and humorous to morally sound. He was an excellent father figure to Tre (Cuba Gooding Jr.), setting an example that not many other kids in that environment had. He was stern without being physical and knew how to command respect in a peaceful way. This is probably one of the most likable characters that I’ve ever seen. His even-keeled demeanor was like water putting out the flames of the more fiery characters such as Doughboy (Ice Cube). One personality evened out with the other.

His effect on his son was obvious, as Tre ended up at Morehouse College. More powerfully, though, Tre chose to get out of the car when Doughboy and the crew were on their way to avenge Ricky’s (Morris Chestnut) murder. Even though Tre was angry and hurt by his friend’s death, his father taught him better than to solve problems with violence. While it was nice to see Tre follow in his father’s footsteps of maturity, it was also tragic to see the result of Doughboy not having anybody to teach him how to be a man. It’s an all-too-real concept: parents have the power to establish either generational excellence or trauma.

The script was a perfect balancing act, with each main character being almost exact opposites of each other. For example, Doughboy was much different from his brother Ricky. Ricky was guided by his love for football and desire to go to USC on a scholarship, while Doughboy was a troubled kid with no productive hobbies or interests. Furious was different from Tre’s mother Reva (Angela Bassett) in the way he raised his child. Reva was a bit more attached, not wanting Tre to leave the parental nest. Furious, on the other hand, wanted Tre to go out and experience the world as long as he was being safe and responsible.

Tre was in the middle, a combination of his dad’s calm and educated nature, with a bit of Doughboy’s aggressiveness. This film truly covered all the bases. There were no one-dimensional characters. Even Doughboy, a drug-dealing ex-convict, was a layered person. This was shown in his ending monologue when he denounced the media for not showing or caring about what was happening in the “hood,” and also admitted to having second thoughts about his lifestyle. It’s easy for someone to get caught up in that negative environment when it’s all that they know and grew up with. The key is to slowly eradicate institutional racism, and stop the vicious cycle that has been plaguing communities of color for far too long. Hopefully one day, people can look back on this movie without it reminding them so much of the current times.