‘Top Gun: Maverick’: A Sequel That Soars to Heights Far Above its Predecessor | A Must-Watch 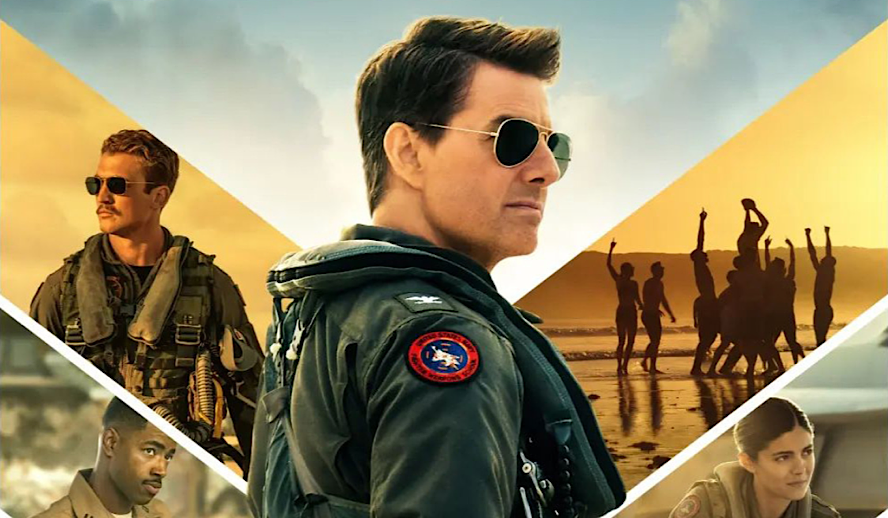 The grand premiere of ‘Top Gun: Maverick’ at Cannes Film Festival 2022, a surprise Palme d’Or for Tom Cruise, and Cruise walking Katherine, Duchess of Cambridge, up the steps at the London premiere – this film deserves all the accolades and more. A sequel 36 years in waiting, successfully surpasses the first one on many levels – and its entertaining for sure. And more.

We live in an era where numerous sequels and remakes of popular Hollywood films reek as desperate cash grabs by major movie studios.  These sequels and remakes usually consist of the same ingredients which include cheap callbacks to the original film that typically induce nothing more than an eye roll, a retelling of the same story,  as well as an overall lack of anything for the audience to become even remotely attached to on an emotional level.  ‘Top Gun: Maverick’ is the polar opposite of these types of films.

Paramount Pictures’ long-awaited sequel to 1986’s classic action/adventure flick, Top Gun, has seen its fair share of release delays for a variety of reasons, the COVID-19 pandemic being the primary one.  However, the film is finally set for official release next week on May 27, and to reiterate what has already been said from those who’ve attended early screenings of the movie, it is indeed much better than the original.

‘Top Gun: Maverick’ is an action/adventure drama sequel to Tony Scott’s Top Gun.  This film is directed by Joseph Kosinski and sees Tom Cruise reprise his role as Pete “Maverick” Mitchell, a TOP GUN graduate who returns to the school to teach a team of young fighter pilots in preparation for a mission more dangerous than even he has ever encountered.  The film also stars Miles Teller as Lt. Bradley Bradshaw, the son of Maverick’s late friend who was killed in the previous film in a training accident.  Jon Hamm plays Vice Admiral Beau “Cyclone” Simpson, someone skeptical of Maverick’s return.  Jennifer Connelly’s role in the film is that of Maverick’s old flame named Penny Benjamin.  Also appearing in the film, albeit briefly due to his current condition, is Val Kilmer reprising his role as Tom “Iceman” Kazansky.  The film has been fully screened at CinemaCon as well as at a number of other press screenings.  It currently holds a 97% critic rating on Rotten Tomatoes and deservedly so.

Kosinski not only directs what may possibly be the best Tom Cruise movie to date, but also manages to bring out arguably the single greatest performance ever seen of the Hollywood megastar.  Cruise made the audience believe in Maverick as a real person in the original film.  The viewer was able to easily buy into this character as a full-of-himself narcissist that was a potential liability for the school and especially his fellow pilots.  In this film, however, the character has evolved.  While his daredevil-like tendencies are still with him, Maverick has naturally matured into understanding why this type of attitude is just what a pilot needs and attempts to explain this practice to his students.  Cruise fuses each of these elements into the character while still maintaining the believability aspect that made Maverick such a likable character in the first film.

As mentioned earlier, Val Kilmer also returns in the film.  Without going into spoilers, what Kilmer was able to do in this film with his medical condition gave us probably the most moving performance in any film this year so far.  If anything, his ailments only added more weight and emotion to his performance.  Jon Hamm and Jennifer Connelly were fantastic in their respective roles as well.  The performances of Glenn Powell, Monica Barbaro, Danny Ramirez, and Lewis Pullman as the various students were also fun to watch.  The banter and chemistry between these pilots were heartwarming and made us invested in their bond as a class and more importantly, as a team about to go on a life-threatening mission where some of them might not come back.

But perhaps the standout performance in the film was Miles Teller.  Teller’s career has been somewhat of a roller coaster.  He first entered the mainstream acting scene with a role in the less than beloved ‘Divergent’ film series, achieved breakout status with 2014’s ‘Whiplash’, found himself bungled in the middle of the fiasco that was 2015’s failed ‘Fantastic Four’ reboot, saw mild success in Todd Phillips’ ‘War Dogs’, and hasn’t garnered much mainstream status since.  In this film, Teller’s acting chops are firmly illustrated to the audience, despite sharing the spotlight with Cruise.  Teller brilliantly brings to life the emotion that engulfs Bradshaw’s character, primarily through the resentment he feels towards Maverick for his father’s death in the first film.

Kosinski Brings Us Into the Cockpit with the Characters

Between the enthrallingly realistic acting from the actors when flying, the suspenseful cinematography, the tense score from Hans Zimmer and Lorne Balfe, as well as the crisp sound mixing of the jets taking off, the audience is in the cockpit when these characters are up in the air.  Not since Steven Spielberg’s ‘Saving Private Ryan’ has a film transported the audience into a scene this effectively through the use of sound alone.  Utilizing these elements, the flight scenes become more than simply mindless and unbearably long action sequences.  While fulfilling their purpose in the story, these scenes also hold our attention and play with our emotions like they’re pieces of music.

Of course, the film does have its little wink-and-a-nod moments and callbacks to the original.  However, they are not sprinkled in just for the sake of cheap novelty or unearned pops from the audience.  They have their perfect place in the film, contribute to the overall narrative, and add extra emotional weight to the events transpiring.  In other words, this film is everything an amazing sequel to an already great movie should be and was worth the long wait to finally see (but more particularly hear) in theaters.  To reiterate what has already been mentioned, ‘Top Gun: Maverick’ is better than the original, the best movie of 2022 so far, and quite possibly the best Tom Cruise film to date.

‘Top Gun: Maverick’ releases in theaters on May 27th.