Top Gun Then Vs. Now: ‘Top Gun: Maverick’ is the Movie I Thought ‘Top Gun’ Would Be 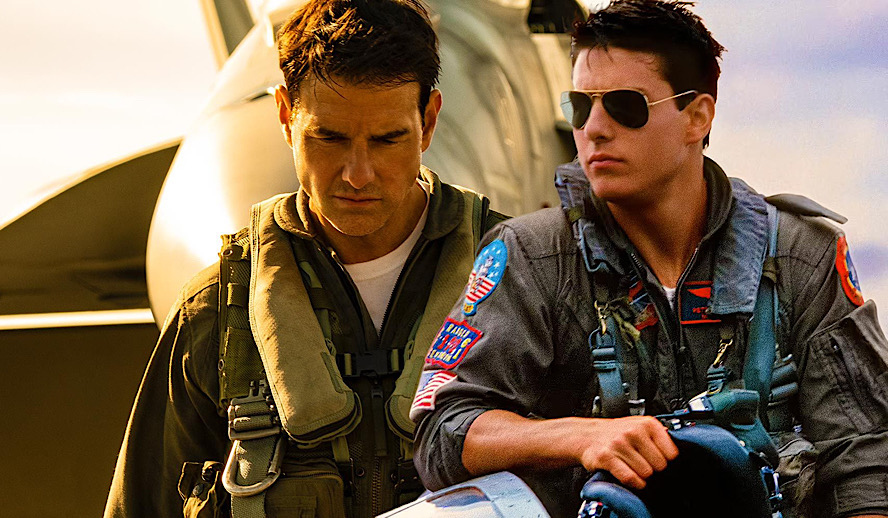 “You Have to See Top Gun”

I’ve heard the same phrase about ‘Jaws,’ ‘The Terminator,’ ‘Scarface,’ a whole score of 80s classics I didn’t grow up with. They took on a mythic status in my mind, and when I finally saw ‘Top Gun’ in high school I was underwhelmed. The flying was cool, but Maverick (Tom Cruise) was annoying, the jokes were corny, and the romance unconvincing.

At least, in comparison to the movie, I’d imagined for years. ‘Top Gun’ speaks directly to the decade it was produced in, and left a lasting impression on audiences who first saw it in theaters. Though not a bad movie, it’s not a classic in the same sense that ‘Casablanca’ or even ‘Jaws’ are classics. Of all the movies to revive at this moment, however, Top Gun turned out to be a great choice. There’s something powerful about practical effects that’s been missing from mainstream cinema recently, and those flight scenes are so incredible that in a decade or so I’ll be telling young people: “you have to see ‘Top Gun: Maverick.’”

‘Top Gun: Maverick’ pays plenty of homage to its predecessor, but also makes some effective changes that make it a far better movie. For one thing, all of the flight scenes use real footage. The original ‘Top Gun’ used plenty of real footage from outside the planes, and to great effect. But audiences’ eyes are sharper than ever these days, and when you rewatch ‘Top Gun,’ you can’t help noticing that the infamous inverted flight scene uses two different shots pasted together, and that almost all of the cockpit shots were filmed on a set on the ground. For ‘Top Gun: Maverick,’ Joseph Kosinski went the extra mile, having Tom Cruise guide the rest of the cast through a training program that would prepare them to ride in the cockpit with actual Top Gun pilots, who actually executed all of the uncanny aerial maneuvers in the film.

The movie is still ultimately a summer blockbuster. It’s meant to be experienced more than analyzed, and it relies on the same cool factor that the original did. There’s action, romance, and cool vehicles from Maverick’s motorcycle to Penny’s (Jennifer Connelly) boat. If Tom Cruise’s aviator jacket is not a selling point to you, then maybe it’s not your kind of movie. All that said, the movie does do some work reexamining the bravado of its predecessor and delivering the edge of aviation in a more nuanced way.

Hangman Out to Dry

One of the core ideas of the film is Maverick’s reckoning with the death of his wingman Goose (Anthony Edwards) while they flew at Top Gun together. In the original film, Maverick learns to let go of Goose’s death in order to maintain his edge as a pilot. In ‘Top Gun: Maverick,’ we see that, in a deeper sense, he hasn’t let go at all. This comes to a head when Maverick winds up instructing Goose’s son, Bradley ‘Rooster’ Bradshaw (Miles Teller), and has to both reconcile with his past recklessness, and teach Rooster to embrace the risks of being a fighter pilot.

This movie’s antagonistic pilot goes by the call sign ‘Hangman,’ (Glen Powell), which is directly reminiscent of ‘Iceman’ (Val Kilmer). He plays the foil to Rooster in a similar way that Tom ‘Iceman’ Kazansky did to Maverick in the original Top Gun, questioning Rooster’s fitness as a pilot. The way Hangman carries himself and brags, however, resembles Maverick’s demeanor as a young pilot at Top Gun, and we see that while Iceman has become a highly respected Admiral, Maverick has continued as a test pilot because he feels he’s unfit to do anything else. Rooster, meanwhile, demonstrates himself to be a cautious pilot who prioritizes above all else the safety of his team, and Maverick ultimately chooses Rooster as a wingman for the climactic, high-stakes mission over Hangman. The implication is that Kazansky’s method of flying–cold as ice, optimally, with the least risk of needless endangerment–is just as needed for success in the air as Maverick’s.

Whereas ‘Top Gun’ seems to praise Maverick’s risk-taking above everything, ‘Top Gun: Maverick’ presents a sharper edge by praising risk and method in tandem. An argument can be made that ‘Top Gun’ tried to do exactly that, but ‘Top Gun: Maverick’ does it significantly better. Iceman gets his due respect. Maverick’s romance with Penny is a more two-sided affair than his romance with his instructor Charlie (Kelly McGillis), which is, from a writing standpoint, entirely centered around Maverick and his wily flying. ‘Top Gun: Maverick’ borrows the best of ‘Top Gun,’ and refines the subpar into sleeker material than the first.

I have to acknowledge that my impression of ‘Top Gun: Maverick’ might come from a difference between my expectations and the actual film. When I first saw ‘Top Gun,’ the only thing I knew about it was that lots of people loved it. As it dawned on me that ‘Top Gun’ was more of a cultural moment than all-time great cinema classic, I was disappointed.

Going into ‘Top Gun: Maverick,’ I felt the inverse. Sequels, revivals, and adaptations are rampant nowadays. There’s something comforting about seeing familiar material, but also something fatiguing, and ‘Top Gun’ has never been a comfort movie for me, nor anywhere near a personal favorite. With that in mind, I expected to enjoy my family’s company a little bit, maybe chuckle here and there. I did not expect to audibly gasp and say “oh my god” a few times, despite being seated next to a stranger. Then again, given my low expectations, it might just be another flash-in-the-pan moment of glory, this time for my generation.

The best way to approach blockbusters like these is usually to manage expectations. You may have heard the rave reviews already, and they’re well-deserved. Just be prepared to revisit the mentality of the 80s. Take everything at face value, let yourself get lost in the adrenaline, and get ready for the flight of a lifetime.

Destination ‘Top Gun: Maverick’ was a nice stop on our cinema itinerary, but there’s always more. Tom Cruise will be starring in ‘Mission:Impossible – Dead Reckoning – Part One’ next year, with the second part scheduled for release in 2024. Miles Teller stars in ‘Spiderhead,’ coming out in June, as does Charles Parnell. Keep an eye out for the rest of the Top Gun recruits as well. You’ll be seeing more of them.