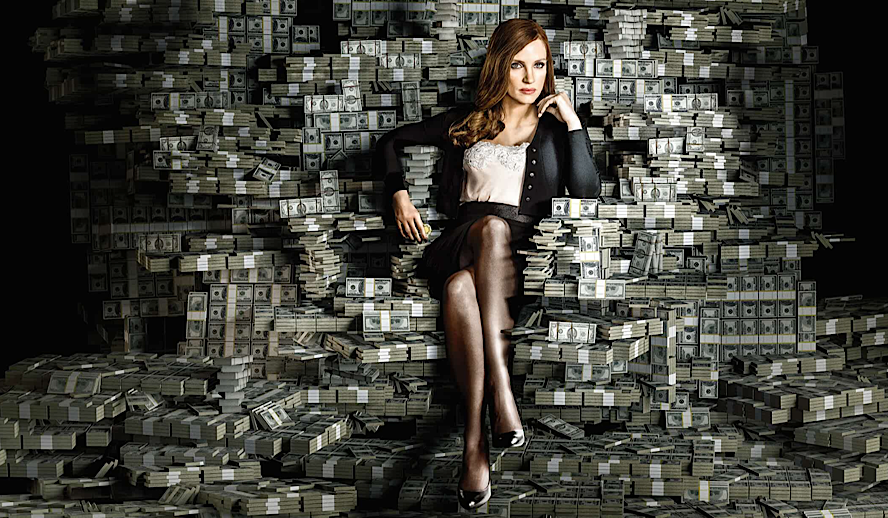 Based on an autobiography by the same name, Molly’s Game is the incredible story of a woman named Molly Bloom, who was behind the most exclusive and high-stakes poker game in the world, before it all fell apart. While Molly makes some mistakes, it is no question that she is a woman full of tenacity, self-assurance, and bravery. An incredibly empowering story of a strong young woman, Molly’s Game is a wild ride that will undoubtedly inspire you.

Overall, this film is an exciting watch. While it does diverge a bit from real events in order to capture a more dramatic narrative, it is based in fact. It may just inspire you to learn more about the real Molly Bloom, and how she utilized her pitfalls as learning opportunities for the future, working to empower women everywhere.

The A-list star Jessica Chastain embodies Molly Bloom in a manner that brings a real grounded approach to the character. Similar to prior roles in which Chastain has shone as an actress—including Maya in Zero Dark Thirty and Elizabeth Sloan in Miss Sloan—Molly Bloom is an extremely intelligent woman; whose confidence and authority are unquestionable. Not only did Chastain portray Molly on-screen, but she also narrated most of the film, filling the mind of the viewer with a fast-talking narration as if from Molly Bloom herself. Talking dizzying circles that put voice to her struggles, the film is an all-encompassing experience that draws you in from the start. Chastain’s portrayal of the character, with her acerbic and witty remarks, never downplays her intelligence, in fact, often using it as a weapon.

Supporting Chastain in this prominent role is Idris Elba, who plays Molly’s lawyer, Charlie Jaffey. The scenes in which Chastain and Elba throw witty remarks at each other like knives are phenomenal. Jaffey’s tempered impatience serves as the perfect foil for Molly’s haughty intellect. Further, because the exact character of Charlie Jaffey did not exist in real life—he is loosely based on Bloom’s lawyer Jim Walden—Elba was able to really hone his character to the story the film wanted to tell.

A Woman Surrounded by Men is ‘Molly’s Game’

In crime movies, it is rare to see a woman involved in the narrative who is not simply delegated to the task of being a ‘good wife’ and ignoring the gambling and other illegal activities her husband participates in. For the majority of these stories, men are the ones in focus. Molly’s Game changes that narrative. Not only is Molly Bloom at the head of an immense gambling ring she builds up herself, but she does so without resorting to the traditional female tactics of seduction. Of course, there are men who reveal themselves attracted to her, yet it is clear that much of her dressing up is done for appearance’s sake and even as a form of empowerment in itself. When she puts on her gaudy makeup, low cut dresses, and expensive jewelry, she is embodying her role as the “poker princess” and putting on the necessary armor for the role.

Molly Bloom’s entrepreneurial spirit is what truly drives this movie above all else. People are quick to criticize a film for faux feminism when they see a character excused of their mistakes and pushed up on a pedestal of empowerment. And yet they ignore the crime classics that focus on flawed male characters, who do not face nearly as much scrutiny. Molly’s Game unapologetically display’s Molly’s quick-wit and drive as what enabled her to become as successful as she did, and while she made mistakes, the film doesn’t shy away from them. Instead, those very mistakes are what serve as her learning lessons and make her a more well-rounded and strong female character.

From the get-go, this film moves quickly. The fast-paced voice over provided by Chastain, as well as the quick cuts serve to reinforce the high-stakes environment we see in the poker games on-screen. In a rare style, the film begins abruptly, speeding up from the start and eventually slowing down to give the audience a rest, before quickly zooming off again. A roller-coaster of a ride, the film switches between flashbacks and current struggles, which helps center the narrative while also keeping up the patterned pacing that moves from quick to calm in a manner of seconds. Primarily known for his dialogue-heavy writing style, Aaron Sorkin utilized this to his advantage when writing Molly’s Game, as it is a story that is bolstered by the racquetball wordplay as well as the explanatory voice-over. Furthermore, this was Sorkin’s directorial debut, and he expertly juggled the complex and interconnected narrative in a way that sings on screen.

In the end, Molly’s Game is not simply a movie about the flashy life of running elite poker games. It is actually about the wider human experience, delving deeper into the personal struggles of such a powerful and seemingly untouchable woman.

Molly’s Game is currently available to watch on Netflix or to own digitally.

If you are interested in learning more about Molly Bloom’s story, take a look at her autobiography, which served as the basis for the film.