Sad Girl Autumn Is Putting Out a Lot of Music: Adele, Taylor Swift, and Kasey Musgraves to Name a Few 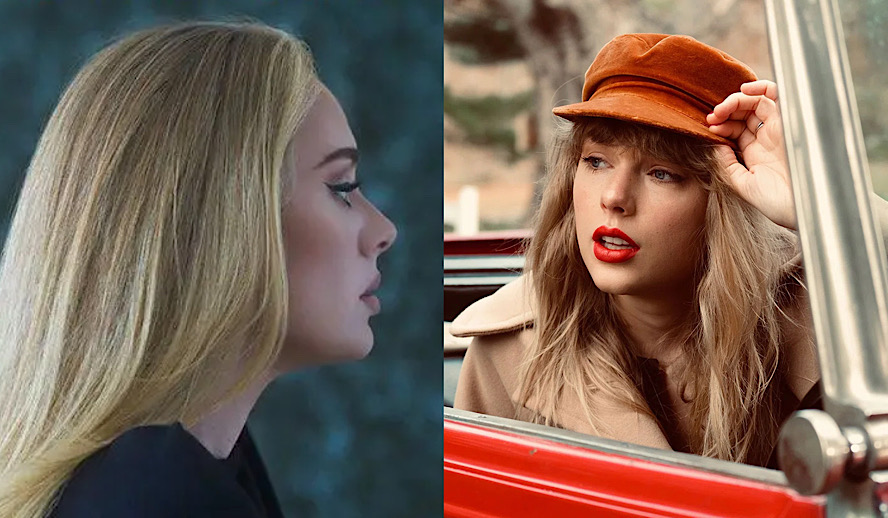 Based on the music that I have been blasting the last few weeks, I’m positive that my upstairs neighbor thinks I’m going through something. Since my roommates and I have religiously switched off between breakup albums, I can understand how someone might draw this conclusion. Apparently, belting out ‘I Bet You Think About Me’, ‘Woman Like Me’, or ‘Good Wife’ is a red flag? In reality, though, we are doing fine (all things considered), it’s just that time of year. What I mean by that is that it’s Sad Girl Autumn; a name that aptly describes the moodiness surrounding this time of year. It’s not a bad thing, in fact, I’m kind of here for it. But what does it even mean and does my neighbor need to check in on me?

Why Are We So Sad?

Maybe you’ve heard of Hot Girl Summer, which Megan Thee Stallion taught us meant having fun, being hot, and doing things for yourself and not for the benefit of men. The Sad Girl is a close relative of the Hot Girl, only with a touch of seasonal depression and a knack for pumpkin flavoring. “A Sad Girl is not the opposite of her predecessor, the Hot Girl. Instead, think of the Sad Girl as her cozy, moody sister. In Sad Girl Fall, we’re subtweeting instead of sliding into DMs. We’re swapping out bodysuits for cable-knit sweaters and trading Aperol Spritzes for chai tea. A sad girl is still very much That Bitch™ in the same way as a Hot Girl. She’s just cold and a bit over it,” explained Elle, quite elegantly if I do say so myself.

We aren’t just sad about the warm weather slowly disappearing, or the sun setting mid-afternoon, well we are, but it isn’t just that. Fall also means school starting, seasonal colds, and perhaps too much family time, all while trying to cope with an ongoing pandemic. There are obviously great parts too, but there is some fun in leaning into the gloominess of it all. It seems that some of the most popular artists agree and feed into this idea of Sad Girl Autumn by providing music that allows us to indulge in the general ughhhh-ness of these months.

Some people argue that there isn’t a strategy behind releasing a song or album at certain times of the year, such as Nate Sloan an assistant professor of musicology at the University of Southern California. “These artists aren’t trying to capture the zeitgeist or general social and economic anxiety of the world, but they are tapping into their emotions and broadcasting it to a larger audience. Artists reach into their own life experiences and translate that into songs that everyone can enjoy,” said Sloan to NBC. While that may be true, it’s way more fun to think that they banded together to create one large season of tears.

In the past few weeks, numerous artists have released songs, if not entire albums, centered around heartbreak. There are a few that instantly come to mind, such as Taylor Swift who is in the midst of re-releasing her previous albums. Taylor might actually be the creator of the Sad Girl Autumn after releasing multiple different versions of the ballad “All Too Well”.

On November 12th she released the long-awaited 10-minute version alongside a short film featuring Sadie Sink and Dylan O’Brien. That wasn’t enough though, so on November 17th, she got even more emotional with “All Too Well (Sad Girl Autumn Version)” recorded in Long Pond Studios. The singer tweeted, “One of the saddest songs I’ve ever written just got sadder.” In the post, she also tagged her “besties”, aka frequent collaborators Aaron Dessner and Jonathan Low.

While she may be the only one with Sad Girl Autumn in the title of her song, she’s not the only one to participate. Adele released her fourth studio album ‘30’ after six dreadfully long years and, it’s fair to say, it collectively ripped our hearts to shreds. MSNBC’s Zerlina Maxwell, while discussing Sad Girl Autumn and its implications with President of Futuro Media Group Maria Hinojosa and actor Cristela Alonzo, joked that the album should come with a warning to listen with your therapist present. “Ladies, can you be honest, were either of you cuddled up with a glass of red wine and a box of tissues, next to a fireplace, maybe your therapist on stand by, listening to Adele?” Maxwell asks.

Not interested in Taylor or Adele? Don’t worry, there are plenty of other artists that can help you get into the zone. Kasey Musgraves released her album ‘Star-Crossed’ in September, which delves into her marriage and painful divorce. “Writing in the plain language of someone desperate to be understood, she sounds alternately vulnerable and triumphant,” reviewed Pitchfork. She knows exactly what she’s doing too, tweeting about stick-on tears and handkerchiefs sold in the box set specifically in celebration of Sad Girl Fall.

Mitski’s new album ‘Laurel Hell’ won’t come out until February, but she did release a single accompanied by a music video for ‘The Only Heartbreaker’. “The music video reflects the world-crushing emotion expressed in the song of knowing that you’ve inflicted pain on a loved one,” said Variety.

Summer Walker also put out a new album, ‘Still Over It’, a callback to her 2019 debut ‘Over It’ on November 5th. The 20 songs explore a complicated and messy breakup, featuring artists like SZA, City Girls, and Omarion to name a few. It’s a mixture of rage, shade-throwing, and regret bundled into one amazing product.

Pretty much any song is fun to sing in the shower but there is a specific genre of music that makes you feel like the Main Character, and Sad Girl Autumn panders directly to that audience. It’s no mystery that listening to music can evoke particular emotions or bring up memories. Verywell Mind editor and licensed social worker Amy Morin said to Refinery29, “[Music] definitely has the ability to change the way we think and feel. For a lot of people, it stirs up emotions. It might remind them, ‘Hey, it’s not okay for myself to be treated like this.’ Or, ‘I can do better.’ I think it could empower people to create change in their life. In some cases, that may involve changing the relationship or making peace with ending it.”

There is something extremely cathartic about belting out painful experiences, especially when you can relate indirectly. “Sometimes feeling sad can make you feel good because it makes you appreciate being happy,” said Cristela Alonzo during her interview with MSNBC. According to UC Berkeley professor of psychology Dacher Keltner there is a reason for this. “The current thinking is that the acoustic features of music resemble how we communicate emotion with our voice. Your brain is saying, ‘That song is representing sadness, and I’m feeling it, but I’m feeling it in this aesthetic, musical context.’ This makes it a different kind of emotion than your own actual sadness,’” said Keltner to Refinery29.

So while Sad Girl Autumn will eventually end, there’s always time to be melodramatic. Hopefully, as winter closes in, some of that will turn into more positive thinking with more upbeat music to match. It doesn’t actually matter though since I’ll be playing All Too Well (Sad Girl Autumn Version) well into spring and summer. Hopefully, my neighbors catch on by then that I’m fine, and that it’s just super catchy. Oh, and also that I’m the Main Character.