Positive Masculinity in ‘Spider-Man: No Way Home’ – How Spider-Men Across Generations Flipped the Script 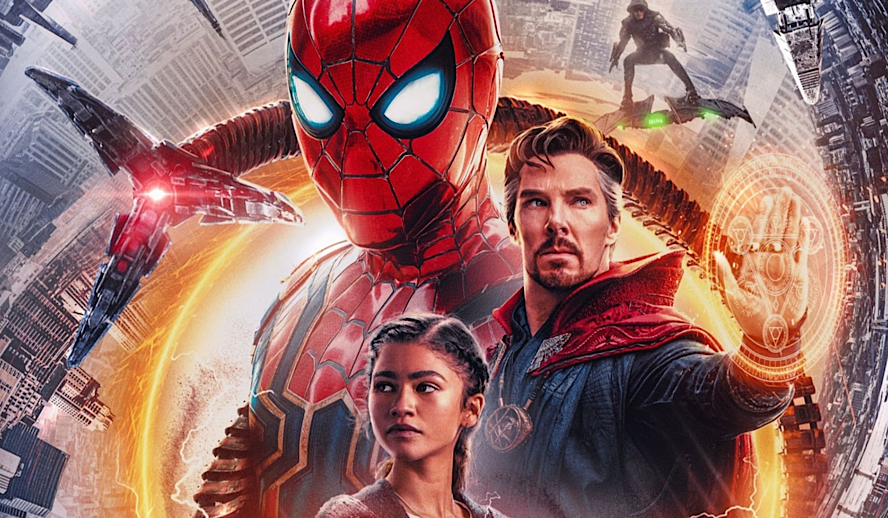 ‘Spider-Man: No Way Home’ swung full-speed into theaters, grossing a massive $260 million at the US box office within 4 days of its theatrical release. Delivering on virtually all fronts, the third of the Jon Watts Spider-Man flicks picks up from the cliffhanger ending of ‘Spider-Man: Far From Home’, and brings back a slew of familiar faces on Peter Parker’s (Tom Holland) mission to set things right. It has the signature city-swinging sequence, a plot-driven by consequential character choices, and heartwarming, often hilarious writing. As an added bonus, MJ (Zendaya) sees some real development and what has been an underwhelming romance finally comes together as MJ and Peter make decisions that form one another.

The movie drives forward with minimal clunkiness, and without compromising its more serious moments, a considerable feat given the number of characters who are given moments to shine. Alfred Molina and Willem Dafoe are particularly captivating in their reprised roles. What makes this movie stand out as one of the best in Marvel’s ever-growing catalog, however, are the interactions between Spider-men past and present.

Flash Thompson (Tony Revolori) may have been onto something. At the core of every iteration of Spider-Man lies the choice Peter Parker inevitably faces to give in to anger and despair or to rise above and live up to the call of his mentor. Early in the movie, Peter resolves to rescue rather than defeat the enemies that have begun to pour into his world. Masterful editing keeps the story going while the script subtly reminds us that Peter is well-intentioned and rather brave to accept a charge from Aunt May (Marisa Tomei) to help even the most dangerous of people: “This is what we do. We help people.” It is precisely in this height of virtue that tragedy strikes, and Peter falters. In both the Sam Raimi trilogy and the more recent Marc Webb movies, we have seen Peter fall into a dark place. His dark side makes an appearance once more in ‘Spider-Man: No Way Home.’

This time, however, it is met by two, more experienced Peters. Tobey Maguire and Andrew Garfield each add a personal touch in the many scenes that show the Peters helping each other to heal, to act the way their Uncles Ben and Aunt May would want. Maguire’s Peter gets to pass on what he’s learned and see the younger Peters carry on the duties of being Spiderman. Garfield’s Peter opens up about the loss of Gwen Stacey that broke all of our hearts in ‘The Amazing Spider-Man 2,’ giving the youngest Peter a window to process his own anger and grief, and later in the movie receives closure.

We even get to see the three working as partners in a lab. These scenes take us back to the good at Spider-man’s core and show us the internal, emotional work it takes to be a hero, super or not.

With superheroes abounding in popular media, filmmakers of all kinds have worked to make their movies and TV shows stand out with fresh takes and meta-commentary. It’s a rich question, after all, and one that has many answers: What does it mean to be endowed with superpowers or abilities? As a result, many superhero movies and TV shows have depicted antiheroes who fall more accurately under the category of ‘superperson’ than ‘superhero’: Deadpool, Suicide Squad, Invincible, and The Punisher, to name a few.

Fascination with antiheroes, and even with villains, isn’t new to Hollywood, nor generally. People have always been fascinated by the “one bad day,” as The Joker famously posits in “The Killing Joke,” that separates a person from the evil within them. Amidst a recent abundance of morally gray or villainous characters, ‘Spider-Man: No Way Home’ chooses to embrace the hero’s virtuous triumph, and does so without being saccharine.

After experiencing the kind of tragedy that could make for a villain’s backstory, Tom Holland’s Peter Parker feels vengeful and enraged. In this moment, when other filmmakers might have leaned into their hero’s downfall, Jon Watts, the writers–Chris McKenna and Erik Sommers, and the cast instead take a deep dive into how men can support one another in their darkest moments. Men who were endowed with superpowers before their brains have fully developed. Men who have become villains. All the ambition, fear, and rage that has resulted in disaster in past Spider-man stories is here redirected towards forgiveness and sacrifice. Best of all, the youngest Peter Parker walks away uncompromised, the ultimate achievement in a movie that upholds goodness and heroism in the face of tragedy.

We needed this sort of movie, strangely enough.

That said, coming-of-age stories about young men don’t always include sensitive, vulnerable male relationships, and rarer still is the objective to be upright and heroic rather than just okay. Furthermore, the idea of a complicated or disturbed young man has been co-opted to defend a number of shooters and domestic terrorists in the past decade, and it has become more important than ever to get it right. The movie does an excellent job of showing the Peters working through emotional baggage, and not making excuses for bad behavior.

‘Spider-Man: No Way Home’ serves as an effective anecdote to an oversaturation of poorly conceived stories about young men in Cinema history. It delivers examples of strong, vulnerable men, most importantly to the boys and young men who have looked up to Spiderman since his inception.

We haven’t seen a fourth movie in any Spiderman series yet, and the ending of the most recent one will leave you unsure of whether to expect one this time around. The IP has not become any staler than anything else in the MCU, however, and Marvel Studios doesn’t show signs of slowing down. You may wonder: what’s next for Spiderman?

In a recent interview with Brooks Barnes of The New York Times, producer Kevin Feige said “He’s going to show up sometime. The when and the where, of course, is the fun part – and the part that we don’t talk about.” Regardless of how he returns, you can look forward to more of your friendly neighborhood Spiderman, and you almost certainly will after seeing ‘Spider-Man: No Way Home.’

As for the actors, you can look forward to more Tom Holland when ‘Uncharted’ hits theaters this week, and Zendaya has continued her powerful performance in the second season of ‘Euphoria,’ which will reach its finale this month. Benedict Cumberbatch, meanwhile, is in contention for Best Actor at the Oscars this year for his performance in ‘The Power of The Dog.’