America’s Favorite Sitcom, ‘Seinfeld’, Will Be Coming To Netflix Later This Month 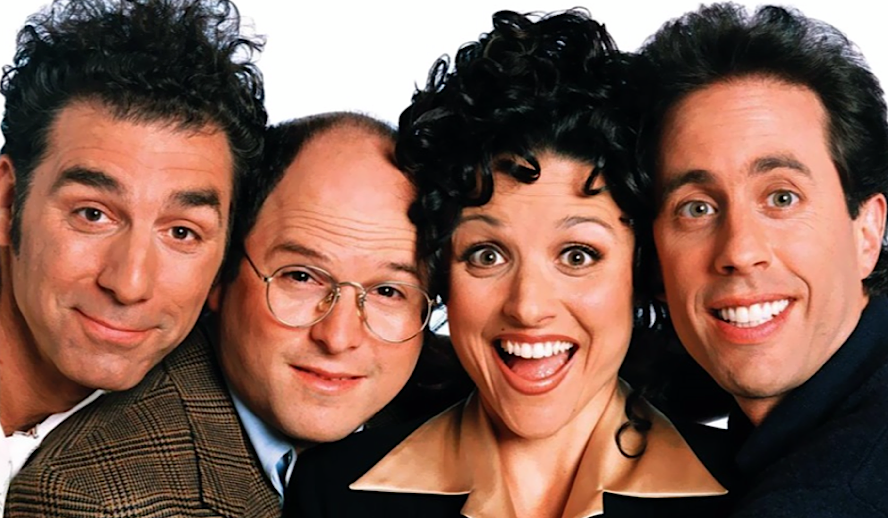 Arguably one of the best sitcoms to ever grace America, ‘Seinfeld’, made its debut on July 5th, 1989. The show became a major success, running for approximately nine years, and producing over nine seasons until its final episode on May 14th, 1998. ‘Seinfeld’ was created by comedians, Larry David, and of course the man of the show, Jerry Seinfeld. Larry is known for his involvement in other popular shows such as the 2012 movie reboot of the classic slapstick show, ‘The Three Stooges’, and the popular 2000s sitcom, ‘Curb Your Enthusiasm’.

Jerry Seinfield is known as a stand-up comic in the late ’70s to early ’90s. Jerry is more recently known for his voice work as, Barry B. Benson, in the 2007 DreamWorks animated film, ‘The Bee Movie’. Until this day, he is still pretty active in the comedy world. Jerry specializes in observational comedy, deadpan comedy, and satire amongst other categories.

It is easy to find those genres of comedy within the ‘Seinfeld’ show. The cult classic show became so popular due to its highly lovable cast including, George Costanza, Elaine Benes, Kramer, and of course, Seinfeld himself, and the way into turned the average, or mundane into something hilarious and relatable. ‘Seinfield’ was groundbreaking at the time, and deserved every ounce of success it has gained. In fact, the show happened to be so iconic that there are still networks that will put the show on the air, even 20 years post mortem.

Usually, networks such as, NBC  and TBS will play reruns of the show between one and two in the morning, Eastern Time. However, this summer, the beloved sitcom will be available to stream on Netflix later this month. Although we know for sure June is the month for its release, the exact date is still To Be Announced. It is also confirmed by the Netflix chief content officer, Ted Sarandos, that the show’s picture quality will be renewed in beautiful 4k, making the appearance of the show more crisp, clear, and in a way, modern.

After running into issues with previous features, It is obviously no secret that Netflix made sure that they would acquire the rights to stream the iconic sitcom. I bet you are wondering how they could have possibly pulled that off, given both the popularity of the show and the competition within the distribution companies. Netflix has partnered with Sony Pictures Television, the company that has control of the distribution of the culture-defining sitcom. Netflix will be offering all nine seasons of the sitcom, making it available for ultimate global viewership.

Netflix, who has previously lost the rights to popular sitcoms such as ‘The Office’ or ‘Friends’, seemed to be very determined to gain a popular sitcom back onto their roster. The fact that the popular streaming service was able to get their hands on such a big name like, ‘Seinfield’ is quite an achievement for them at the moment, considering it is almost like the godfather of modern-day sitcoms.

As exciting and random as this news was to me and possibly many others, Netflix had actually been planning for this to happen for quite some time. How could this possibly miss so many people’s radars? Back in 2019, Netflix announced that it would be picking up the global rights for the popular sitcom. It landed in competition with HBO Max and what is now known as, Peacock amongst other companies.

Reportedly, Netflix was aggressive with its pursuit of this sitcom, due to the reasoning of it appealing to a vast audience, comprised of many different generations. One thing for sure is the streaming service definitely has its game face on for this conquest. According to sources, Netflix is even absorbing the rights to the show from popular streaming services such as, Amazon Prime Video which has international rights, and Hulu, whose rights to the sitcom have expired in 2021 anyway.

Business Should Always Benefit Everyone Involved

This has been a very wise business move for Netflix, and they seemed to have done a good job in keeping all things concrete. I think the best part about this deal, in my opinion, is the fact that everyone is making their fair share of profit. The original ownership of the sitcom was Castle Rock studio, which is no longer in existence. The ownership is now shared amongst WarnerMedia, CBS, the show’s co-creator, Larry David, and the creator himself, Jerry Seinfeld.

In turn, this means all partners will split the profit that is made off of this five-year deal. I have always respected artistic integrity and felt that creators should always be entitled to their share, and distributors should always honor that. Unfortunately, It is not very often that a deal like this is so clean-cut, fair, and transparent. In my opinion, It really does feel like this deal is more invested in being in a true, collaborative partnership, and providing nostalgia and entertainment for viewers of all generations.

Their goal becomes even more apparent with their choice to update the picture’s quality to 4K resolution. It definitely reads as them trying to appeal to everyone with this renewal. I know at the end of the day, business is business, but I can appreciate it when a business deal makes sense, and benefits everyone involved. These factors make me so much more excited (which I did not think was possible) to give my viewership to this renewed sitcom and to this streaming service.

‘Seinfeld’ is more than just a sitcom to many, it was the birth of a new form of comedy. Many shows have taken the seeds that ‘Seinfeld’ has provided, and produced more comedies that we have all grown to love. It is the gift that keeps on giving in the world of comedy. My hope is that audiences will be informed very soon on when the exact release of ‘Seinfeld’ will be, but either way, I truly believe this addition to the streaming service will excite Netflix users everywhere of all ages.

Hinting: Jerry Seinfield has an upcoming tour date on July 8th at 9:00 pm, at ‘The Hall @ Live’ venue in Hanover, Maryland. Tickets are available on the website www.jerryseinfeld.com