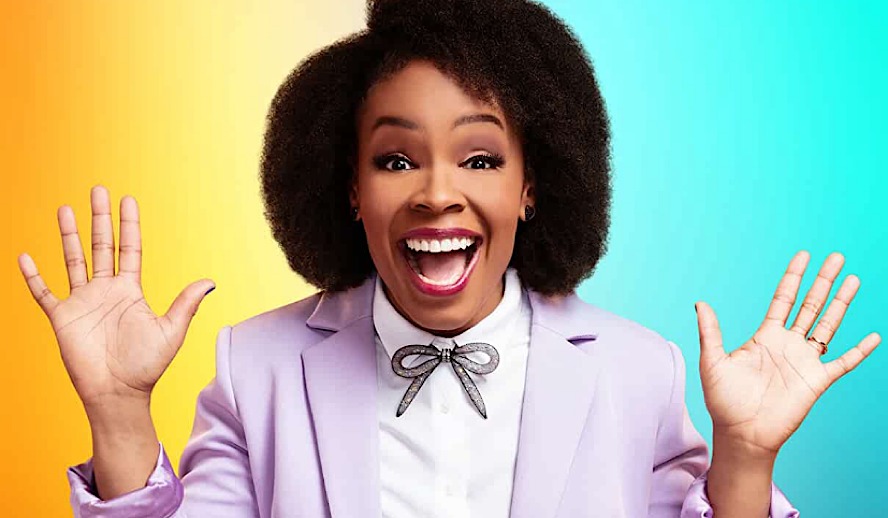 NBC’s new streaming service Peacock is spearheading its stake in Late Night TV with a hilarious, talented, and powerful new voice at the helm, Amber Ruffin. Ruffin brings an incredibly unique and culturally literate perspective that the world, and especially late-night television, has needed for many years. She brings a vast and impressive resume to the role, with appearances on Drunk History and Key and Peele, and writing credits for Sam Richardson and Tim Robinson’s show Detroiters,  A Black Lady Sketch Show,  and her primary job as a writer at Late Night with Seth Meyers since 2014, where she also became the first black woman to write for a late-night network talk show in the United States. Ruffin is the head writer of Late Night with Seth Meyers, along with her own show with fellow Late Night writer Jenny Hagel, and a team of talented staff writers that include Brooklyn Nine-Nine writer Dewayne Perkins, Demi Adejuyigbe , and former Busy Tonight writer Shantira Jackson. The show is not only belly aching funny, but riveting, and holds a megaphone up to voices that are more important now than ever.

Ruffin walks out on HER stage in a gorgeous suit and elaborate bowtie with a medallion for the first episode. She is energetic, enthusiastic, and jolly, even when she’s making a cutthroat joke which makes it all the funnier. Filming in Studio 8G in Rockefeller Center, the same studio Seth Meyers is filmed. The show is meant to have a live audience, but due to COVID-19 pandemic restrictions there’s just Ruffin, and her, what she refers to as “announcer, sidekick, and real-life old friend” Tarik Davis, who’s acted in several acclaimed shows, recently in The Iliza Shlesinger Sketch Show, and on Late Night with Seth Meyers 2016-2017 seasons. There won’t be any guests on The Amber Ruffin Show, which is a bit unconventional for a late-night program, it will just feature sketches and jokes about the news. From the first three episodes, Amber Ruffin handles the spotlight excellently, with Tarik adding support to Ruffin, playing characters, doing bits, and occasionally sharing his own fresh take. The show is less than thirty minutes long, and it can be viewed for free on Peacock.

The best part of the show is that it combines witty, clever, and oftentimes silly comedy with fascinating political and social commentary from a perspective that’s been widely ignored in late-night TV.  Ruffin delivers commentary on the current social climate in an authentic way that’s not only humorous but thought-provoking as well.  Ruffin brought her bubbly and engaging personality onscreen multiple times on Late Night with Seth Meyers, with one of her most famous and impactful appearances being when she talked about her experience with police brutality. From an industry that’s been mostly dominated by white men, Amber Ruffin is pioneering a new wave of late-night television and adding diversity late night has never seen before.

The first joke on her program represents that well, with the strong on two-liner; President Trump attended a campaign rally in Florida last night. Said COVID-19 “oh my god, same!” Jokes as strong as this come out nonstop, and the segments are equal in quality. Ruffin introduces a segment called “Fact Check,” in which the fact-checking tool is “common sense” and features hilarious jokes like; In an interview on Monday President Trump said that the phrase Black Lives Matter is bad for black people. I fact-checked that statement and I found out that it is in fact… not true! Or there’s her “White Forgiveness Clock” that runs for 48 hours, but every time someone causes “a big transgression against black people” it resets, and funny enough, it barely ever gets through two minutes.

Ruffin ends her first episode with a sketch, a silly lullaby, and then a goodnight message from a special guest. This establishes a structure the proceeding three episodes follow, with the only deviations being different jokes, sketches, segments, and more Tarik, who’s off the walls funny and a delightful addition to the show. He and Amber Ruffin go back and forth often; one of the funniest moments being when Tarik tells a spooky story about going to his neighbors for dinner, and Ruffin interrupts with her own story. The two create a camaraderie that’s fun, playful, and engaging.

The second episode introduces a segment that’s so purely reflective of Ruffin’s comedic, unique, and powerful voice titled “Colossal Failures in Allyship” where she calls out white people attempting to stand up for Black people, but ultimately failing. With many captivating and laugh-inducing segments and jokes, the second episode ends with yet another surprise guest, but not one people may expect. Ruffin is fully supportive of the Black Lives Matter movement, as is the Hollywood Insider media network, and rightfully critical of Donald Trump. This isn’t abnormal for late-night hosts to share these opinions, but Ruffin’s presence outshines everyone in the current social climate. Frankly, late-night television has needed her since 2016.

Ruffin is so fun and free-spirited while balancing it with powerful rhetoric, clever viewpoints, and all through a polished comedic lens. Ultimately though, Ruffin is entertaining to watch and listen to whenever she’s doing anything, it’s the powerful personality that’s earned her top positions at such a young age and established her as a trailblazer in late-night television.

The most memorable moment so far is in the third episode, where in response to President Trump’s supreme court nomination of Amy Coney Barrett, Ruffin and Tarik do a specific song and dance.  It’s quite shocking to see, but the commentary behind it is so powerful. Amber Ruffin’s show is showing signs of being a historic milestone for late-night television, and a show that’s not going anywhere anytime soon.

The Hard Work of a Superb Comedy Writer

She is keeping her position as the head writer of Late Night with Seth Meyers while also writing and hosting The Amber Ruffin Show. Ruffin is utilizing her talents and resources remarkably and soaking up opportunities rather than shying away from it, then working hard to make sure it’s the highest quality it can be. Her career in the past few years is evidence enough to show she’s not only incredibly talented, hilarious but also an extremely hard worker. Ruffin’s kind of work ethic is unmatched by anyone in network television, juggling two senior-level jobs for a major media company; NBC. The tenacity of Amber Ruffin is inspiring, and a massively significant step forward for people of color, especially those pursuing careers in the media industry.

Amber Ruffin will be talked about in history the way parents and grandparents talk about Johnny Carson, who was also a pioneer in his own right. For far too long, late-night television has primarily been from the perspective of white men, some white women, and very few people of color. During a time when disagreements over what’s considered racist and misogynistic have come to a peak, the voice that Ruffin is providing is imperative in the late-night comedy scene and in the United States.

The show is on every Friday night and can be watched for free on Peacock.