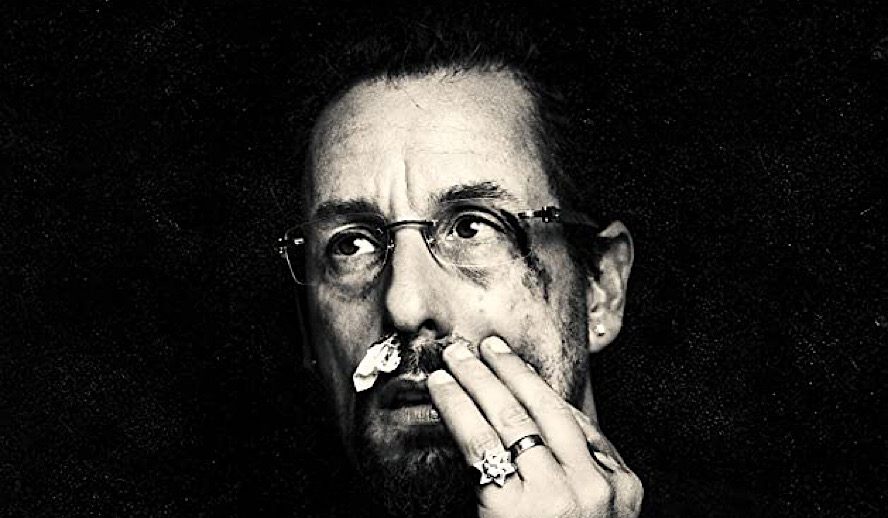 Agreed by many to be the most stressful movie ever made, Benny and Josh Safdie’s 2019 title Uncut Gems proved to be one of the best films of the year. Conceived in 2009, and having gone through multiple major changes in script and cast, the film bears witness not only to the complete dedication of the filmmakers to their vision but also to their ever-evolving ability to make films of unprecedented energy.

Influenced by the directors’ father’s experiences in NYC’s Diamond District as a gems salesman, the story follows Howard Ratner (Adam Sandler), a self-indulgent jeweler, on the brink of divorce, who has gotten himself in deep with gambling. But when collectors raise the pressure for payback, he will be putting all at risk again by betting on the auction sale of an uncut rock of Ethiopian black opal that he has clandestinely acquired. We track Howard, as he lies, cheats, stalls, diverts and delays, while at the same time gets mocked, dismissed, pushed around, yelled at, stalked, locked up, threatened and hit. The genius of the narrative is that even though there is barely anything to like about the character, we find ourselves rooting for him at the end.

Focusing on the double themes of self-making and self-destruction, the film can be described as a gritty neo-noir psycho-drama. However, it also wouldn’t be wrong to say that, along with their previous feature Good Time, the Safdie Brothers are slowly defining and creating a new genre of anxiety-inducing cinema.

Uncut Gems, The Movie As A Panic Attack

This is demonstrable as the action and tension in the narrative steadily rises all the way through to the end – along with our cortisol and adrenaline levels. The viewing experience is both exhilarating and exhausting, as Howard disappoints us at every turn, obstinately refusing to take responsibility for his actions and failures, to accept his fate, and to save himself while he can. Once it’s over, we are in awe with what the filmmakers achieved but also wrecked from this most stressful journey. And this just shows how ingenious and powerful of a movie Uncut Gems is. What the filmmakers do with the pace and narrative layering is formidable, and it’s no surprise that the movie took numerous awards for Best Editing.

THE URGE TO LOSE IT ALL

We can come up with multiple words to describe Howard’s actions: addiction, obsession, compulsivity. However, the quasi-mystical gem that circulates as the main metaphor of the movie opens up an analysis of Howard and his relationship to “winning” that cannot be reduced to pathological gambling or greed.

There is a scene in the first act when Howard lets Kevin Garnett to closely inspect the rock he has been wet-dreaming about for the last year and a half of his life. We see Kevin holding the rock close to his face, and the camera dives in to disclose a cosmic view, interspersed with fastly disappearing images of the Jewish miners in Ethiopia and Kevin’s personal past, hinting at the interconnectedness of all life in a single atom. The sequence ends with a violent burst as the glass case Kevin was leaning on shatters under the pressure of his weight. Taking this as the sign that he is connected with the gem, he asks to hold on to it for the game night, setting the stage for Howard’s latest bet spree.

However, we don’t get a corresponding scene of Howard looking into the gem to face his own reflection. Is this because Howard is essentially defined by an emptiness, a hollowness for the transmission for something else? Indeed, the connection between the gem and our protagonist goes through a much more buried, one could even say subterranean, domain: the colon. When we are first invited into the micrographic images of the hypnotic rock, revealing multiple hidden galaxies, we don’t expect our exit to be through the projection of a colonoscopy. This is also our first introduction to Howard, through his passage of excretion.

What does this image tell us? In 1908, Freud famously observed the etymological and linguistic connections between gold and excrement, to conclude that money-hoarding is just a sublimated version of the infantile fear of letting go of excrement which the child perceives as part of their body/ego. Howard definitely is no Scrooge, and his doctor tells him there are no signs of cancer in his body (a condition that is usually related to chronic constipation, as well as genetic disposition). We are therefore led to reflect on another funny set of associations: the uncut gem as both the distillation and excretion of Earth and History, the process of value-creation from worthless sh*t to precious rocks, the self-emptying, self-destructive urge of one man to realize the circle of life, the glass chamber of the jewelry store as another metaphor of what can and cannot be contained. The movie’s final image in glittering red reminds us: it’s the cut that gives the dazzle.

A NEW KIND OF ICARUS

One the one hand, Howard is extremely narcissistic and shows no amount of self-reflection; he only hears himself and is completely oblivious to anyone else around him as long as they are not instrumental to his immediate desires. His lack of awareness in terms of the gravity of what starts circling him, even in the most desperate of moments, can only be explained by the extent of the investment he has on his own ego. But, on the other hand – and this is what makes this flawed character pathetic and sympathetic at the same time – he is not respected, feared or admired; he has neither authority nor gravitas; he is constantly seen trying to “get in” to spaces that keep on pushing him out.

This double-edge gives momentum to his self-destruction, as his obsession with “winning” seems to be less about monetary gain, and more about finally proving himself to the world as a “winner.” Howards does not just want to win; he wants to win big, he wants to win against the greatest odds, and he wants to be witnessed doing it all. “F*** you for doubting me,” he states. Only someone who is a loser will be so fixated on reaching the stars. An unexpected New York spin on the classical myth and tragedy: An Icarus who would risk death in order to show others that he can reach the sun.

THE DRONE AND THE BUZZ

When one the characters state that he’s claustrophobic, he mirrors our feelings of entrapment as we are pulled into the unstatic and extreme close-ups of the Safdies’ camera. The original drone score by Rich Homie Quan (as Dequantes Lamar) captivates and creates the mood in perfection. Last but not least are the superb performances by the whole cast, who carry the movie with the utmost energy. Adam Sandler displays his best work as an actor and lays bare his full dramatic potential, which should have been recognized at the Oscars. LaKeith Stanfield is brilliant as usual, and Kevin Garnett proves himself to be a worthy final choice for the role. But above all, it’s the first-timer Julia Fox who steals the show, leaving us excited to see her more in new titles in the coming year. In sum, Uncut Gems proves to be the kind of drug you want to get high on.