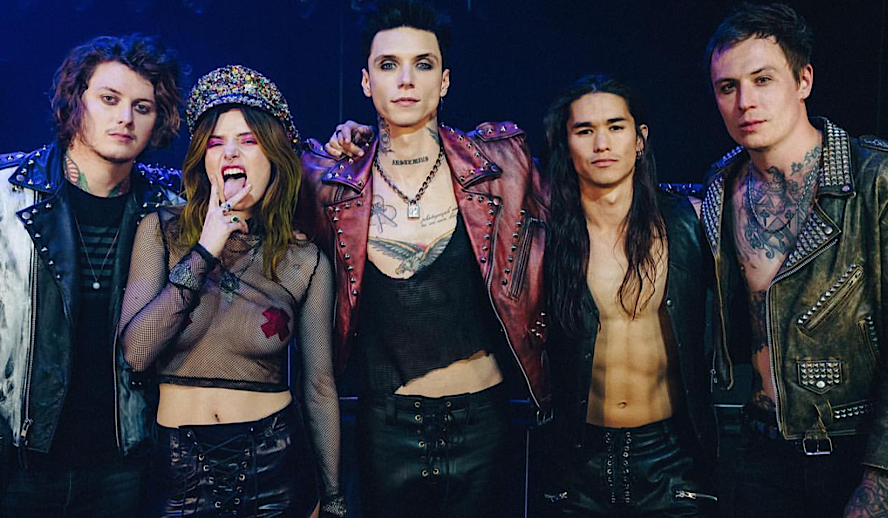 To add to their growing inventory of original content, Amazon Prime has recently dropped all eight episodes of their newest drama series ‘Paradise City’ which fans are quickly devouring. With an extensive star-studded cast, accurate representation of the flashy and exhausting Los Angeles lifestyle, along with cameos from famous rock stars themselves, this show promises to be a success.

‘Paradise City’ follows the contentious rock band The Relentless while the lead vocalist. Johnny Faust, (Andy Biersack) navigates his reemergence into the spotlight after harboring a dark secret from his past. Meanwhile, a teenager on the other side of the country, Simon, (Cameron Boyce) lives alone with his single mother due to his absentee famous record producing father and idolizes Johnny as he has his own dream of becoming a famous musician. Director, creator, producer, and writer of the show Ash Avildsen spoke to Decider in an interview where he explained that Boyce’s storyline mirrors real-life events of his own that the show was inspired by. From being raised by Avildsen’s single mother to an equally estranged famous father, this show is grounded by authenticity.

What originally drew me into the very first ten minutes of the show was the impressibly immersive portrait that was painted of Los Angeles and the wildly exciting imagery and behind-the-scenes culture of the music business. The opening scene takes place in one of L.A.’s hottest nightlife venues, On the Rox, located directly above the famous Roxy Theater. The pilot episode is also doused with gorgeous shots of Mulholland Drive, lavish Los Angeles mansions overlooking the city, and the chaos that ensues on the Hollywood Walk of Fame after dark.

Anyone interested in the ins and outs of L.A.’s music scene will be instantly enthralled with the series. I also immediately took a liking to the dual storylines that somehow seamlessly contrasted with one another. In The Relentless’ plot line, viewers are granted an inside look at a band who has had considerable success in the music industry and how difficult it becomes to maintain their fame in contrast to Boyce’s storyline which follows his character as he is just forming his own band and aspires to leave his small east coast town to make it as a famous singer in L.A.

What viewers of ‘Paradise City’ may not know

What some fans of this new Amazon show may not realize is that ‘Paradise City’ is a spin-off series from the 2017 film ‘American Satan which was also written and directed by Avildsen. The movie similarly followed The Relentless’ journey to stardom and how they would stop at absolutely nothing to make it big in Los Angeles. In ‘American Satan’, Biersack and Boo-Boo Stewart (Disney’s Descendants, Julie, and the Phantoms) got to reprise their same roles in ‘Paradise City’ following the success of their cult-following film. Fans of the movie were delighted to hear the news of a spin-off series that was announced in 2018.

Andy Biersack spoke on the differences between the movie and the television series in an interview with Alternative Press where he revealed the show goes deeper into the lives of each of the individual band members. Considering Biersack is the lead vocalist in an actual rock band in his real-life (Black Veil Brides) allowed him the authentic portrayal of his character Johnny. He even joked about his first few days on the sets of both ‘American Satan’ and ‘Paradise City’ where apparently the cast and crew praised his authentic performance of the live concert scenes, unknowing that he and another co-star Ben Bruce (guitarist for the band Asking Alexandria) were actual well-known musicians outside of the show. Additional musicians such as Slipknot’s Sid Wilson and Lamb of God’s Randy Blythe can be seen testing their acting chops on the show.

Connections between the cast

The ridiculously star-studded cast of ‘Paradise City’ is one of many reasons why viewers will want to tune in. There truly is something (and someone) in this show for all viewers. If you aren’t familiar with any of the musicians noted above, you may recognize social media stars Brittany Furlan and Amanda Steele in their six episodes of the series. Furlan is a famous internet personality and comedian who got her start on the video-sharing app Vine. Since graduating from digital content creation, she continues to make appearances on the small and big screen; while Steele, a budding actress and content creator from Southern California started her career making videos on YouTube and has since starred in several new media shows, modeled for Vogue and Nylon magazine and has created her own clothing line.

While digital stars fill the screen of ‘Paradise City’ so do former Disney stars Cameron Boyce (Jessie) and BooBoo Stewart. These two were no strangers to playing opposite each other as they had also previously worked on Disney Channel’s ‘Descendants’ franchise. ‘Paradise City’ was Boyce’s final project before he passed away in 2019. Stewart reported to Entertainment Weekly that Boyce’s performance was fantastic, and shows a side of the late actor that not many got to see while continuing to boast that Boyce was one of the most talented people he had ever met.

The shared credits don’t stop there as another former Disney actress Bella Thorne (Shake it Up) shares the small screen with former co-star Perrey Reeves. The two worked beside each other on Thorne’s Freeform show ‘Famous in Love’ which ran for two seasons. In ‘Paradise City’, Thorne’s impeccable performance as a punk rock guitarist is an excellent proof that she has successfully graduated from Disney star to a respectably young, raw actress.

Those looking for a new series equipped with juicy drama, whirl-winded romances, and rock and roll music should certainly give ‘Paradise City’ a watch. Ash Avildsen effortlessly created a world that while I, nor many people wouldn’t desire to live in, it certainly is enticing to watch unfold before our eyes.