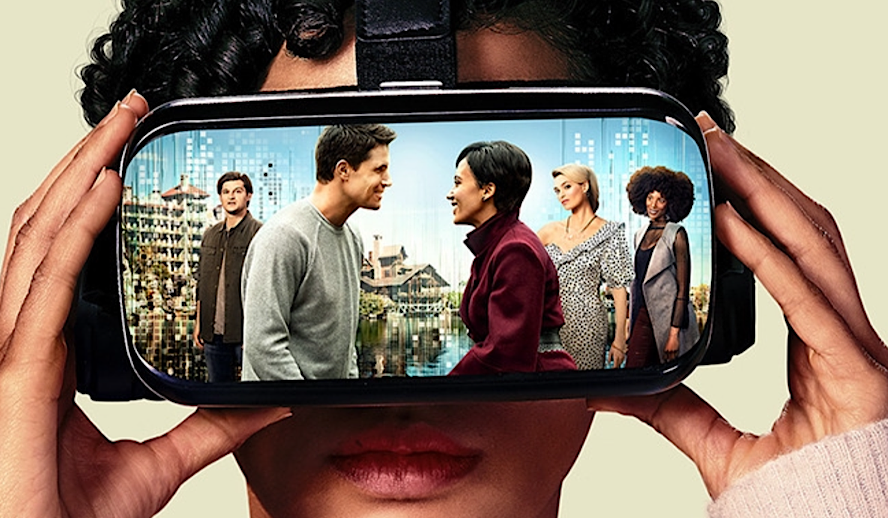 “What is the reward for a life well-lived, and upload well planned for? The most perfect, natural beauty that man could design” is the first line of dialogue of this show, encompassing the premise of the series. Upload’s pilot episode starts out with an infomercial for a company named Horizon’s virtual immortalizing utopia, in which they advertise a real-life heaven where anyone can live digitally for all of the time. The audience is then introduced to one of the main characters, Nora, played by Pitch Perfect 3’s Andy Allo, who silently bonds with a stranger on a subway while watching Adam Sandler sing in the movie 50 First Dates on her phone, a silent but sweet moment between two strangers. Nora then arrives at her job, which is at Horizon. The office resembles any modern office at a company in Silicon Valley. The exposition for the entire series is teased when Nora uploads a random person, who’s unsure of where they are, and gently begins their tour of, in Nora’s words, “Upload.”

Then the protagonist, Nathan, played by The DUFF’s Robbie Amell, is introduced. He’s a rich, pretentious, attractive young man that lives life on the edge and races his futuristic car on an LA highway using a Gamecube remote. He gets pulled over, and the police are not there to stop him in person, but rather, are on iPad looking devices that are carried by drones. Nathan’s car has A.I. that’s a bit more personal and smarter than Siri and cracks a few quips before its big event. It’s a clear technological future, but not far off from the current, especially with changes being made due to the COVID-19 pandemic. The world-building in the show is excellent, and all the details of the world and characters are shown are fascinating, appropriately placed, and necessary to the overall story. Nathan’s vanity is a recurring issue and one that stands out as his most defining feature, setting in motion a coming-of-age story.

There’s a pseudo romance introduced between Nathan and Ingrid, played by Briarpatch’s Allegra Edwards. Before Ingrid is fully introduced, Nathan has a conversation with his best friend and business partner, Jamie, played by Nurses Jordan Johnson-Hinds that conveys Nathan’s needs to stop leading her on, and the dire consequences that’ll come with not ending things with her right away. Nathan expresses subtextually that he’s only into Ingrid for her looks, feeding into Nathan’s vanity, and stays in a relationship with her purely for their physical relationship. She is clearly more interested in how he and his family perceive her personality, to which he is almost unresponsive to. This shallowness that’s a part of Nathan’s personality, of course, has humorously ludicrous repercussions.

The Clash Between a Tech Utopia or Dystopia in Upload

The afterlife and its connection to the digital world, a cloud almost, is what encompasses the entirety of the show, and the exposition is laid out at Nathan’s family thanksgiving. Ingrid mentions to the family that her grandma is in heaven. “Which one?” asks Nathan’s mom, “Lakeview” answered Ingrid, signaling a callback and future significance. The digital utopia that Lakeview presents itself is looked at by society as the key to a wonderful afterlife, and a true substitute for heaven, the closest humans could come up with. “We’re a Horizon family, unlimited data,” Ingrid says, reinforcing the notion that families even see it as a true gateway to heaven, and a way for them to be together forever.

Nathan’s dad comically says that Lakeview is too expensive and that he’s going to be stored on a SIM card, showing there are even cheaper alternatives to this digital heaven. This foreshadows the fate of Nathan, who gets into a car crash because of his lack of attention to his vehicle’s autonomous driving setting. He then dies, and the audience is brought back to a setting that’s reminiscent of the opening scene with Nora, who leads his upload, to which Nathan reluctantly agreed to moments before his death.

In some sort of digital beheading process, Nathan is sucked into a simulation world. Nora, who tells Nathan to refer to her as “your angel” is bothered by Nathan’s overt vanity and gives him a silly flaw with his hair sticking out, something he can’t fix. “This is the first day of the rest of your afterlife” Nora, starting Nathan’s journey. Nora’s coworker, Aleesha, played by American Koko’s Zainab Johnson, since the beginning, has brought attention to Nathan’s handsome appearance and has subliminally pushed for Nora to flirt with him, appraising her for getting a client with such remarkable looks. After he has a grieving period, Nathan begins to love the feeling of a shower, and like all the freedoms and variety of the afterlife. “I completely feel alive. The programming depth is insane!” Nathan comments to his neighbors. He reveals he’s a programmer but doesn’t remember what he programmed, a callback to the memory loss with Nora earlier in the episode. The world is commercialized, and there are even Orbit gum salespeople.

Nora’s personal life is shown, and she tries to get her dad to sign up for Horizon. He coughs aggressively, revealing that he’s getting close to death, and she’s trying to keep a way connected to him. He is obviously religious, and reveals he wants to join their mother in heaven – the religious one, which Nora responds with “you don’t still believe in that old stuff, do you?” Nathan meets another comical character similar to him, who wakes up late with him and misses the elaborate delicious looking breakfast. Luke, played by The Angry Birds Movie’s Kevin Bigley, an Iran war vet who died from a “sui-scan,” shows Nathan a portal that leads to the real-life, but kills anyone who tries to enter it, referring to as the way “idiots try to go back to Earth.”

After a series of annoyances and troubles, Nathan finds himself marching towards it to take the risk of going back to Earth or actually dying. Nora, at the last minute, saves him by expressing Horizon is in the business of keeping consciousness alive, and how life is the most beautiful gift ever, now humans have learned to perpetuate it. She talks him out of suicide, and walks him back to headquarters. The show ends on a cliffhanger, with a reveal of Nathan’s previous memories from his file being deleted by someone that’s not shown.

This show is hilarious from start to finish, with engaging characters and a gripping premise. Greg Daniels, who created and wrote some of the greatest television comedies, such as The Office, Parks and Recreation, and King of the Hill, shows some of his most clever abilities as a writer and show creator in this series. With this engaging concept, and even foretelling futuristic elements included, it makes for a lot of opportunities for hilarious comedy. The characters Daniels created are the kind of characters general audiences would love to see in these situations, and even rings similarly to the vastly popular hit show The Good Place. Greg Daniels is a historic, and legendary icon in sitcom comedy, and has continuously made triumphant positive impacts for almost three decades. Upload’s brilliance reflects Daniels’ near lifetime of experience and talent, delivering continuous entertainment and laughter. Upload can be viewed on Amazon Prime.