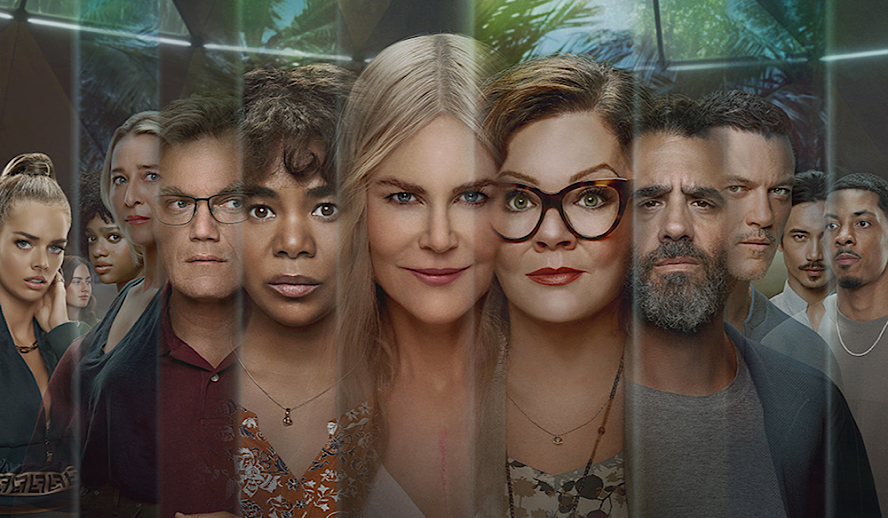 Over the past few years, television viewers have had their attention captured by shows that build mystery around wealthy people and their problems. ‘Big Little Lies’ started it when the women of Monterey first crossed our screens, again when ‘The Undoing’ had everyone guessing whodunnit last fall, and most recently with everyone trying to guess who was leaving in a coffin from the luxury Hawaiian resort in ‘The White Lotus’. The trend continues, this time on Hulu, with ‘Nine Perfect Strangers’, a show which does have a perfect cast but seems to beg the question of what the show wants to be.

‘Nine Perfect Strangers’ is an adaptation of the Liane Moriarty novel of the same name and follows a group of nine people attending a wellness retreat who were selected to be part of this particular session together. The retreat is run by the mysterious Russian named Masha (played by the patron saint of Liane Moriarty adaptations Nicole Kidman) and her assistants Yao (Manny Jacinto) and Delilah (Tiffany Boone).

The people in attendance consist of a romance author struggling with her love life and her career (Melissa McCarthy), the Marconi family who are trying to recover from the death of their son and brother three years before (Michael Shannon, Asher Keddie, and Grace Van Patten), a couple who is trying to find their footing with each other (Samara Weaving and Melvin Gregg), a former football player struggling with drug addiction (Bobby Cannavale), a single mom trying to improve her self-worth (Regina Hall), and a man who is having commitment problems but also seems to have an ulterior motive to being at the retreat (Luke Evans). This group makes up the titular nine perfect strangers and are all trying to figure out each other, themselves, and what is really going on at the Tranquillum House.

The first episode introduces us to the cast of characters and why they are going to Tranquillum House; it sets up who we are dealing with and how they are likely to conflict with each other, plus the mystery surrounding Masha and her operation. Episode two furthers the mystery of Tranquillum House and what the motives of those running the place are. Episode three begins to connect the nine together more through a series of physical challenges that prove to have some mental ramifications.

As I mentioned before, ‘Nine Perfect Strangers’ is just one in a long line of recent shows that take the traumas and problems of wealthy people and placing them into a setting of mystery, namely mysteries surrounding death. The show premiered less than a week after the finale of ‘The White Lotus’ and many of the beats and character tropes feel very familiar to the HBO Max hit show and the shows of this kind to come before it. While this does have some differences- namely the fact that the premise of ‘Nine Perfect Strangers’ is about people going to a place to actually work through their traumas and problems instead of keeping them bottled up – a lot of it feels like more of the same.

The performances are outstanding in ‘Nine Perfect Strangers’. Every actor does feel like a great fit for their character (although, like most of Nicole Kidman’s other television roles, I am confused as to what accent it is exactly that she is trying to do) and they all have excellent chemistry with each other. The material these actors have been given is pretty good even though it is rather vague a lot of the time with the direction the plot is going, but it really just feels like the show has come into the game too late. Especially considering how it feels so similar to the other Moriarty television adaptation and some shows its stars have been a part of, it just feels like the show is trying to hop onto a trend that is starting to wear out.

I am not saying that ‘Nine Perfect Strangers’ is not worth watching- in fact, I am looking forward to seeing where the show is going to go and watching some of the best actors of today chew their scenes in the best way possible that this show allows them to do. But I do think that this concept, tone, and the tropes involved are just wearing out. I find myself getting a bit bored by these shows now; there has simply been too much of the same and maybe it is time for a break from these kinds of stories.

I cannot stress what a fantastic cast ‘Nine Perfect Strangers’ has. Melissa McCarthy has really blossomed with her dramatic work and this show is no different, same goes for Regina Hall. Michael Shannon is wonderful as the most out-there and big character of this band of strangers; Luke Evans is finally getting a good chance for a wider audience to see how fantastic he is. The show has the potential to be excellent and shine, the only problem is how similar it is to other shows that have come out recently.

Especially for people who have recently watched ‘The White Lotus’, ‘Nine Perfect Strangers’ hits a lot of similar notes but with less of a satirical nature. I hope that it is able to find a way to differentiate itself from the pack and stand out because it would be a shame for such an exciting group of performers to get overshadowed by their predecessors. If you have Hulu, this is a show worth watching if you want a good mystery and a good drama. ‘Nine Perfect Strangers’ is very good, it is just a premise and vibe that we are no stranger to anymore.

And seriously, what is going on with Nicole Kidman’s accent?!

The first three episodes of ‘Nine Perfect Strangers’ are streaming now on Hulu and new episodes come out every Wednesday.