‘Bill and Ted Face the Music’: A Pitch-Perfect Comedy About Going Out on a High Note 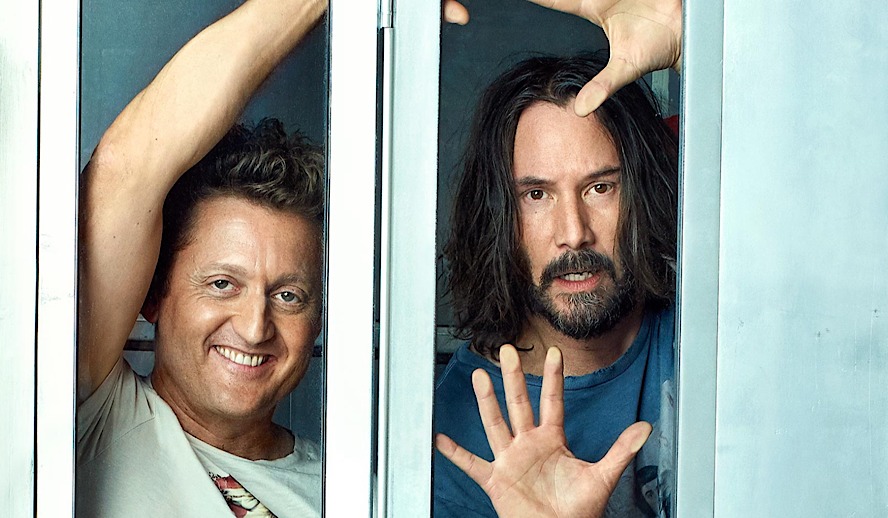 Who could have anticipated that, in 2020, one of the biggest film releases would be a third Bill & Ted movie? Coming nearly 30 years after its last installment (1991’s Bill & Ted’s Bogus Journey), the film struggled through development hell for ten years. During that time, its stars settled into new phases of their careers – Alex Winter became a documentarian, and Keanu Reeves took a deep dive into martial arts. The film might have never seen the light of day, had it not received boosts from fan-led internet campaigns and the phenomenal success of the John Wick franchise.

Quite frankly, John Wick was more than just a hit–it gave Keanu Reeves a career renaissance, paved the way to him becoming a videogame character (he was a Fortnite skin before it was cool), and spawned a franchise with multiple sequels and spinoffs in development. Before John Wick, Keanu Reeves might not have been successful enough to star in the much-belated sequel to a cult comedy from the late eighties. After John Wick, he might have been too successful.

“Be Excellent to Each Other.”

Despite all the time-travel wonkery, the Bill & Ted movies are really about the timeless quality of friendship, and Bill & Ted Face the Music is no exception to the rule. In fact, it takes the rule to the nth degree. Bill & Ted’s wives (who happen to be medieval English princesses, born in 1408 and 1410, respectively) are best friends. Their daughters (Bill’s daughter Thea, and Ted’s daughter Billie, because they naturally named their daughters after each other) are best friends. Even Ted’s police captain father and his police officer brother are best friends, despite the fact that Ted’s brother Deacon (Beck Bennett) is now married to Missy. (She used to be married to Ted’s dad after she got divorced from Bill’s dad. It’s a semi-incestuous yet hilarious gag that Beck Bennett gets a lot of mileage out of, and is a sly send-up of that time in Back to the Future when Marty McFly kissed his own mom.) Of course, the McFly relationships were constantly in flux, but the Preston/Logan bonds are a known constant. It’s perhaps the most charming feature of this film, seeing two family units that absolutely and unfailingly connect.

Other films might tear the longstanding bonds of friendship and family asunder for additional conflict, but in Bill & Ted, the conflict is purely an external force. When we meet Bill & Ted in 2020, it is after a lifetime of companionship which has seen them become intergalactic heroes due to their absolute advocacy of love and friendship. Love and friendship, the film suggests, is the armor that protects us against whatever the universe throws at us, be it temporal anomalies, the vagaries of the Billboard charts, or a killer robot from the future named Dennis (played by Anthony Carrigan–think Terminator, but utterly incompetent).

If this seems a bit fantastical, it is certainly appropriate for a Keanu Reeves project. As one of the most memetic figures on the Internet, the actor is most accustomed to being one of the avatars of our collective psyche. Once criticized for his flat performances, Keanu has turned this supposed flaw into his defining feature. Now, his quixotic, zen-like cool is the visage so many turn to for personal expression and greater self-understanding. With no disrespect to Alex Winter, Keanu Reeves is the beating heart that truly makes Bill & Ted Face the Music work. I’d venture to say that Alex Winter agrees, considering how often the film finds him gazing at Keanu the way Winona Ryder did while promoting Destination Wedding.

Time Folds in On Itself

This is an astoundingly reflexive and self-referential film. So many belated pop-culture sequels are, but many do it in a cynical, cash-grab way. Bill & Ted is self-referential without the cynicism. In a year full of movie delays and empty multiplexes due to a global pandemic, Bill & Ted is a film about impending disaster and the power of art to avert it. It’s also a film starring two former teen heart heartthrobs that is about two musicians growing up under immense pressure and a global spotlight. It’s a film that took ten years to produce that is about a long-delayed artistic revelation. And it’s a film about passing the torch that happens to costar two up-and-coming doppelgangers of its leads. Samara Weaving, the niece of Keanu’s Matrix co-star Hugo Weaving, plays Bill’s daughter, while Brigette Lundy-Paine does an absolutely stellar mini Keanu impression as the daughter of Ted.

If any of this sounds headache-inducing, it isn’t, and here’s why: Bill & Ted Face the Music is self-referential, but it isn’t self-reverential. Its stars are middle-aged men, and they look like it. Despite being time-traveling world class musicians, they live in modest homes and drive economy cars. When agents from the future (led by a superb Kristen Schaal) come to ask them why they haven’t yet fulfilled the prophecy and written the song to unite the world, they are as disappointed as anyone. Facing an apocalyptic countdown, Bill and Ted travel forward in time and face their own fates (seeing the increasingly prosthetic Bills and Teds of the future is jaw-droppingly funny).

Meanwhile their daughters, who are talented instrumentalists themselves, go back in time to recruit history’s greatest musicians to bail them out. Among the all-stars is rapper/producer/cult comedy phenom Kid Cudi, who can now add ‘quantum physicist’ to his list of talents. Eventually, they even have to confront Death himself (he used to play bass in their band, Wyld Stallyns, before they broke up). It’s a silly, madcap adventure, but the message the film presents is profound:

To find answers to the questions deep within us, we cannot rely too heavily on the past or the future. We have to have faith in the present, faith in ourselves, faith in the ones we love, and above all, we have to party on.