The Brilliant Class Satire of HBO Max’s ‘The White Lotus’ 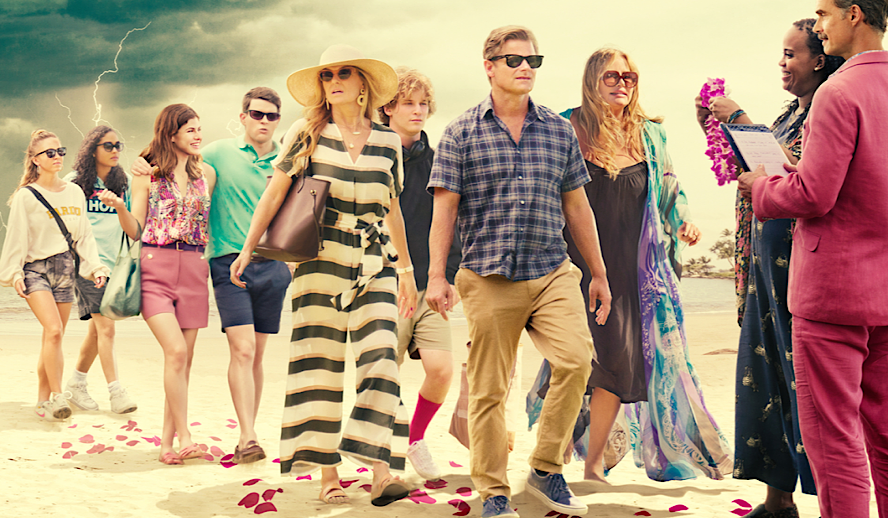 ‘The White Lotus’ opens with a boat of three groups of rich people on their way to vacation. The typical upper-class family consists of the girl boss CFO Mom (Connie Britton), emasculated father (Steve Zahn), tech-addicted son (Fred Hechinger), and fake woke daughter (Sydney Sweeny) who brings her friend (Brittany O’Grady) along. Then there is the newlywed couple, the trust fund privileged Shane (Jack Lacy), and his wife, Rachel (Alexandra Daddario), a writer who had to work her whole life to make ends meet. Lastly there is Tanya (Jennifer Coolidge), a lonely free spirit who is planning on dumping her mother’s ashes.

This assortment of rich people is soon greeted by the employees of the fictional White Lotus resorts, the people who will be serving their every wish. “Wave like you mean it”, the resort’s manager (Murray Bartlett) tells his employees. The two groups, the working class servers, and the privileged guests, soon meet face to face. This is how showrunner Mike White introduces us to the class dynamic in the world of ‘The White Lotus’.

‘The White Lotus’ – Serving the Wealthy on their Vacations

One of the most captivating conflicts in the first three episodes of ‘the White Lotus’ surprisingly revolves around the character of Shane being unhappy he isn’t booked in the honeymoon suite like his mother had ordered. Shane’s rudeness and obsession with this simple mistake are what sets off Rachel’s cold feet about her marriage to him, that he is unappreciative of what he has and what she has always dreamt of. Did she just marry a privileged baby? Shane’s rudeness towards Bartlett’s Armond is also what sets off a domino effect of Armond sabotaging Shane’s vacation, hilariously booking him and Rachel a boat ride with the grieving Tanya for their romantic date in the series’ third episode.

Shane is unable to enjoy his vacation because of his insistence on being treated like a “valued guest” is what ends up not only ruining his vacation but is what ends up exposing the real him, warts and all. Vacations bring out the worst in the rich because they expect to be coddled but once they are faced with an inconvenience, it sets them off. This storyline also exposes the mistreatment service workers face, the constant complaints, and how this leads employees to subtly sabotage those who have wronged them because in reality, on these vacations the servers have the power.

The character of Armond, with his fake smile and neon-bright Hawaiin shirt, is the epitome of the tired employee. While he is technically the boss, he doesn’t partake in any of the joys the resort has to offer because even the slightest moment he unwinds, something will fall apart. He must smile through the chaos or else. He isn’t perfect though, one can argue that he is just as unlikeable due to how he treats his employees, especially his pregnant trainee (Jolene Purdy).

Armond realizes that the stress of work has turned him into a monster though, no different than the customers who constantly talk down to him, thus leading him to break his sobriety. The abuse Armond gives and takes at work, turning him into just as much of a flawed person as the ones he serves, is the sad reality of working a service job. Taking abuse from the customers and giving it right back to your undeserving employees just because this job, despite the benefits, has hardened you.

The Sad Inner Lives of the Rich and Famous

Despite these characters’ statuses and net worths, they aren’t happy. Steve Zahn’s Mark is worried about not being a good father, Connie Britton’s Nicole can’t relate to her own kids, and Jennifer Coolidge’s Tanya is a lonely alcoholic. These characters all seek vacations for the same reasons we all do, not just for the Instagram posts or the free buffet, but so we can feel refreshed, ready to start anew. These people cannot even be happy on their vacations though, with Nicole rearranging the room every three seconds because of Feng Sui and Tanya’s only friend becoming a masseuse of the hotel, Belinda (Natasha Rothwell), who is hoping Tanya helps her start her own business.

While these flawed characters are perfect satires of the modern one percent, with Nicole’s ‘girl boss feminism’ and Mark’s fears about his emasculation, they aren’t just parody level caricatures. The actors, all typically known for character work, perform each character with such heart and realism. Zahn and Coolidge especially perform their characters with pain that feels truly real and earned. Zahn’s manic energy is perfect for the pathetic Mark, truly shining in the third episode where he becomes the “drunk talkative dad” that you avoid at the bar. Coolidge, on the other hand, usually known for more flamboyant roles, shines as the sad and space cadet like Tanya.

With Tanya, Coolidge gets the chance to show her emotional range. When she is unable to finish spreading her mother’s ashes, crying that it’s “too early”, the audience feels the weight of her grief. Her comedic timing is just as strong as her character’s emotional complexity. From her choice of movements, like drunkenly chucking her mother’s urn on her nightstand, to quotable lines like “I know, I have to pee but I’m not, I’m holding it”, proves that Coolidge is more than a character actress, she has always been a star.

The characters of ‘the White Lotus’ all share a fake performance of being happy. From the newlywed couple behaving as if they are enjoying their honeymoon phase despite Shane’s unhappiness with the vacation and Rachel’s unhappiness with Shane to Nicole and Mark’s family all having a genuine disdain for one another, no one is happy. Even on a luxurious vacation that the average person couldn’t even dream of affording, these characters are not happy. Nothing is good enough for them and they are plagued with self-doubt. Despite their privilege giving them all the opportunities the resort’s employees wish they could have, they are equally unhappy but for different reasons.

In just the first three episodes alone, ‘the White Lotus’ has proved itself to be one of this year’s smartest television shows. While the series would excel more with more screen time of the White Lotus staff, it is still too early to tell given the series has only aired the first three of six episodes. There is still so much that can happen, especially given the series opens with a future death similar to other successful miniseries like ‘Big Little Lies’ and ‘Sharp Objects’. While this opening scene will keep you at the edge of your seat, the series’ sharp satire, fantastic cinematography, and profound performances will keep you glued to your seat.

‘The White Lotus’ is available to stream on HBO Max.