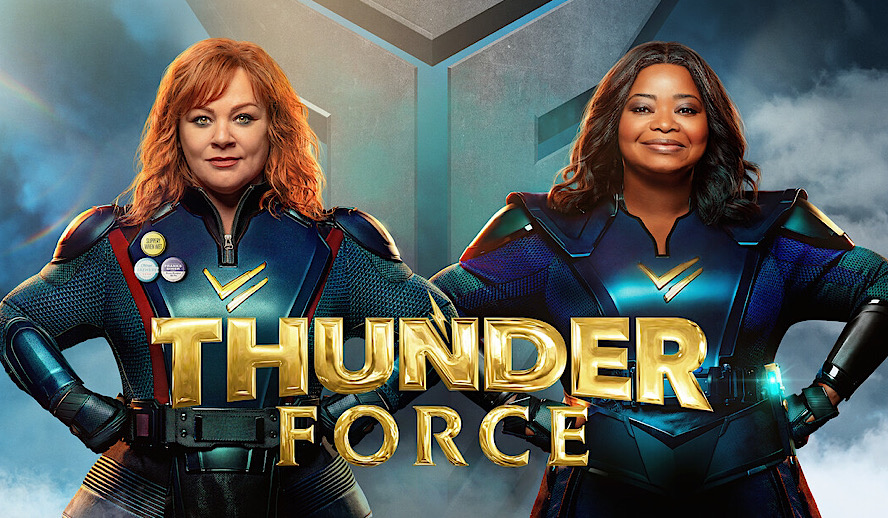 In Defense of the Mindless Comedy

‘Thunder Force’ starring Melissa McCarthy and Octavia Spencer was released on Netflix on April 9th, 2021. The film follows a scientist and her down-on-her-luck, ex-best friend as they use their superpowers to fight against the reign of miscreants, or supervillains, in their hometown of Chicago. ‘Thunder Force’ has an absolutely stacked cast that includes Jason Bateman, Bobby Cannavale, and Ben Falcone. The cast represents the best parts of the film; with all these legendary comedy stars, there’s no way the film wouldn’t be funny. Though it’s not perfect in any sense, it has a lot of humorous moments and a fun narrative at its core, which ultimately makes for a family-friendly, entertaining watch.

Firstly, I’d like to talk about Melissa McCarthy and Octavia Spencer. These two stars, though unconventionally put together in this film, are wonderful on screen. They have genuine chemistry, feeding off of each other in every scene they’re in. Moreover, it’s nice to see Melissa McCarthy in a leading role as she began her career with supporting roles, like Megan in ‘Bridesmaids’, whose only job was to provide comedic relief. McCarthy is so much more than the butt-of-a-joke and she is magnetic to watch in a lead role!

Though McCarthy typically stars in comedies, Octavia Spencer tends to gravitate towards more serious roles, like Dorothy in ‘Hidden Figures’, so it was interesting to see her in a role outside of her comfort zone. She did, however, play a dorky scientist who has to learn the hard way how to have fun on the job, but she still seemed to have a good time letting loose for once. Both women together were an absolute knock-out; they played off of each other perfectly, almost a little too perfectly according to one scene where they get mistaken for a couple, but the rest of the film was entertaining to watch regardless.

Moreover, with recent years bringing Marvel movies’ domination of the box office, there’s not a ton of diversity in the genre of superhero films. We tend to see the same incredibly-toned, muscular men and women on screen saving our cities. These superheroes represent an idealistic interpretation of ‘heroes’, people who are physically capable of protecting the general public. Oftentimes, these heroes are also men which enforce the stereotype that only men can be capable of proper protection.

‘Thunder Force’ challenges not only the representation of female superheroes on screen but also Marvel’s singular representation of what a heroic body can look like. McCarthy and Spencer are the singular superheroes of the film, progressing the genre forward and crushing misconceptions about what a hero needs to be. Their casting reinforces one of the film’s main messages: with a little science and training, anyone can be a superhero. On top of this, I’m not going to lie to you, it was fun to watch McCarthy and Spencer battling it out on screen.

They kicked some bad-guy butt with their super strength and invisibility! McCarthy and Spencer are probably the most surprising choices to play superheroes as they are women who are older (McCarthy is fifty-one) and not necessarily representative of the physical stereotypes that we assign to superheroes, which makes this movie all the more important to watch. It is so refreshing to see diversity on screen and especially in the superhero genre, a genre that’s typically indicative of an actor who has had to train intensely for multiple months to prepare their body physically for the role.

Now let’s talk about Jason Bateman for a second, because he really brings it on screen. He plays a miscreant with crab arms, though it’s rather unclear what his actual powers are, the running gag of his performance is delightful to watch. He develops an instant connection with McCarthy after a battle in a convenience store where the two are on opposing sides. After a hilarious night out at dinner, they inevitably fall for each other.

Between the jokes about Old Bay seasoning and a rather uncomfortable encounter with a waiter who offers the two lovebirds a seafood platter, Bateman takes the crab-arms gag and runs with it. McCarthy and Bateman’s unlikely romance is one of the highlights of this action-comedy film while also serving a narrative purpose as it allows the Thunder Force to succeed in their takedown of the miscreants. Bateman is stellar on-screen, his sarcastic commentary and dry humor are truly a colorful addition to this film.

Now that I’ve hyped up the best parts of the film, I want to discuss some of my criticisms. ‘Thunder Force’ is painfully predictable; I guessed how the entire film would play out within the first thirty minutes. Spoiler alert: I was right about each and every so-called plot twist, including an evil politician and a double-crossing assistant. But, to play devil’s advocate, the predictable nature of this action-comedy actually didn’t take away from my enjoyment in watching it. The humor of this film lies in the moments of improvisation between the comedic geniuses who star in it, not the plot. There’s a whole running gag where Melissa McCarthy’s character, Lydia, cannot get enough raw chicken after her superhero transformation which never ceases to gross me out in the best possible way.

Closing Thoughts: There’s a Time and a Place for ‘Thunder Force’

‘Thunder Force’ knows what it is: an action-comedy that isn’t trying to break any boundaries with its narrative. It is predictable, albeit humorous in its portrayal of superheroes and villains while maintaining the professional feel of a big-budget comedy. There’s plenty of CGI, fast-paced fight scenes, and funny one-liners to keep you entertained on a Saturday night. It’s the type of film that you don’t have to really pay attention to in order to understand the plot; something casual to throw on while hanging out with friends or family. And, to put it simply, it doesn’t need to be anything more than that.

There’s a time and place for mindless entertainment, especially when you need a break from the harsh things happening in the real world. ‘Thunder Force’ isn’t going to win an Oscar anytime soon, but that doesn’t mean you can’t enjoy it with the right people. I’ll leave you with my sentiments: this is not a movie to go out of your way to watch, in any sense, but if you’re looking to throw something casual on for background atmosphere, it’s the perfect choice.

Directed and Written By: Ben Falcone