Shakespeare in Film: The Great Playwright’s Influence on Movies 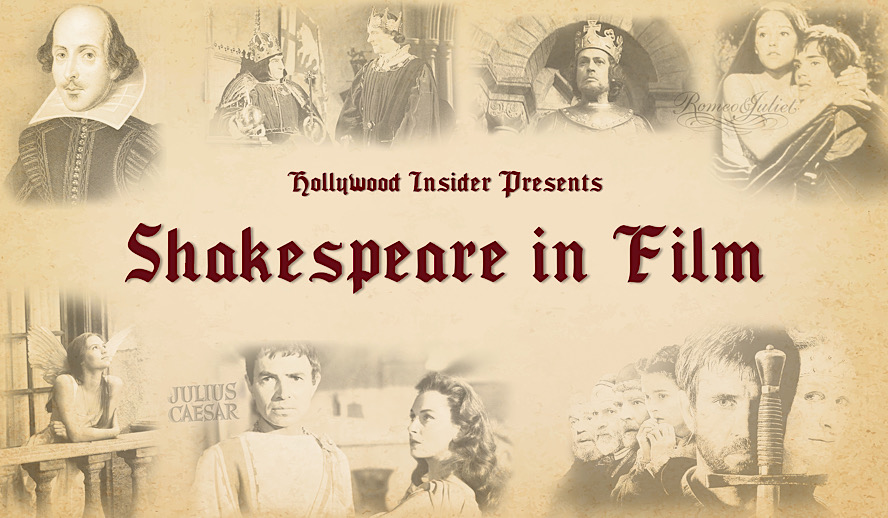 William Shakespeare was an English playwright and dramatist that lived during the 16th and 17th centuries. During this Renaissance era, Shakespeare was an essential member of the King’s Men company of theatrical players. He and his business partners built their own theater in 1599, the famous Globe Theater, where they performed the plays penned by Shakespeare.

Hundreds of years later, Shakespeare’s plays are still read and performed. In 2014, Guinness World Records published an article honoring Shakespeare on his 450th anniversary recounting ten world records related to the writer. He remains the world’s best-selling playwright, with sales of his works believed to be in excess of four billion copies since his death. Film, in particular, has a rich history of adapting his works and taking inspiration from his plays. Over four hundred feature films and TV-movie versions are adapted from his works.

Laurence Olivier starred in, directed, and produced a handful of Shakespeare adaptations. ‘Richard III’ did not receive as many Oscar nominations as his other Shakespeare films, but it holds up to a modern viewing and is arguably his best because of this. ‘Richard III’ tells Richard’s story as he conspires to take the throne from his brother, King Edward IV. The British Film Institute states that this film may have done more to popularize Shakespeare than any other work.

The British-Italian romantic tragedy was up for four Oscars in 1969, including Best Picture and Best Director, and it won two Oscars in the categories of Best Cinematography and Best Costume Design. The film is based on Shakespeare’s play of the same name and tells the story of two lovers from two feuding families. ‘Romeo and Juliet’ is the last Shakespeare film to date that has been nominated for Best Picture.

‘Chimes at Midnight’ focuses on Shakespeare’s recurring character Sir John Falstaff and his relationship with Prince Hal. Hal faces the decision of whether to be loyal to Falstaff or his father, King Henry IV. The film was nominated for the Palme d’Or at Cannes Film Festival and received a nomination at the BAFTA Awards. The nomination was for Orson Welles, who plays Sir John Falstaff, in the category of Best Foreign Actor. Welles also directed the film.

Kenneth Branagh, like Laurence Olivier, helmed and starred in many Shakespeare adaptations. There are many renditions of Hamlet in film, but Branagh’s version was the first unabridged adaptation with a runtime coming in at just over four hours. The film recounts the story of Hamlet, Prince of Denmark, as he navigates the turmoil in the wake of his father’s death after returning home and finding his mother married to his father’s murderer, his uncle.

‘Julius Caesar’ is another Shakespeare adaptation that was nominated for Best Picture. The film tells the story of a mighty Julius Caesar in Rome as a group of his inner circle plots to assassinate him. Marlon Brando, who starred as Mark Antony, received a nomination for Best Actor in a Leading role. Brando won two Oscars for acting and was nominated for another six roles, but his portrayal of Antony is one of his best performances. This version of the play is also one of the best adaptations of Julius Caesar to date.

‘West Side Story’ (Romeo and Juliet)

Steven Spielberg is remaking the 1961 classic and has a hard act to follow even with his pedigree as a filmmaker. The original won 10 Oscars, including Best Picture and Best Director. The only category it was nominated for but did not win was Best Writing – Screenplay Based on Material from Another Medium. ‘West Side Story’ tells the story of two young lovers from rival gangs in New York. The roots of the story are in Shakespeare’s Romeo and Juliet.

‘My Own Private Idaho’ (Henry IV and Henry V)

‘My Own Private Idaho’ was directed and scripted by Gus Van Sant based on Shakespeare’s Henry IV and Henry V. River Phoenix, in one of his last roles, starred alongside Keanu Reeves. The two young actors portrayed two street hustlers in Portland, Oregon, as they navigated a journey of self-discovery while stumbling along the way. The film is an oddball indie and is an excellent example of a creative adaptation and sublime acting.

Ralph Fiennes’s directorial debut tells the story of a banished hero of Rome who allies with a sworn enemy to take revenge on the city. The film stars Fiennes and Gerard Butler and is a modern telling of a lesser-known Shakespearean play adapted by John Logan.

’10 Things I Hate About You’ (The Taming of the Shrew)

‘10 Things I Hate About You’ has a stellar ensemble cast including Heath Ledger, Julia Stiles, Joseph Gordon-Levitt, Gabrielle Union, and Allison Janney. The film is a modern adaptation of Shakespeare’s The Taming of the Shrew and follows a younger sister who cannot go out on a date until her ill-tempered older sister does. This romantic comedy delivers depth as well as many laughs. It is a fun addition to this list.

While not technically a modern take on Shakespeare, ‘Ran’ gets in because it was adapted in a non-traditional way. Akira Kurosawa directed and wrote the film based on Shakespeare’s King Lear. The story is set in medieval Japan and follows an elderly warlord and the transition of his empire to his three sons. The transferral of power causes the sons to turn on each other and their father. Kurosawa delved into the realm of Shakespeare in previous movies, but this is one of his best. It is also one of his last films. He received an Oscar nomination for Best Director in recognition of his work on this brilliant film.

‘Much Ado About Nothing’

Shakespeare’s influence on film has spanned the entire history of the medium. He will continue to be an inspiration for stories as long as they are being told. Wikipedia has a list that references Guinness’s mention of over 400 film and TV versions of Shakespeare’s plays. Our lists above are just a taste of the many great films adapted from his works.

There will undoubtedly be great adaptations that slipped through the cracks. Hopefully, the films listed in this article give a solid accounting of Shakespeare adapted works and provide readers with a good jumping-off point for discovering the many films based on his plays.

What is your favorite Shakespeare adaptation?