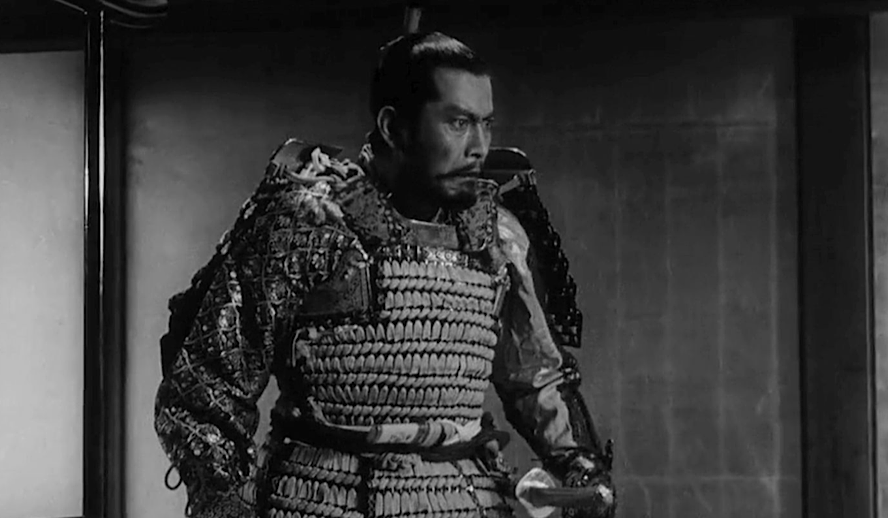 ‘Throne Of Blood’ is the first of Akira Kurosawa’s two Shakespeare adaptations (the second being ‘Ran’, an excellent adaptation of ‘King Lear’) set in feudal Japan. It is an exciting take on ‘Macbeth’ that stars Toshirô Mifune as Washizu, a warrior coerced by his wife (Isuzu Yamada) into usurping his kingdom following a life-changing prophecy. What ensues is a bloody, supernaturally-infused descent into darkness. The film is clearly worth discussing as a direct adaptation of Shakespeare’s immortal text, but it is notable for being its own entity.

Performances Worthy Of The Great Characters

Toshirô Mifune is excellent in the lead role. Known for his macho, intensely physical portrayals of samurai fighters in films such as ‘Seven Samurai’, ‘Yojimbo’ and ‘Sanjuro’, Mifune delivers exactly what you would expect as Washizu. This time however his role is harder, as he must convey the madness and evil that we associate with the Macbeth character. It is difficult to take your eyes off him, as is also the case with Lady Washizu, who is excellently portrayed by Izuyu Yamada. Yamada infuses Lady Washizu with a slow, eerie stillness that provides an intriguing contrast to her husband’s more chaotic disposition.

‘Throne Of Blood’’s main strength is the fact that it interprets Shakespeare visually rather than linguistically. Where countless adaptations have struggled to be cinematic as a result of incorporating the text’s difficult language, this Japanese adaptation benefits from the fact that it does not need to adhere to the original English. What this does is that it allows the emotion to come out through the visuals rather than through dialogue – as a result, ‘Throne Of Blood’ is far more cinematic than most Shakespeare adaptations.

Indeed, ‘Throne Of Blood’ is beautifully visceral. It’s a cliché phrase – but every frame Kurosawa curates looks like a painting. The landscapes are clearly lived in – the battles take place on huge, mountainous fields, conveying an enormous sense of scale in the process. It’s easy to buy the “Spider’s Castle” as an actual location – all the other fortresses in the film are astonishingly realistic. Even the meeting rooms are beautiful, intricately created sets. The costumes are wonderfully detailed and similarly authentic-looking. It helps the believability of the story that the film’s locations are so realistically and beautifully presented and that despite being released in 1957, none of its images seem dated.

Most of the film is paced slowly, but Kurasawa demonstrates his ability to stage action with the various battles and horse chases that take place throughout. He applies the same sense of realism to the action as he does to the stationary content; in the final arrow-scene real arrows were fired at Toshirö Mifune to create an authentic portrayal of a man fearing for his life.

‘Throne Of Blood’ builds fairly slowly, but it is largely memorable because of its momentous, brutal finale. ‘Macbeth’’s supernatural leanings are usually downplayed in cinematic adaptations, but ‘Throne Of Blood’ cleverly suggests the presence of a true, magical force within the kingdom (The battle literally involves moving trees). The large amount of extras really sells the epic battle that is about to take place. The final, arrow-drenched massacre is truly impactful – the film suggests violence for the most part but ends in a gloriously gritty bloodbath which delivers on the promise of the film’s title.

Inspired By But Not Chained To The Original Text

Whilst I have been largely discussing ‘Throne Of Blood’ in relation to ‘Macbeth’, it is worth noting that this is a film that diverges enough from the original text to be enjoyable as its own entity. In a way, this is ‘Throne Of Blood’’s greatest strength: it works as a direct adaptation of ‘Macbeth’ as well as a standalone samuraï film. There are notable changes too; the forest is cleverly used as a dark haven for the supernatural wherein the enemy can be lost during combat. The Washizus’ downfall is expanded upon by having Lady Washizu suffer a miscarriage, a clever and sensible elaboration on the source material. Washizu’s actual end is far more brutal than Macbeth’s. These exciting changes help give Kurosawa’s iteration its own identity and grit.

Still, some may find ‘Throne Of Blood’ impenetrable. As a result of the weighty source material, it is certainly more abstract than a straight-up samuraï flick like ‘Yojimbo’. Those unfamiliar with the source material may be especially baffled by the moving woods, witchery, and general complexity.

Additionally, the artistic nature of Kurosawa’s style may test the patience of some. He takes his time creating beautiful, still frames in which the characters move rather than constantly moving to the next story point – in comparison to most modern Cinema this film can certainly be described as being slow-moving, and the language barrier inevitably means that it won’t have had full recognition in English speaking countries. However, for those with a proclivity for World Cinema and an appreciation for this culture-defining text, it won’t be a problem.

‘Throne Of Blood’ is a must-see for those interested in Kurosawa and/or cinematic Shakespeare adaptations. It boasts great performances from its two leads as the classic anti-hero couple. It does what few Shakespeare adaptations have managed to do by conveying the emotion of the text literally rather than verbally. It is a film whose look remains inspirational today to all those seeking insight into filmmaking – it has not aged in the way you would expect a film from 1957 to have done. Though moderate in content for most of the runtime, it ends in an exhilarating, surprisingly brazen massacre that is likely to stay with you. Though clearly an adaptation of ‘Macbeth’, it is certainly possible to enjoy the film with no knowledge in the literature, but rather a love for all things samuraï. ‘Throne Of Blood’ is worth your time.