‘Metal Lords’ on Teen Mental Health and the Nature of Friendship: How Metal Teaches Us Mutual Respect 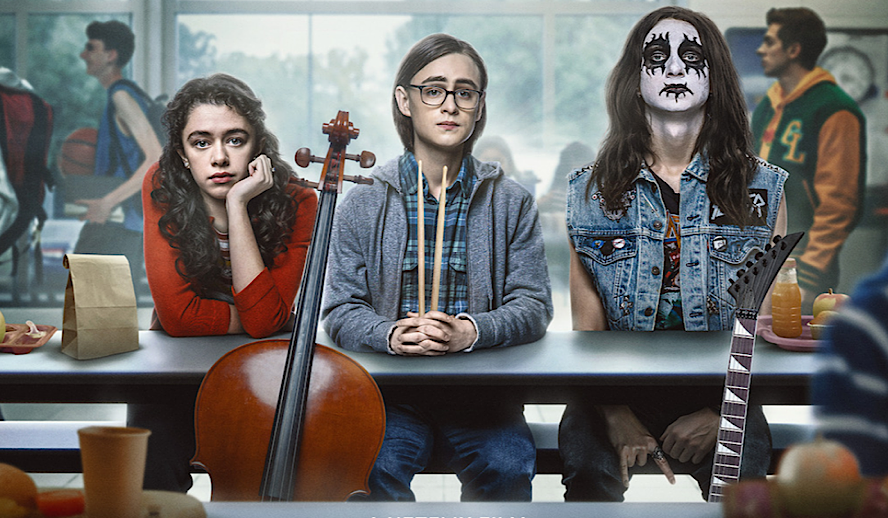 Released April 8th, new and exclusive to Netflix – ‘Metal Lords’! This film follows the stories of high school students Kevin, Hunter, and Emily who have little in common except their ability to put on a show.

Kevin (portrayed by Jaeden Martell), is your standard high school loser archetype. He plays in the school marching band to get out of PE and gets shoved around the halls by the jocks. Hunter (portrayed by Adrian Greensmith) is your standard cinematic understanding of a metal kid. He likes heavy music, his guitar, Dungeons & Dragons, and little else. The character of Emily (portrayed by Isis Hainsworth) is different from our “opposites attract” best friends though. She doesn’t follow a popular cinematic archetype, and instead radiates an energy that is not commonly seen in coming of age films. That energy being the rage that teens start to feel when dealing with guilt.

Follow the story of these ‘Metal Lords’ as they take on their peers, parents, and even their own mental struggles – all to win the Battle of the Bands.

Teen mental health has been a hot topic in entertainment for the past decade and more. However, there aren’t many pieces of media that tackle this topic accurately. The teenage experience in general is a subject matter exceptionally difficult to capture on film, mostly because there aren’t any teenagers sitting in the writer’s room, creating these scripts. Instead, writers try to feed off of the memories of their teenage experiences but often fail due to the fact that their memories are highly distorted by time and fresh perspectives. So how does the film ‘Metal Lords’ do justice to teenage perspectives on mental health? Easy, it shows the guilt that teenagers are made to feel over expressing their mental health struggles.

An exceptional scene in the film depicts Emily detailing her understanding of the impact her mental health struggles have on the lives of those around her. She is comforted by Kevin as she speaks on the sheer amounts of guilt that she feels in association with experiencing her mental health struggles. She says that her life seems perfect, that she does well in school, is loved by her family, and has a good friend she can rely on. Yet something is still “wrong” with her. She tells Kevin that there is an imbalance of chemicals in her brain and that she feels awful that she must subject those in her life to it.

That is what is so unique about this film. Something that is often not talked about when trying to portray stories of teen mental illness is the awareness that teens have about what is happening in their lives. They know that their struggles impact those around them. They understand the good things in their lives. They understand that the future might be different. Those things are not the issue and the behavior that results from untreated or poorly treated mental illness is not a choice. Sure some people are worse at controlling their symptoms than others, and a lot of people experience heavier symptoms than others but it all loops around to the skills that were taught to them. Skills for coping with mental health problems aren’t commonly taught in school, very few families teach their children healthy coping mechanisms, and not everyone can afford a therapist to teach those skills to them. So when it comes to blaming teens for not knowing how to control their emotions, maybe the question should be how come they weren’t taught that control.

This film is a refreshing take on Hollywood’s understanding of the mentally ill teenage experience. Instead of using this screen time to point out how destructive mental illness is to one’s environment and making the mentally ill feel worse in the process, ‘Metal Lords’ actually makes it a point to say – “hey, we know it’s a problem, and we’re trying to fix it, it’s just not easy when your brain is working against you”.

‘Metal Lords’ is painfully accurate to the high school experience. From living in a perpetual state of embarrassment to petty fights that turn into massive conflicts, this movie will make you cringe at certain scenes because you’ll remember what it was like to live those scenes. Second-hand embarrassment is most definitely an appropriate term to describe what it will feel like to watch this movie. If you have been a teenager, then you’ll easily relate to what you see on screen and maybe even realize that at that age you should’ve had more empathy for yourself – because hey, it’s hard being a high schooler!

One of the primary themes of ‘Metal Lords’ is what true friendship is all about. Whether you think it’s all about sticking together with your friends no matter what, or letting them know when they’ve done something wrong so that they can start changes that will make them better people – this film has got you covered on all fronts. Though just before the credits roll, the film lets us know that the true indicator of friendship is mutual respect. This is yet another aspect that makes ‘Metal Lords’ unique. Most media focuses friendship on found family and the “blood runs thicker than water” mindset. However ‘Metal Lords’ allows our characters to maintain their individuality while also respecting each other’s talents and achievements. This friendship is not a competition, rather, it’s a celebration.

Versatile, funny, and accurate – ‘Metal Lords’ is a breath of fresh air for the coming of age genre. Replacing dramatics with action and sob stories with accurate representation, this film is different. The performances given by the actors are accurate to teen maturity levels. The cinematography is bright with no particular focus colors, which makes the scenes easy on the eye while remaining attractive. The music accompanies the shots perfectly. And the atmosphere remains remarkably fun even when the dialogue is serious. Unlike anything released recently, ‘Metal Lords’ is worth a watch!