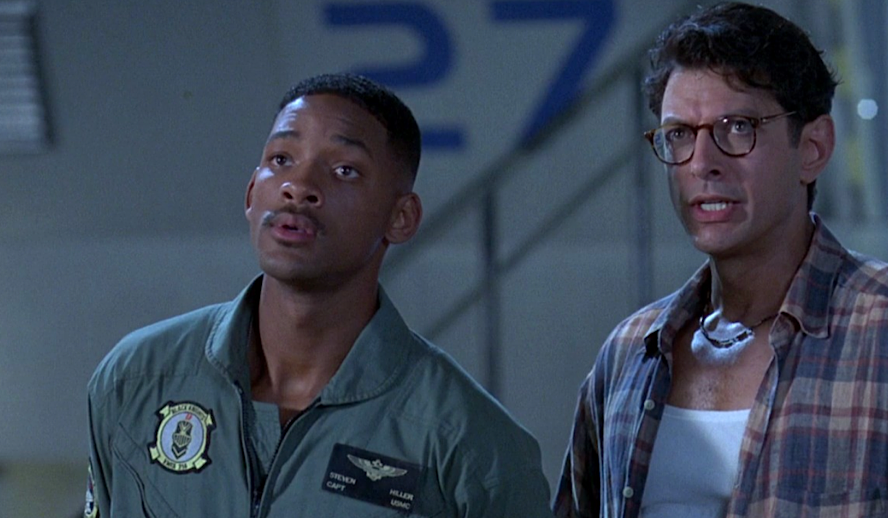 1996 was an interesting summer for movies with the critically acclaimed ‘Fargo’ to the vibrant ‘Space Jam’ to the forgotten Coppola film ‘Jack’. The one film that truly stood out that summer was the aptly named ‘Independence Day’, which followed various characters played by big named stars fighting off an alien invasion. The film, despite receiving mixed reviews, earned a whopping 817.4 million at the box office, being the highest-grossing film of that year. Audiences loved the fun energy of the film, seeing their favorite actors fight aliens, and seeing the new CGI technology creating destruction never before seen so realistically. While the film gave audiences the summer treat of cheering as Will Smith punches an alien, the film paved the way for what we associate with the modern blockbuster.

The Spectacle of Mass Destruction

The classic poster for ‘Independence Day’ doesn’t show any of the film’s actors nor a clear view of an alien spaceship, it instead shows the White House being blown up. Part of the appeal of ‘Independence Day’ was the pure spectacle of seeing realistic mass destruction, from historic landmarks being blown up to skyscrapers tumbling down. Even the film’s trailer gets the audience excited for the mass destruction by showing mysterious shadows hovering over New York City and Washington D.C before we see them burst into flames. While today seeing mass explosions on screen is nothing new, especially with Michael Bay basing his whole career on this, this was new in 1996.

Before 1996, CGI technology was not advanced yet to show this level of destruction so realistically, with prior alien invasion films either using miniature sets of cities or using stock footage of actual wars as a stand-in for the results of the aliens’ chaos. After the newly improved CGI technology allowed dinosaurs to come to life in 1993’s ‘Jurassic Park’, it also allowed for the possibility of creating realistic disasters.

After the popularity of ‘Independence Day’, Hollywood realized that audiences enjoyed the spectacle of realistic disasters with an emphasis on mass destruction. This can be seen in the Hollywood blockbusters that followed that decade such as 1998’s ‘Armageddon’, which follows astronauts stopping an asteroid from destroying Earth, and 1997’s ‘Titanic’, which is both a love story and a recreation of the historical sinking of the Titanic ship. Nowadays it is standard for our summer blockbusters to revolve around advanced CGI technology and mass destruction. Michael Bay, who has made a name for himself, for better or worse, thanks to his use of CGI special effects and explosions, has topped many box office records with his ‘Transformers’ films.

The ‘Transformers’ films, like ‘Independence Day’, showcases burning cities and explosions all at the hands of alien beings. The ‘Fast and Furious’ franchise has succeeded for over nine films in their spectacle of exploding cars and fast-paced action. The reigning king of the summer blockbuster for the past few years, Marvel, has truly followed in the footsteps of Independence Day’s mass destruction and CGI with 2012’s ‘The Avengers’ showcasing superheroes saving New York from an alien army to 2019’s ‘Avengers: Endgame’ showcasing a CGI fueled battle of the ages, explosions aplenty for both. Nowadays, the spectacle of seeing buildings blow up is standard for any July released action flick, but in 1996, seeing the White House explode into smithereens was truly something to behold, impacting Hollywood enough for it to become the norm.

Looking at the cast list of ‘Independence Day’ is like a game of ‘Guess Who’ with big stars such as Will Smith, Jeff Goldblum, Bill Pullman, Randy Quaid, Judd Hirsh, Harvey Firestein, and Vivica A. Fox. At the time of ‘Independence Day’, Will Smith had already made a big name for himself thanks to his fun hit music, the hit series ‘Fresh Prince of Bel Air’, and the box office Michael Bay vehicle ‘Bad Boys’. On the other hand, Jeff Goldblum was also already a box office star thanks to his star-making role in ‘The Fly’ and his iconic performance in ‘Jurassic Park’. At the time, most blockbuster films revolved around having one big name, such as the Bruce Willis’ ‘Die Hard’ series and Harrison Ford’s ‘The Fugitive’, but ‘Independence Day’ showed the value of having large ensemble films with multiple big names sharing the screen together.

The blockbusters of today follow Independence Day’s footsteps by featuring large ensembles of recognizable stars. Many blockbuster franchises thrive on the backs of its A-list stars, trying to fit all of them in each movie poster. The ‘Fast and Furious’ franchise, like ‘Independence Day’, features large ensemble casts that include Vin Diesel, Dwayne ‘The Rock’ Johnson, Paul Walker,  Ludacris, Michelle Rodriguez, Kurt Russel, Charlize Theron, Gal Gadot, and John Cena (the list can keep going). The biggest blockbuster ensemble though is arguably the Marvel cinematic universe, which touts large names like Scarlett Johanson, Robert Downey Jr, and Paul Rudd.

Even the supporting cast in Marvel films, the characters who are not superheroes, are typically star-studded such as ‘Black Panther’ being an ensemble of some of the most respected black actors in Hollywood like Angela Bassett and Sterling K. Brown. The love interests of the Marvel heroes also have included big names like Gwyneth Paltrow, Natalie Portman, and Zendaya. This means that each actor is immediately recognizable to the audience and that each audience member is likely to be a fan of one of the cast members. While a laundry list of star-studded actors being in the same blockbuster is a standard for modern audiences, ‘Independence Day’ paved the way for having an ensemble of stars playing heroes rather than focusing on one singular hero.

“Welcome to Earth” and the Power of One-Liners

In one of the most memorable scenes in ‘Independence Day’, Will Smith’s Captain Steven Hiller punches an alien in the face while saying, “welcome to Earth”. ‘Independence Day’ is often remembered for its funny one-liners, from Randy Quaid’s “I picked a hell of a day to quit drinking” to all of Will Smith’s references to other alien movies like “now that’s what I call a close encounter”. Despite the destruction happening around the characters, they all still remain in oddly high spirits as they quip jokes to one another and even to themselves. These comical quips can be seen in many action blockbusters today, from this scene in ‘Fast and Furious 6’ to the constant funny scenes that occur to balance against all the fighting in the Marvel movies.

Marvel has especially been associated with one-liners and a lighter comedic tone. Marvel has even become infamous for taking A-list schlubby comedy actors and bulking them up to become muscle-bound heroes like the transformation of The Guardian of the Galaxy’s Chris Pratt and the Eternals’ Kumail Nanjiani. They don’t hire comedic actors just so your favorite comedians can get a free workout routine, they hire them because their background in comedy means that they will be able to successfully deliver jokes and even improvise their own funny lines. With Will Smith’s background as the star of his own sitcom and his character’s constant quips, one could argue that Captain Steven Hiller set the standard of the modern leading man, being both confident and funny.

Despite the mixed reviews from critics, calling the plot thin, ‘Independence Day’ was a hit with audiences, making history as the best-selling film sold on VHS. Hollywood, seeing the popularity of ‘Independence Day’, tried and succeeded to emulate the film’s success by taking its most successful attributes and applying them to future films. This has thus created a new standard for the summer blockbuster that we still see today, from realistic scenes of destruction to ensembles of big named stars to some lighthearted comedy in between all the action. ‘Independence Day’, with its fun and arguably lackluster energy, truly paved the way for the big-budget summer blockbusters that would follow years later. The action-packed CGI spectacles of the modern blockbuster, from Marvel to ‘Fast and Furious’ to anything Michael Bay has under his belt, have a lot to owe to the summer hit that started it all.

‘Independence Day’ is available to stream on Hulu.