‘I Carry You With Me’: A Bittersweet Movie About Gay Love, Immigration, and the American Dream 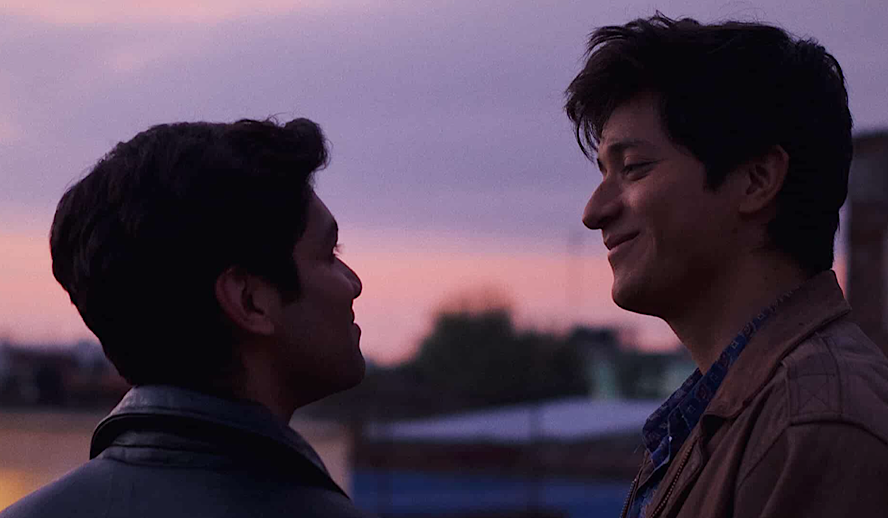 Photo: ‘I Carry You With Me’/Sony Pictures Classics

‘I Carry You With Me’, director Heidi Ewing’s newest film, is a masterpiece about the fragments of moments that shape us. Time and space are constantly changing, as are feelings and attitudes in this film. It’s also a testament to true love, and how that love can burn inside of us even decades later.  Partly a story about romantic love, partly a story of immigration, and partly a story about change, ‘I Carry You With Me’ is a heart-wrenching, beautiful movie.

A Feeling of Nostalgia and Loss

Perhaps the most beautiful part of ‘I Carry You With Me’ is its cinematography. As Ewing stated in her interview with The Academy, she tends to use a voyeuristic approach. We peer around walls to watch Gerardo and Iván talk, making us feel like we’re as secretive as they have to be. Juan Pablo Ramírez’s camera rarely interacts with them and instead follows them from one spot to another. When they’re in a gay bar, we feel the same anxiety and claustrophobia that Iván feels as he looks around the room. People bump into the camera as if we’re just bystanders. It’s as if we’re characters in the movie, rubbing shoulders with everyone else.

Ramírez’s camera is almost always handheld. It bobs up and down, and gets jostled by other characters, like it’s our own perspective. It also rarely lingers on anything, making the moments where it does linger even more powerful. In one scene, we see an extreme close-up of Gerardo’s lips as he talks and then we cut out to see Iván looking at him. It’s an intimate film, especially because it feels like we’re intruding on such private moments.

At the same time, it’s almost a giddy feeling as we fall in love as Gerardo and Iván do. We see them talk about the reality of their situations as gay lovers, as well as their hopes and aspirations. It’s almost as if we’re the third member of this relationship, as we cry and laugh along with them. ‘I Carry You With Me’ shines in the littlest moments, where we are given a deeper understanding of just how important these men are to one another. We are with them in the darkest times, which only makes the distance between the two even harder to swallow. When Iván eventually leaves Mexico, it’s as if we’re left behind just like Gerardo is.

Director and co-writer Heidi Ewing approached this movie with a very unique mindset. ‘I Carry You With Me’ was her first narrative feature; in the past, she’s only done documentaries, and her nonfiction style combines with fiction to create a heartfelt story rooted in reality. The world of Iván (Armando Espitia) and Gerardo (Christian Vazquez) is rich with life and overflowing with small, tiny details that make it their own. They’ve all had an impact on their town in one way or another. They both have strong things keeping them in Mexico, Iván has a son, while Gerardo, a school teacher, has his job and his career to worry about.

One of the biggest strengths of this movie is Ewing’s ability to display how hard immigrating is, and the various reasons one might immigrate. There’s more than just an economic benefit, oftentimes it’s a life or death matter. There are so many details in the story that it makes it seem more like a documentary, the characters are so fleshed out and so vibrant it’s like we’re observing a story happening in real-time.

Most of this effect is due to Ewing’s directing and her cinematographer Juan Pablo Ramírez. Both agreed on not utilizing blocking, or set marks for the actors to land on, on set. During rehearsal, they had the actors land in certain places, but Ewing mostly instructed Ramírez to follow Iván and Gerardo with the camera and that was that. The actors were also often asked to improvise, and every last take of a shot would be completely improvised. In an interview with The Academy, Espitia talked about how Ewing would want them to do something different every take.

It taught them how to live in the moment and focus more on their character’s want than what the director wanted. Ewing also confessed that most of the final shots, which were always improvised, were the ones she often ended up using for the film. Because of this, the film felt more real and more relaxed. The moments between Gerardo and Iván felt more natural, and the two actors had great chemistry with one another. With such a different background than most film directors, Ewing was able to pull out unique performances from her actors.

The Reality In ‘I Carry You With Me’

‘I Carry You With Me’ replicates Ewing’s signature aesthetic, especially since it’s based in reality. The story itself is based on two of Ewing’s friends, although some details have been conflated for narrative purposes. Gerardo and Iván are both aware of their statuses as gay men in Mexico, but Iván wants to run away to America to become a chef. The two argue about it, especially since Gerardo is content with living where he is, and eventually, Iván runs away with his friend.

At this point in the film, the mood changes. The movie transforms from a melodrama to a thriller as Iván crosses the border and makes his way to America. It’s an interesting way to give justice to how hard immigrating is, especially illegally. The film tackles these hard issues well and weighs the pros and cons of immigration for Iván. In Mexico, he’s hated for who he is, but if he was found in America, he would be persecuted for his illegal immigration. It’s a lose-lose situation, but he pursues his dreams in order to provide for his young son. As soon as Iván and his friend make it to New York City, we skip to the future where Iván’s son is all grown up. Iván has achieved his dreams of becoming a chef, but at what cost?

After leaving Mexico twenty years ago, he finally reunites with Gerardo. They’re both extremely different now, no longer the bright-eyed young adults they used to be. Iván has risen through the ranks, but left his family and his lover behind. Time has driven a wedge between them, and they’ve both changed drastically. There was always too much driving them apart, though their love for one another brought them together. After twenty years, they no longer know each other, both figuratively and metaphorically. In the end, ‘I Carry You With Me’ finishes on a bittersweet but truthful note, about the sacrifices we make in love and in life to achieve our own dreams.

‘I Carry You With Me’ is available to watch in select theatres starting on June 25.