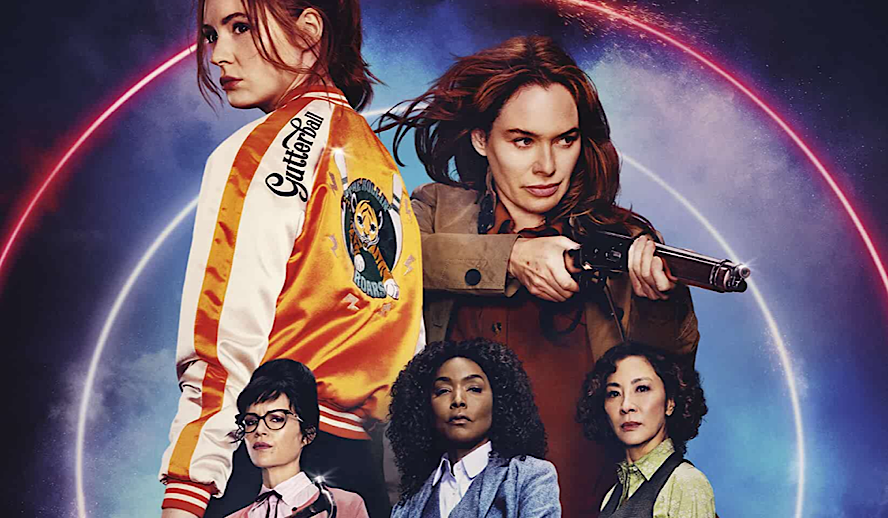 Everyone’s favorite streaming service, Netflix, has released this high-intensity, female-led action film, ‘Gunpowder Milkshake’ today and it has already received a lot of traction. So far the critics are loving this, as it has received eighty-five percent on Google, and sixty-seven percent on Rotten Tomatoes. Many people seemed to really enjoy it, and that’s fantastic. The title, ‘Gunpowder Milkshake’ was a bit confusing to me, as I was not sure what to make of it. After watching the film, it all becomes clear now. It’s a little bit of violence, and a little bit of sweet/childish. That is a perfect description of the film’s entirety.

The Navot Papushado directed film features very well-known actors and actresses such as, Karen Gillan, who is best known for her portrayal of Nebula in the Marvel film, ‘Guardians of the Galaxy’, Lena Headey who is best known as the ferocious Cersei Lannister on HBO’s Emmy award-winning series ‘Game of Thrones’, and Angela Bassett, who is best known as Brenda Brown in the 2008 Tyler Perry classic film, ‘Meet The Browns’.

All wonderfully strong performers, that have sold us on their powerful characters in the past. Knowing this, my expectations were obviously very high. I wanted to love this film so bad. Now, I absolutely love when films openly embrace the strengths and skills of women are celebrated. Unfortunately, while I can appreciate the film for its entertainment value, I do have a few qualms about it that I wanted to address.

I couldn’t help but notice, that there is an undeniable trend that has been happening with many of the female-led action films that have been released in this decade. This strange need to mix cheesy dialogue with unnecessarily vibrant color schemes and bouncy/ vintage clothing to make the women in these films appear more…quirky, for a lack of a better word. This feels very tired and played out to me. There is also a choice to make the leads either obnoxiously flamboyant or so desensitized to the point where they are almost robotic, in their tough girl actions and dialogue.

I think it is needless to say that this movie felt a bit underwhelming to me personally. However, I can’t deny the market for it. A group of beautiful women who perform the most gruesome yet creative brutalities on a bunch of scummy, deserving men. Yes, people eat that kind of content up these days. Though quite enjoyable to watch, given that there was never a dull moment, I wish the audience had more backstory on these characters’ lives.

We get a brief backstory between Sam and her mother, Scarlet, once they are reunited, but it is very empty. There were so many questions I had regarding the origins of these people, and based on some of my other critiques of films, it is one of my biggest pet peeves in filmmaking. Filmmaking is all about storytelling. How can I be fully invested in a story, if I do not know anything beyond what is presented on screen? Why are these things happening? Why did the good guys become the bad guys? Better yet, when did the good guys become the bad guys?

It was already so hard to relate to, given that I have never been a hitman or affiliated with any industry of the sort. I suspect most audience members aren’t. However, the film made it pretty hard to establish any sympathy or empathy with any of the characters because all we knew about them was the now. No past, and no real goal. Was the goal freedom? Well, then push that narrative. Make me believe that these characters want to change. It looks like everyone here likes being murderous.

No Slow Or Dull Moments

Now that my personal rant is over, let’s get into what aspects of this film that I did find enjoyable. I liked the cinematography, overall. Sometimes the actual choreography within the fight scenes appeared stale and very clearly rehearsed. The editing and camera angles helped it out a lot in my opinion. I like that the film is female-led. I know it sounded as if I were disappointed that ‘Gunpowder Milkshake’ was a female-led action film, but that is not the case.

I love female-led films of any sort. I will stand behind them, and support them one hundred percent. What makes me angry, is the lack of originality behind them. They start to blend into one another which makes people less interested in seeing them. People will feel like they have already seen ‘Gunpowder Milkshake’ after seeing films like, ‘Birds of Prey’ and ‘Kill Bill’. I just want the representation for us ladies to be a little more creative, is all.

If you want to watch something that will keep your excitement and entertainment, then this is perfect. I just find that I prefer a deeper storyline. Despite the writing being a little unrealistic and sounding a bit forced, I did enjoy the presence of some of the familiar faces on screen. Actresses such as Angela Bassett, Karen Gillan, and Lena Headey graced us with their talents. I also really liked Paul Giamatti’s role in this film.

Paul Giamatti can do no wrong in my opinion. Any film he takes part in, I find that he ends up stealing the show for me, and this film is no exception to that. I know I give this film flack throughout this review, but it was not the worse thing I’ve ever seen. I think I just expected more. Like I mentioned before, this film is available for streaming on Netflix, so I would suggest checking it out for yourself. It is a possibility that you may disagree with me, and find it to be beyond enjoyable. If you like high energy, action, and wit, then I totally recommend this for you. If you are someone like myself and are looking for something beyond surface value, I don’t believe you will be able to find it with this film.