Iliza Shlesinger’s ‘Good on Paper’: Enjoyable Rom-Com With A Twist 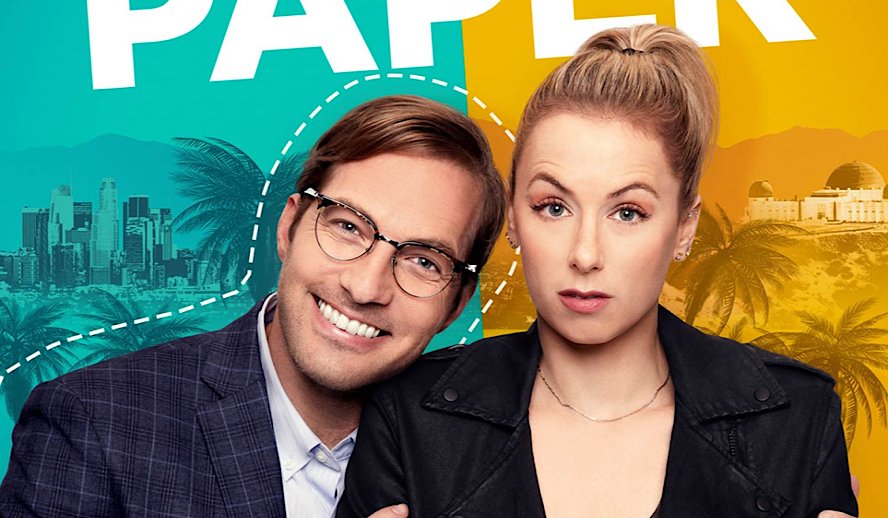 New to Netflix this week is the rom-com-thriller hybrid, ‘Good on Paper’ from director-actress Kimmy Gatewood who appears in television series such as ‘GLOW’ and ‘Atypical’. The film is written by its star, comedian Iliza Shlesinger, and is loosely based on a true story, a story that “began with a lie”. The film follows Andrea, a stand-up comic played by Shlesinger, who falls for Dennis, a smart, successful businessman played by Ryan Hansen, but soon Dennis begins to seem too good to be true.

‘Good on Paper’ is a film that is very uneven — while offering some unique elements that are both unexpected and welcomed, the film struggles at times to find its groove and figure out exactly what kind of film it wants to be by the time the credits roll. The film is not without its merits, excelling at its characterization and development of its characters resulting in a very easy watch that will provide a few chuckles but never kicks into the third gear you’d hope it would.

‘Good on Paper’ – What Worked

The star of this show has to be Iliza Shlesinger — marking a transition into acting from stand-up comedy, the star is coming off of projects such as Peter Berg’s ‘Spencer Confidential’, starring Mark Wahlberg and Winston Duke, and ‘Instant Family’, which also starred Wahlberg as well as Rose Byrne. Shlesinger’s charisma elevates this film completely; she is incredibly likable and relatable both in the writing of her character as well as her performance. The film feels very much like it was written by a stand-up comic in its witty dialogue that moves quickly, similarly to Kumail Nanjiani’s ‘The Big Sick’, which is praiseworthy as it helps to keep a good pace for the film.

The writing specifically excels in the dialogue and characterization of the film’s characters. Shlesinger’s character goes through a very compelling arc, both with her relationship with Dennis as well as a rival actress played by Rebecca Rittenhouse of Quentin Tarantino’s ‘Once Upon a Time In Hollywood’. The character’s plight of career dissatisfaction is one that was very effective and compelling and while some may argue it to be generic, I would push back on that — just because an arc is commonplace does not mean it cannot work and here I think Shlesinger justifies the arc in her writing.

There are segments where Shlesinger’s character is doing a standup show that acts as a throughline and really feels to tie the film together from the beginning, middle, and through the end. These scenes felt very authentic and sold the stand-up comic element of Shlesinger’s performance which definitely feels second-hand at this point. Another great performance in the film is that of Ryan Hansen of ‘Veronica Mars’ starring Kristen Bell and the 2009 ‘Friday the 13th’ reboot.

Hansen’s character requires a lot of range and he pulls it off in his performance very believably — the moments of levity and charm he hits while also making the darker moments compelling. The film is technically sound, the camerawork and cinematography are subtle and do not ever overly impress nor distract. There are several scenes in crowded areas in which I thought the sound design worked well and felt immersive at the moment. To the film’s credit, it does not always go where one may expect it to, which if going in blind can provide some satisfying and intriguing surprises.

The film’s biggest issue is its uneasy-ness in choosing what it intends to be — what I mean by this is that at times, the film is trying to lean into the thriller aspects of the story but doesn’t ever fully commit to that shift. The rom-com tone stays consistent throughout the film which feels like it undercuts some of the scenes that could have been especially compelling. I’m not exactly sure why those scenes didn’t work as there are examples of thriller-comedies that have worked such as ‘Game Night’ starring Jason Bateman, but for whatever reason, I found myself not loving those moments. It’s possible this is just my personal preference, but I thought it was of note.

The film’s ending as a whole feels like it could have packed more of a punch than it eventually did. The film tries to end with a message which, while earned, doesn’t hit as hard as it could have. It just felt as if it did not take the last step and stopped an inch too short of the finish line and could have revealed more. I cannot get any more specific without getting into spoilers, so you’ll have to see the film for yourself to form your own opinion.

For having very unique elements to its plot, it does come as a bit of a disappointment when the film falls into some more cliché tropes such as narration and some story elements. While not a deal-breaker, it did feel like there were ways to tell this exposition visually rather than just telling the audience. Overall, these issues are most likely not going to ruin the watch of the film for you and should be taken into account ahead of watching, but should not dissuade you from watching the film if you had already been interested in it.

‘Good on Paper’ is a very watchable film — with great performances from Iliza Shlesinger and Ryan Hansen and quick, witty dialogue from Shlesinger’s script, the film is one that is easy to sit back and enjoy. While there are certainly flaws to the film, none are overwhelming enough to ruin a viewing of a film. Despite the film’s struggles to find a lane, the film offers enough chuckles and sweet character moments to provide an enjoyable watch.

With great stand-up comedy scenes and unique story elements, I would encourage fans of Shlesinger’s work and romantic-comedies to check the film out but also warn those excited for its more thriller-esq aspects to understand what they are getting into. At the very least, however, there is a cameo from ‘The Bachelorette’ star Tyler Cameron making the film worth the watch from that alone.

Where to Watch ‘Good on Paper’

Check out ‘Good on Paper’ on Netflix today. Be on the lookout for Iliza Shlesinger to appear on the television series ‘Little Funny’ by creator Ellen DeGeneres alongside Chris Rock and others.