‘Marry Me’: The Return of the Classic Rom-Com | Jennifer Lopez, Owen Wilson, Maluma 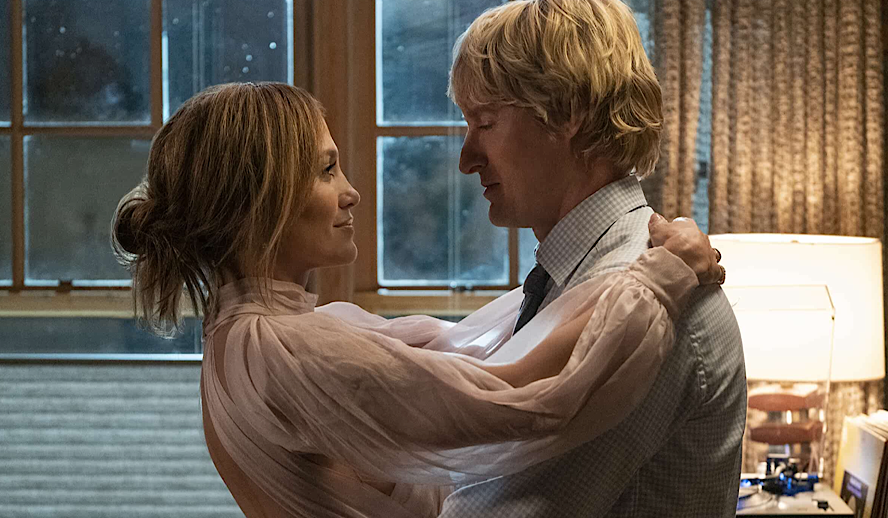 Once upon a time, romantic comedy dominated the film industry. The 80s brought us ‘When Harry Met Sally’, we got ‘He’s All That’ in the 90s, and ‘13 Going on 30’ in the 2000s. Rom-coms are easy to love, we’re meant to be immediately emotionally invested in the characters and root for them to get together. The formula was simple but still left us with stories we love as new characters and situations livened up basic patterns. In recent years, rom-coms suffered from the rise of action, world-building, and art films, leading Hollywood to make less and less light-hearted romantic comedies in favor of other genres.

When the news breaks that Kat Valdez’s fiance is cheating on her right before her public wedding, she spots Charlie Gilbert in the crowd holding a “Marry me?” sign. So, she does. The film follows the couple as they navigate being married strangers in the public eye and fall in love along the way. ‘Marry Me’ follows the recipe of a classic rom-com, each ingredient is there. Our leading couple, Kat and Charlie, do not belong together in the typical sense. Kat is a pop star, a seasoned celebrity. Charlie, on the other hand, is anything but. He’s a father, a teacher, and an all-around regular guy. Nobody would expect these two to be together but undeniable chemistry and unlikely circumstances bring them together.

‘Marry Me’ is everything you’d expect a rom-com to be – romantic and funny. There’s a reason there’s such a distinct formula for making rom-coms, it works. It’s hard to make a movie with two likable love interests, a band of quirky side characters, and a unique situation that doesn’t get an audience hooked. The characters are easy to root for and immediately compelling and the added level of stardom and fame elevates the story to be more interesting than just a simple love story.

‘Marry Me’ – Filling the Rom-Com Roles

One of the most important parts of a rom-com is the side characters. These characters are typically where we get most of our comedy and we need them to aid our leads along the way. These characters were probably the best part of ‘Marry Me’, adding humor and life to the leads outside of their relationship. On Charlie’s side, we had Sarah Silverman as Parker, Charlie’s coworker, and best friend. As an ‘SNL’ alum, it’s no surprise that Silverman brought comedy, sarcasm, and life to the character, which was needed to balance out Charlie’s overwhelming averageness. There was also added depth to Charlie in the form of his daughter, played by Chloe Coleman.

On Kat’s side, we have her team, including Michelle Bateau as Melissa and John Bradley as Collin. Melissa is social media obsessed, constantly live streaming or otherwise updating the world on Kat and Charlie’s budding relationship. Her character and Bateau’s performance are fresh to 2022, adding a modern twist on the traditional rom-com. Melissa is balanced out by Collin, who, as Kat’s manager, is much more worried about public image than Twitter updates.

The majority of the press surrounding the film’s release surrounded the big-name leads. When a film stars JLo and Owen Wilson it’s going to be talked about, regardless of plot. Owen Wilson is a romantic comedy veteran, starring in films including ‘Wedding Crashers’ and ‘Meet the Parents’. His portrayal of Charlie worked due to how normal he was. Charlie was an average guy and Wilson nailed the mundane aspects of the character. Before his unlikely wedding, all Charlie had on his mind was his daughter and his math team, not fame and stardom.

Charlie’s averageness was needed to balance out JLo’s portrayal of Kat, an over-the-top A-lister. Jennifer Lopez is, of course, known not just for her acting but as a pop superstar, so she flourished playing a role that combined the two. We got to see JLo perform the film’s original music and shine on stage in front of massive crowds. She was the perfect fit to play a global sensation, who better to play a pop superstar than another pop superstar?

The Good and the Bad of Basic Rom-Coms

Romantic comedies are successful because the blueprint works to create entertaining and engaging films, and ‘Marry Me’ was no exception. The characters were likable and sympathetic, the situation was interesting and compelling, and the comedy was constant throughout. But ‘Marry Me’ was not tied down to a basic format. The film was able to weave in modern elements to the kind of story that has been around for decades. The role social media played in the film was fresh and interesting and celebrity cameos, such as Jimmy Fallon on the in-universe ‘Tonight Show’ added a modern twist for 2022.

The weak point, along with many rom-coms, comes from the surface-level feel of the story. I found myself wishing it would dig deeper into the characters’ lives and the development of their relationships but it did not deliver. Some lines seemed cheesy, the characters were almost caricatures and the premise is so outlandish that it took me a while to accept it. However, if you take the film for what it is, a ludicrous but compelling storyline with a lot of heart, it gets the job done.

‘Marry Me’ is not the most intelligent, ground-breaking, or experimental film out there, but that doesn’t mean it isn’t good. If you’re looking for an easy watch, an interesting premise of lighthearted comedy then ‘Marry Me’ is a great pick. The cast shines in their unique roles that all come together to create a rom-com suited for 2022.

‘Marry Me’ is currently playing in theaters and on Peacock.