Must Watch – ‘Jackie Brown’: 25 years later, Is It Outrageous to Call Quentin Tarantino a Feminist? 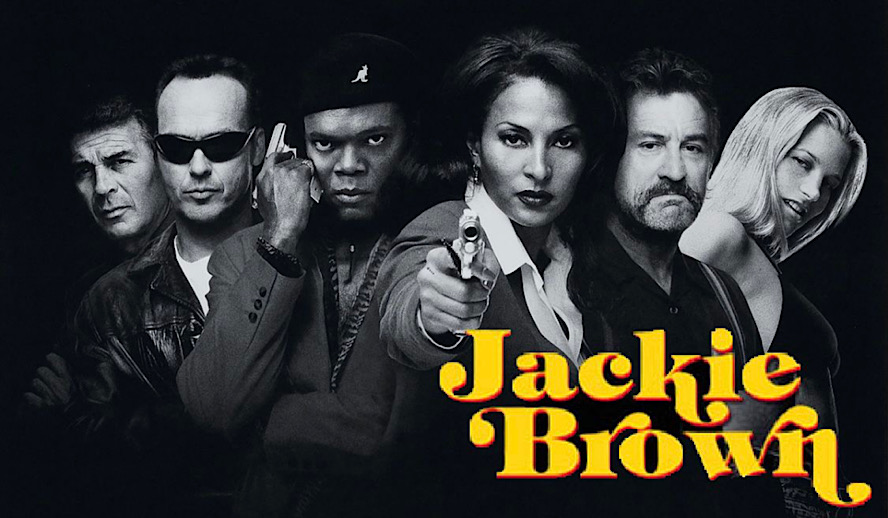 Quentin Tarantino’s 1997 heist film ‘Jackie Brown’ hits HBO max this month. It’s definitely lower on the radar of Tarantino’s best-known work, and its underratedness is a mystery. The film stars Pam Grier as the titular character, a Los Angeles-based airline stewardess who smuggles money from Mexico for arms dealer Ordell, played by Samuel L. Jackson. After getting ratted on and arrested, Jackie comes up with a clever plan to gain her financial independence and guarantee herself no prison time by double-crossing Ordell and the cops she makes a deal with.

She’s helped by the sweet but never boring bail bondsman Ordell uses, Max Cherry, played by Robert Forster in an Oscar-nominated performance. Max is smitten with Jackie the minute he picks her up from jail, and their courtship is one of the most elegantly done middle-age romance depictions on the screen. The film also stars Robert De Niro as Ordell’s accomplish, a hot-tempered dim-witted criminal named Louis, and Michael Keaton as the narcotics cop on the case.

The film is a tribute to the popular Blaxploitation genre of the 1970s. The era is at once derided for its stereotypical depictions of black people as criminals and also esteemed by some as being a vehicle for black movie stars with starring roles, the biggest of which was Pam Grier herself. Grier’s most iconic two films were ‘Coffy,’ in which she plays a scorned nurse out for revenge after her sister overdoses, and ‘Foxy Brown’ another revenge feature that gave Grier a reputation for badass roles.

With Jackie Brown, Tarantino gave Grier, a middle-age black woman, a second chance to be the hero of an action movie. She was getting so few starring roles at the time that she thought Tarantino gave her the script in consideration for the role of Odell’s pothead girlfriend, Melanie (played by Bridget Fonda). Instead, Grier shines as the hero of this stylish and fun heist film with important themes about age and gender at its center.

Casual graphic violence, retro soundtracks, pop culture references, and history rewrites are recurring elements that most ordinarily pop into mind when someone says Quentin Tarantino. However, it’s not outrageous to add “strong female characters” to the list. Jackie Brown, The Bride from ‘Kill Bill’ (as well as O-Ren Ishii, Vernita Green, and Elle Driver), and ‘Inglorious Basterd’s’ Shosanna Dreyfus are great characters because Tarantino doesn’t make them feel like they are forcibly working for the greater good of females everywhere.

Instead, they are all dealing with very personal issues and simply happen to be female, making feminist themes inevitably pop up. One great thing about ‘Jackie Brown’ is that her femininity is not hidden for the sake of making her look like a badass, it’s embraced. The suit she’s had her eye on that she tries on in the department store looks damn fantastic on her and she knows it. She catches a glimpse of herself in the mirror as is taken aback by the boss woman looking back at her. The saleswoman compliments her saying that the second she walks into a business meeting in that suit she will be “the badass in the room.”

That’s exactly what she is in a later scene as she sits at a desk waiting to confront Ordell. When Melanie comes to do what she thinks is the switch, like any good girlfriend she tells Jackie how great she looks in the suit and asks if she’s going to buy it. At the same time, Jackie, like any real woman, shows very human weakness and is not judged for it nor does it ever belittle her. A surprisingly moving moment is when she has pulled off the heist but is still being interrogated by the cops she was supposedly working with. They leave the room and she takes a deep breath, wiping tears from her eyes and composing herself.

Tarantino’s hidden feminism sneaks its way in through other elements as well. As if to subvert our expectations of what kind of film we are about to watch, Tarantino opens with the great sequence of Jackie going to work. She’s a well-dressed flight attendant, an ordinary job, a seemingly ordinary woman, clearly the protagonist of the film. It is immediately followed by a scene where Ordell and Louis are watching a TV show titled “Chicks Who Love Guns” which features bikini-laden girls talking about machine guns and demonstrating their use.

It’s the kind of thing you expect from an action film, but it is so far away from our uniformed hero we just followed to work. Jackie’s underlying mission is to gain financial and personal independence, two criteria on which feminism is based in. She bravely states that she isn’t afraid of Ordell hurting her, she is more afraid of losing her shitty job and having to start over. Ordell by the way is the one who sees the main use of his girlfriends as entertaining him, answering the phone, and getting him more ice for his endless screwdrivers. “What did Ordell ever do for us?” Jackie asks as she slips Melanie a few thousand dollars during the heist. Unfortunately for her, Louis’s rage eventually gets the best of Melanie before she can spend it.

Age is Just a Number

Another important theme in Jackie Brown is age. Hollywood has a long history with ageism, and Tarantino is overtly explicit about its implications in this film. One of the cops belittles Jackie explaining how desperate for their help she should be as a 44-year-old black woman clinging to a bad job. As they are getting to know each other, Jackie asks Max, who is 56, how he feels about getting old. He admits he doesn’t mind it but when his hair started falling out he had to do something about it and he feels much better about himself, a decision that is not ridiculed or judged.

He announces he plans to give up the bail bonds business because he wants a more fulfilling life. Even De Niro’s Louis is feeling the pressure of aging as he is unable to smoke as much weed as he once did, “I’m just… getting old” he laments. It is common to see young characters not wanting to go to jail, be financially independent, or search for their lives’ purpose because they have their whole life ahead of them. However, ‘Jackie Brown’ seems to remind us that these ambitions should not be any different even if you’re a little older: the life ahead of you is very real and is no less valuable because of your age.

The technicalities in the film demonstrate Tarantino at his best. In particular, he makes good use of and immortalizes LA landmarks and uses music motifs to express character extremely effectively. Overall, it’s a fun, smart, homage to a genre done more respectfully than the films it is inspired by. If it’s one of those Tarantino’s you haven’t’ seen stream it today on HBO Max.