Los Angeles Movies: History of Films About L.A. | ‘Once Upon A Time in Hollywood’ & More 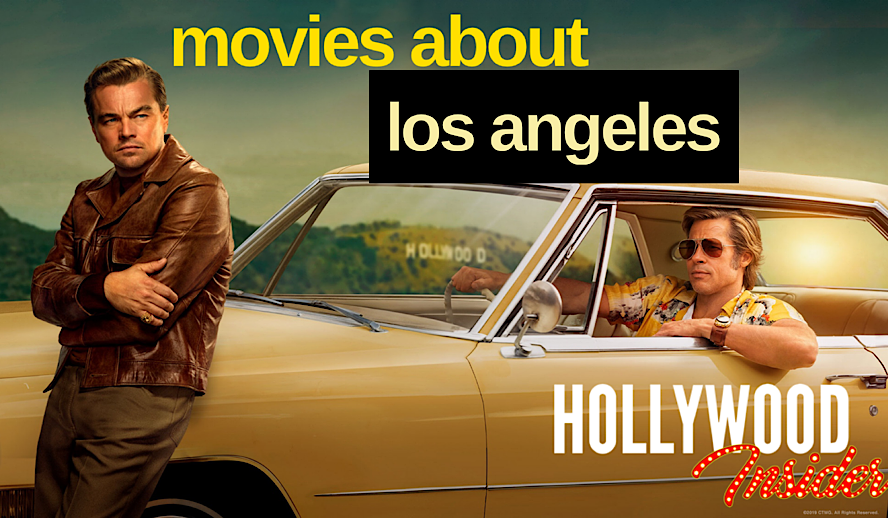 Los Angeles has been synonymous with moviemaking ever since the inception of Hollywood. Most of the big studios have their roots in the city, and many still operate in the area or in greater Los Angeles. And while many films cover a range of stories set in other places, there are still many that focus on the city of Los Angeles itself.

Los Angeles sprawls over thirty thousand square miles and has a diversity of cultures and neighborhoods. These different areas are the backyard of Hollywood. It would make sense for there to be several films made in the backyard.

Below will be a list of movies filmed in Los Angeles about Los Angeles. They will be in no particular order but will aim to capture a snapshot of the history of film representing the city.

‘Stand and Deliver’ follows the story of a high school teacher who sees the untapped potential of  his students and goes against the grain of the expected standards. The film is set in East Los Angeles and is based on the true story of Jaime Escalante. The film was nominated for one Oscar, Best Actor in a Leading Role for Edward James Olmos’s portrayal of Escalante. ‘Stand and Deliver’ offers a more in-depth view of the culture and determination of L.A. natives.

The debut film from the late director/writer John Singleton is a coming of age tale that provided insight into a life that is rarely seen by those outside the community. ‘Boyz N the Hood’ follows the lives of three young males dealing with the issues of relationships, race, violence, future prospects, and going from adolescence to adulthood in Crenshaw, Los Angeles.

Switching to humor in the city of Los Angeles, it’s hard to beat the Coen Brothers’ ‘The Big Lebowski.’ The film entails the life of Los Angeles slacker Jeff “The Dude” Lebowski as he gets embroiled in the plot of a kidnapped trophy wife. It’s a wild ride that isn’t for everyone, but if it is, you’ll howl with laughter at where the story takes you.

‘Sunset Blvd.’ is a Hollywood classic. It is an American noir film that focuses on the relationship between struggling screenwriter Joe Gillis and a former silent film star Norma Desmond. The association is a creepy brew of Desmond’s irrational behavior and Gillis’s willingness to play along. The film was nominated for 11 Oscars, winning 3. It is continuously picked in the rankings of best movies ever made.

This Neo-noir film about three policemen investigating a series of murders in ’50s Los Angeles is a modern classic. ‘L.A. Confidential’ was up against ‘Titanic’ at the Oscars with a total of 9 Oscar nominations. It won two in the departments of Best Actress in a Supporting Role for Kim Basinger and Best Writing – Screenplay Based on Material Previously Produced or Published.

‘Blade Runner’ doesn’t depict a classical or contemporary view of Los Angeles but will make the list for incorporating the city in its idea of the future. The film is based on Philip K. Dick’s Do Androids Dream of Electric Sleep, but unlike the novel, the film is set in a future Los Angeles rather than San Francisco. The 1982 film has Harrison Ford as Rick Deckhard hunts down four replicants in 2019 Los Angeles. Unfortunately, its prediction of flying cars didn’t come to pass.

Both of these films are written by David Ayer. Antoine Fuqua directed ‘Training Day,’ while David Ayer helmed ‘End of Watch.’ ‘Training Day’ depicts Ethan Hawke’s trial under Denzel Washington as to whether or not he can make it as a narcotics officer. ‘End of Watch’ follows Jake Gyllenhaal and Michael Peña as two L.A. cops who find themselves against forces greater than themselves. Each film provides a unique perspective on policing in Los Angeles.

‘Marriage Story’ was nominated for 6 Academy Awards. The film switches between New York City and Los Angeles as a couple tries to figure things out as they go through a divorce. Adam Driver and Scarlett Johansson put in stellar performances in the leads alongside an Oscar-winning performance of Supporting Actress Laura Dern. While their relationship and custody battle is the focus of the film, Los Angeles is in the background. And, hey, it has space.

‘Once Upon a Time in Hollywood’

Last but not least is Quentin Tarantino’s homage to Hollywood. Many of his films are set in Greater Los Angeles, while this one captures the vibe of the town in the Golden Age of 1969. Brad Pitt and Leonardo DiCaprio showcase the heights of their acting abilities in the film that follows the relationship between a stunt double and a fading television star, as they try to revive their careers amid a tumultuous array of cultural happenings.

‘Nightcrawler’ | ‘The Long Goodbye’ | ‘Clueless’ | ‘Double Indemnity’ | ‘Rebel Without a Cause’

Related article: Once Upon a Time in Hollywood Review: A Stylized Love Letter to 1969

These films represent many different stories of Los Angeles culture and filmmaking. They are movies well worth watching and give a diverse taste of what the city has to offer. Many more movies about the city were not covered in the article, but this should provide readers with a great place to start. The Honorable Mention list is extensive and aims to pick out ones that weren’t covered, but are worth taking a look. Undoubtedly, some were missed.

Hopefully, there are some movies on this list you haven’t seen and will be excited to watch for the first time. And if you have seen them, maybe it’s time for another watch. The films above depict many different stories, but what they all have in common is a depiction of Los Angeles.