Revisiting ‘That 70s Show’: The Nostalgic Teenage Shrine For Millennials 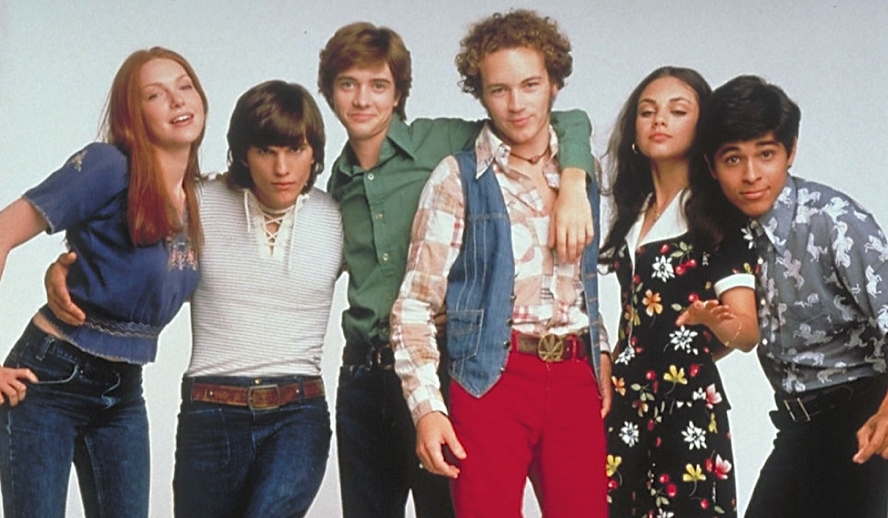 Sitcoms have been making audiences laugh for years now. In the 1950s, the American public began to fall in love with what was known as “situational” comedy. Shows like ‘I Love Lucy’ paved the way for the hundreds of popular sitcoms we have today. Sitcoms are so popular because it is easy for the audience to relate. Character-driven storylines and quirky/wacky characters often drive the script, gathering laughter and avid followings. Sitcom writers have to install relatability with every character in order for their stories to work. That is why these shows have become wildly popular, and to this day the number of comedies that grace our screen is innumerable. It has never mattered if the sitcom is set in the 50s, 60s, or 70s, if the jokes are landing and the characters speak to their audience, the sitcom will last. Maybe that is why ‘That 70s Show’ was an enormous hit at the end of the 90s.

‘That 70s Show’ is one of FOX’s most successful sitcoms, it was released in 1998. The show is about the life of a group of teenagers living in the outskirts of Wisconsin in the mid-70s. The comedy follows the life of Eric Forman, Topher Grace. Eric’s relationship with his friends and family is the main focus of the series. While his experience of becoming an adult and separating himself from the dependency of his parents is part of the plot.

The characters consist of six best friends, all filling in the standard tropes of comedy in the best of ways. It did not matter if these kids were wearing bell-bottoms while hiding in the basement to smoke a “j.” The sitcom’s incredible writing and hilarious characters gave no choice to the viewers but to love them and feel highly relatable to them. The sitcom paved the way for all of the careers of its lead actors and even sprouted a beautiful marriage.

The Teenagers… Be Groovy, Be Very, Very Groovy.

Side note: The joke for Fez’s character, who, by the way, real name was never revealed as “Fez” are just the initials for “Foreign Exchange Student,” is that nobody knows Fez’s actual background. The beautiful Ashton Kutcher plays Michael Kelso; he is the naive and the “Joey” of the group, he is extremely easy to influence. Jackie, a fourteen-year-old Mila Kunis, plays the group’s adorable but extremely bossy outcast. She is not as laid back as the others, as she always expresses precisely what she is thinking and strives to be the best.

They Were Not Regular Parents, They Were Hilarious Ones

Then we have the parents because, let’s be real, the show wouldn’t have been the same if it wasn’t for the older cast performances. ‘That 70s Show’ parents added that extra something into the show, and their comedy timing is always impeccable. Eric’s parents are played by Debra Jo Rupp, Kitty Forman, and Kurtwood Smith, Red Forman. Eric’s relationship with both of his parents and his sister, Laurie, adds to the show’s comedy. Kitty is the overprotective innocent mother, who still treats his teenage boy as a baby and is often embarrassed. This situation is highly relatable to any son watching. It takes the audience back to the time they were still treated like enormous babies by their mothers. Red’s monotone delivery and his cold approach towards his son and their relationship are usual laughing gags for the show, as Eric is terrified of his father, who has no patience for stupidity.

The show contrasts father/son relationships, father/daughter, mother/son, and mother/daughter relationships to highlight comedy and honest human behavior. Literally like every father, Red’s heart melts every time his daughter Laurie, played by Lisa Robin Kelly, asks for anything, even when his personality is one of a hard ass, he cannot deny anything to Laurie’s puppy eyes. But underneath all the craziness, the Forman’s are a typical American family who wants the best for each other.

Then There’s The Reboot… ‘That 90s Show’

After its release, ‘That 70s Show’ became a favorite between audiences, lasting for almost ten seasons. ‘That 70s Show’ is a show that is still desired and watched by many thanks to its hilarious writing. The streaming platform, Netflix, streamed ‘That 70s Show’ for a few months before taking it off-air, realizing the number of views the show was getting making, Netflix approached the producers. When Netflix reached out to Marcy Carset, Tom Warner, and Greg Mettler, the show’s original producers, they found that Carset, Warner, and Mettler had been in the talks for a reboot for a few years.

After several back and forth, Netflix decided to pick up a ten-episode reboot of ‘That 70s Show.’ The difference is that this time the teenagers of Point Place won’t be wearing bell-bottoms or be disco-ball dancing, but they will be smoking joints while watching a movie from Blockbuster and sitting next to their Disc man. The new reboot will be called ‘That 90s Show,’ and it will still be set in Wisconsin, in Kitty’s and Red’s house, but this time Eric’s and Donna’s daughter will be the one visiting her grandparent’s basement for the summer.