Ross and Rachel VS Jim and Pam: Who’s a Better Couple to Watch? | Sitcom Couples Showdown 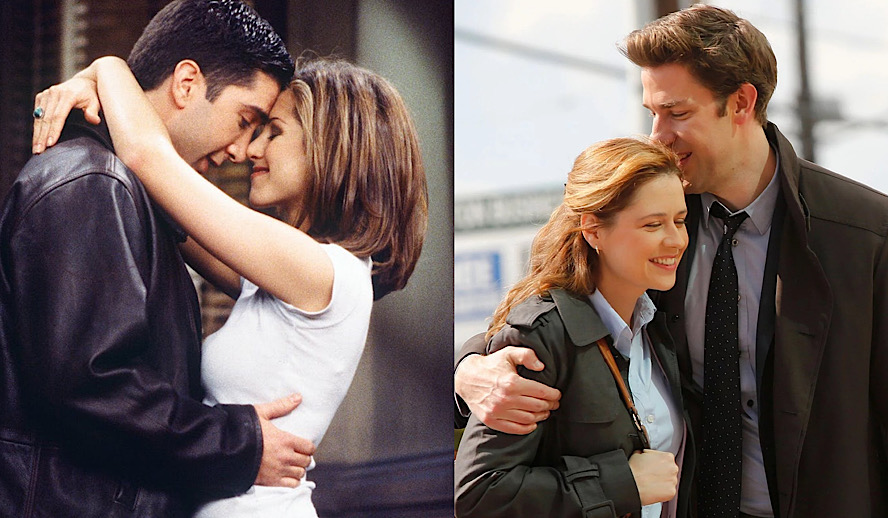 For generations, people have tried to figure out the answer to the biggest dilemma of modern times. It has led to divided households, friend fighting friend and brother fighting brother. I write this article to end the debate once and for all and give an answer to the great question: who is a better couple: Ross and Rachel or Jim and Pam?

‘Friends’ took a generation of sitcom fans by storm. For years, if you didn’t know which of the five friends you were most like, people assumed you’d either just woken up from a coma or had taken residence under a rock for the past decade. It was sinful to hear the first line of the theme song without clapping thrice immediately afterward. ‘Friends’ had taken the world by storm because of its relatable premise and lovably flawed cast of characters. Five friends hanging out in a coffee shop getting into hijinks: what’s not to love? And at the emotional center of this post-high school clique was Ross and Rachel. Ross and Rachel made up the will they or won’t they couple of the century, and everyone was obsessed with tuning in every week to see what twists and turns the relationship would take in this installment.

Less than a  year after the finale of ‘Friends’, another generation-defining sitcom premiered, this one centering around the work-life of people employed at a paper company. This show with the most enthralling premise of any show in history was called ‘The Office.’ While the main character was an attention-stealing goofball who created cringe-worthy situations wherever he went, everyone’s eyes were on Jim and Pam. Jim and Pam was the adorkable romance of the decade. They were so obviously perfect together and all the fans watched eagerly to see them end up together.

The Will They or Won’t They Factor: How Well Did Writers Keep Audiences Clinging to Their Seat Wondering What Would Happen Next With the Relationship

Ross and Rachel were on and off throughout all ten seasons of ‘Friends’. There were times when they were inseparable, there were times when they WERE ON A BREAK!!!!, and there was that confusing period when Rachel dated Joey. This created a high level of suspense which writers managed to keep fresh over ten seasons. Viewers never knew what would happen next which kept everyone wanting more.

Jim and Pam started out as two BFFs who both crushed on each other. Unfortunately, Pam began the series engaged to another man. It was agonizing to see Jim watch Roy and Pam flirt with each other when Jim and Pam were meant to be. Eventually, Jim couldn’t take the emotional toll of watching the love of his life give another man love anymore so he moved to Connecticut. Midway through season three, Jim moves back to Scranton but brings along a girlfriend who, fans couldn’t help but notice, wasn’t Pam. And then Jim interviews for a job in New York. Up until this point, Jim and Pam had audience eyes glued to the screen. The suspense of them always almost realizing their love for one another but constantly suppressing their feelings for each other was almost too much to bear.

Ross and Rachel VS. Jim and Pam

Then, after three seasons of will they or won’t they, Jim realizes he’s incomplete without Pam, drives home from his interview, and finally asks her out. Those were an amazing three seasons of suspense but… where do we go from here? We’ve still got six seasons left of ‘The Office.’ Writers could have made some daring choices with the relationship over the remaining seasons, but instead, the storyline was kept stagnant. Suddenly, the tension has completely disappeared.

Yeah, they’re a cute couple who get into hijinks together but there’s not much excitement in watching the relationship after season 3. From there, Jim and Pam’s relationship takes predictable twists and turns; they get married, have kids, buy a house. Basically, everything stays the same until the last couple of seasons when Jim and his friends start up a company in Philly. But at that point, audiences felt so used to Jim and Pam being happy the way things were, the plot point of Jim’s restlessness seemed to come out of left field. So I have to give this one to Ross and Rachel.

The Battle of Cuteness: Which Couple Makes the Audience Sigh, “Awwwwe…”

Both couples represent the age-old rom-com trope of falling in love with one’s best friend. So they’re both pretty adorable right off the bat. Both couples are cute and funny when they get lovey-dovey with each other but, I have to give this one to Jim and Pam. It’s not Ross and Rachel’s fault though. Jim and Pam have the added benefit of being in a mockumentary TV show so we can see them gushing over each other when there is no one else around. But on top of that, it’s the little things.

The constant joking around together, the grilled cheeses they shared on the roof of the Scranton business park, the fact that Pam fell in love with Jim when he warned her that the mixed berry yogurt she was about to eat had expired. I’m sorry, Ross and Rachel could never live up to the adorableness of Jim and Pam. I dare say that even the cutest of cat memes could never come close.

The Chemistry Test: Which Couple is More Perfect Together?

Ross and Rachel and their on and off relationship keeps fans interested, but are they really so great for each other. Rachel loves fashion which Ross has proven multiple times to have absolutely no interest in or knowledge of. Ross loves science and paleontology which Rachel often makes fun of him for. There are a couple of big romantic gestures between the two of them culminating in the ultimate romantic gesture when Ross stops Rachel from going to her dream job in Paris so they could be together. I know what you ‘Friends’ fans are thinking: “Well, if you put it that way…” But it is true. Rachel was about to fly out and accomplish all of her dreams in the fashion capital of the world but Ross can’t let her go because he wants to be with her. Clearly, these two are not on the same wavelength.

Jim and Pam clearly have things in common from the beginning. They both want to find lives for themselves outside of the Dunder-Mifflin office. They are two of the few sane people in the office. And, perhaps most importantly, they share a passionate love for shenanigans and mischief. These things are all threads that Jim and Pam bond over throughout the course of the series and they’re what make Jim and Pam such a lovable couple. They share a similar dilemma to Ross and Rachel’s Paris debacle in the final season of ‘The Office’.

Jim wants to move to Philly and start a company while Pam wants to keep her roots planted in Scranton. And sure, the Philly controversy has been widely criticized by fans, even being called “The Office’s jumping the shark moment.” But hear me out. Instead of a big romantic gesture, the audience watches Jim and Pam work it out practically together. They fight in an unsexy manner, they compromise, and they ultimately work it out. This brings an air of realism to their relationship that makes the couple and the show so relatable. So I can’t help but give this point to Jim and Pam.