Euphoria vs Degrassi: Different Ways to Tell Stories about Teenagers 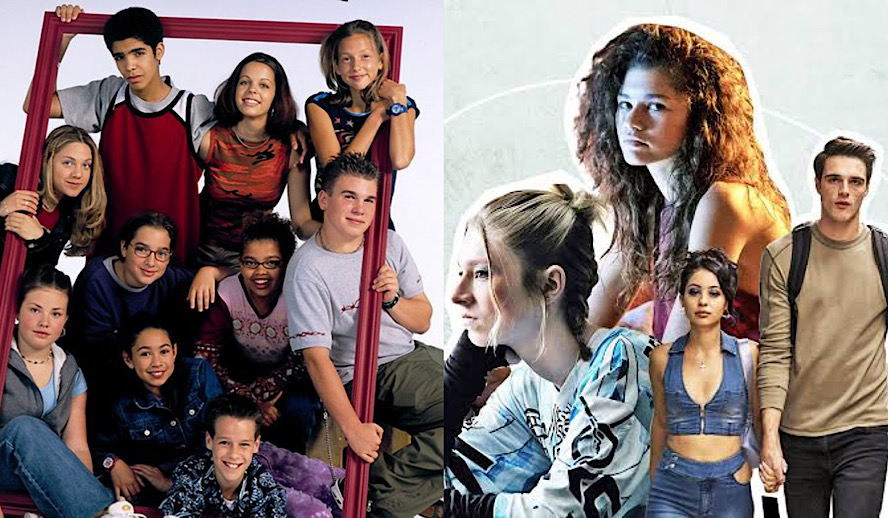 Since HBO announced a new ‘Degrassi’ series, fans of the show are nervous but eager for the show’s return. However, ‘Euphoria’ fans are already comparing the two, many saying ‘Degrassi’ paved the way for ‘Euphoria’ or that the show is going take ‘Euphoria’s’ crown as the best young adult drama on the platform. We know Hollywood thrives on nostalgia so ‘Degrassi’ isn’t going to fail in any way but fans of the show are worried that the show is going to be more intense because it’s going to be on the HBO Max platform.

Degrassi Walked so Euphoria can Run

‘Degrassi’ was a groundbreaking show that started airing in the 80s and its main focus was to be a diverse teen drama about topics like sex, teen pregnancy, mental health, drug abuse, and more.  However, what we’re going to focus on is ‘Degrassi: The Next Generation’ which ran from 2001 to 2015 and aired on TeenNick. The show had soap opera format with an A, B, and C plot: With the A plot being the main storyline driven by a single character, B plot often comedic is slightly intertwined with the other stories moving them forward, C plot was used sporadically in season-long arcs but was now used for comedic relief.

The teen drama was a critical success among teens because the cast looked like them and that’s what made Degrassi stand out compared to other shows meant for teens. The show wanted to compete with ‘Buffy the Vampire Slayer’ and ‘Dawson’s Creek’, which had actors in their twenties play teenagers. Eleven children were cast that portrayed the different types of kids you’ll see in middle and high school like the bully, class clown, nerds, popular girls, and popular sports boys. ‘Degrassi’ will often introduce younger characters into the show once the other characters get older and this kept the show going for 14 seasons.

Euphoria Vs Degrassi: Can’t Be Compared

The show paved the way for ‘Euphoria’ because it talked about serious topics in a PG way while ‘Euphoria’ talks about the same topics but is more graphic because it’s made for young adults instead of teenagers. These two shows have been compared to each other because of the way they handle serious topics. However, these dramas can’t be compared because one is for kids and one is for young adults. The ‘Euphoria’ cast is all in their twenties and the teenagers in the show aren’t in school much because the topics it focuses on are sex, identity, trauma, friendships, and love.

‘Degrassi’ touched on more social issues than ‘Euphoria’ but it had more characters which allowed them to give more problems to the teenagers. The drama in the show isn’t unrealistic in a way that takes the audience out of the show because the show is about kids in high school and their problems. While ‘Euphoria’ follows a group of teenagers and their trauma is the focus this makes it more relatable to the audience, who are young adults, who reflect on their teenage years. The audience can understand why the characters act the way they do because they acted the same way back when they were in high school. Meanwhile, the audience for ‘Degrassi’ can relate to the characters because they’re experiencing the same problems as the characters.

When ‘Degrassi’ Arrives on HBO then Let’s Compare

The reboot of ‘Degrassi’ is set to premiere on HBO in 2023 and it will feature 10 episodes that are an hour, also all 14 seasons of ‘Degrassi: Next Generation’ will be available in spring 2022. It’s safe to assume that this series will target the young adult audience because of the success of ‘Euphoria’, HBO Max wants the attention of the generation who watched ‘Degrassi’ who are now old enough to understand the complex social issues of today. The show is going to be a guaranteed success because reboots tend to watchers no matter how good or bad it is.

If the reboot goes the same route as ‘Euphoria’ by being more graphic about the teenagers’ issues then the two will be comparable because they will be on the same level. Fans of

‘Degrassi Expressed on Twitter that the show will blow ‘Euphoria’ out the park because the show was already intense on TeenNick, with it being on HBO, the show will be able to do more and show more. Twitter users expressed that there should be a crossover in the two shows to show how intense the teens in ‘Degrassi’ are compared to the ‘Euphoria’ teens.

I’m interested in how the reboot will go because if the reboot is meant to be on the same level as ‘Euphoria’, it’s going to be really graphic. HBO is known for its graphic content mostly because of the nudity and I’m sure the reboot will take advantage of that. If the show gets a great group of writers, this show could be a success and will continue the ‘Degrassi’ legacy. Also, if they continue to tackle social issues, it can be really impactful like the previous seasons. The show’s casting can also be better than ‘Euphoria’s’ cast if they make their cast more diverse. The reboot will be produced by Julia Cohen of ‘Riverdale’ and Lara Azzopardi of ‘The Bold Type’.