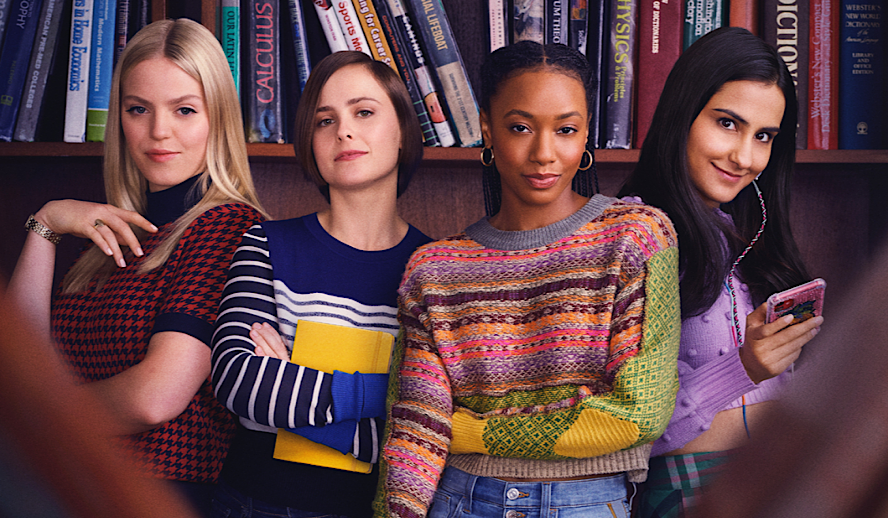 Mindy Kaling has always inspired me, and not just because of her genius delivery of lines like, “My resolution was to get more attention,” as Kelly Kapoor in ‘The Office’. It’s because of what she’s done since then; ‘The Mindy Project’ still makes me laugh even though I’ve seen every episode, her new young adult Netflix show ‘Never Have I Ever’, the film ‘Late Night’ speaking from experience as a woman in a male dominated industry.

Mainly I think the reason I admire her so much is because of something that I read in one of her memoirs. She talked about her writing process, and that her working often looks like sitting in her underwear in her room and writing an episode for days at a time. When I think about my own career, I always picture myself as she describes herself; sitting in her room writing about fictional, deeply flawed people who make me laugh and make me root for them all at the same time. Thank goodness there’s now another example of this type of show as I continue to shape my life around this one line in her book.

On November 18th, HBO Max released the first two episodes of ‘The Sex Lives Of College Girls’ and three new episodes will follow every week for a total of 10 episodes. Co-created by Mindy Kaling and Justin Noble (‘Never Have I Ever’) and wrote alongside Rupinder Gill and Vanessa Baden. The show follows four suitemates entering their freshman year of college who are adjusting to their newfound independence: Kimberly (Pauline Chalamet), Bela (Amrit Kaur), Leighton (Reneé Rapp), and Whitney (Alya Chanelle Scott). They work as a hilarious ensemble, balancing each other out while creating humor in their natural differences. both in their varied racial, socio-economic and educational backgrounds as well as their general clashing personalities.”We stacked our writers’ room with truly incredible staff that is almost entirely female – all different ages, all different walks of life. They were all brilliant and so smart and funny and great and they contributed to each of these characters and such huge ways,” said Nobel in a TCA panel according to Refinery29.

It’s one of Kaling’s raunchiest projects to date but the challenge excited the writer. “It’s called ‘The Sex Lives Of College Girls’ because they’re preoccupied with that part, but it’s also about fitting in. It’s about their romantic lives, familial lives. It was challenging and definitely out of my comfort zone to write about sex and sexy situations. That’s why it was a great time to do it,” said Kaling to AV Club.

Her most recent work is Netflix’s ‘Never Have I Ever’, a young adult comedy that acted as Kaling’s transition into writing from a teenager perspective. The show, not unlike ‘The Sex Lives of College Girls’, contains Kaling’s trademark witty responses and is chock-full of pop culture references. As someone who also annoys my friends with my constant referencing of television shows and celebrity gossip, I find this to be accurate.

Friendship Between Four Unlikely Friends- Nothing New But Always Satisfying

While the premise of the show is not necessarily groundbreaking, it is one of the few shows that explore college life. Of those shows, even fewer are explored through the lens of female identity. The heart of the show is the chemistry between the four roommates, who although are drastically different each hold their own comedic weight. Kaling said to AV Club, “We wanted four people who were very, very different on paper, and would never choose to live together. As you can probably tell from the projects I work on, I wanted four women with really big personalities, wants, and ambitions. It felt like throwing them together, seeing all their conflict, the places where they aligned, all of that would be conducive to comedy.”

Kimberly is a naive and awkward valedictorian from a small town in Arizona. She’s gone from being the smartest in her class to struggling to keep up with the other kids.

Leighton is a New York legacy student which The Guardian describes as “a mashup of Blair Waldorf and Regina George (who Rapp played in the Broadway adaptation of ‘Mean Girls’)”. But while she may seem ultra-confident, she is struggling to accept her sexuality behind closed doors.

Whitney is the soccer-star daughter of a US senator and struggles with the predominantly white environment. as well as hiding her affair with her assistant coach.

‘The Sex Lives of College Girls’

My favorite character so far though is Bela, an overly eager comedy fan who wants to be on the school’s elite humor magazine and to experience college as fully as possible. She is down for whatever, including a “naked party” and spray painting way-too-many abs to prepare, which makes her both an incredibly endearing and cringeworthy as a character.

While some think that her pulling away from her conservative Indian parents is a reflection of Kaling’s own time at her Ivy League college. However, Kaling describes herself as “sexually repressed” while Bela is enthusiastically excited to try all things. However, some of the struggles like trying to break into a male-dominated industry, are perhaps more personal. Elle reviewed the show, saying, “Despite its too-literal title, the series is a charming, even insightful look into the chaotic world of higher education, in which ever-shuffling priorities stir up a heady brew.”

The female perspective has only recently started to be explored in the world of television and film. For many places, female-driven stories were difficult to get made because they felt like they were not interesting, not funny, or not worth telling. Mindy Kaling, as well as her team of diverse writers, has a distinct influence as a woman of color in the entertainment industry.

Stories told can work as an educational tool and accurate representation of microaggressions and painful discrimination. “It used to be that you had to make female TV characters perfect so no one would be offended by your ‘portrayal’ of women. Even when I started out on The Office… we could write our male characters funny and flawed, but not the women. And now, thankfully, it’s completely different,” said Kaling according to Screen Craft.

Since shows about women and female friendship are few and far between, having depictions of girls being not ideally feminine is hard to come by. Whether you are ready to believe it or not, women are gross, awkward, insecure, and deeply flawed. This does not mean that those same women are not also smart, funny, and ambitious. “Amid the jokes and uncomfortable situations (including a positively cringe-worthy dinner during parents’ weekend in a later episode), there’s an almost palpable sense of the desperate desire to fit in, as well as how significant the college years are in defining people as they mature. In that sense, ‘The Sex Lives of College Girls’ is a rather simplistic, marketing-friendly title for a show that’s refreshingly about a lot more than that,” said CNN.

While the show is not high concept or revolutionary, the sense of camaraderie between the women and even having a show that is about young women is a way of saying that young women’s stories are worth listening to. They are exciting, they are gross, they are flawed, and they are learning. It is respecting their existence as is, and that can be life-changing for all.