Rue and Cassie Are Reaching Their Own Rock Bottom: Euphoria Season 2 Episode 2 and 3 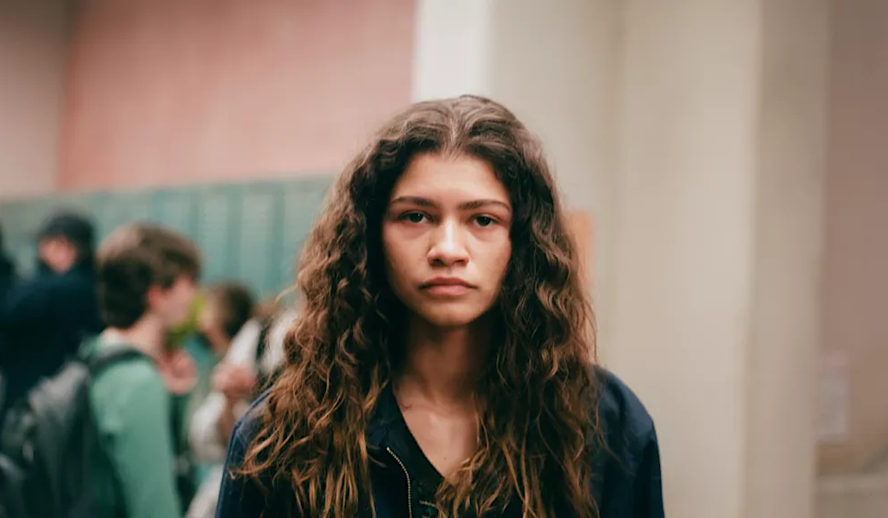 It’s clear that ‘Euphoria’ season 2 has turned its focus anyway for making character-centric episodes instead they’re moving the plot along with Nate’s Dad Cal (Eric Dane), Fezco (Angus Cloud), Cassie (Sydney Sweeny), Nate (Jacob Eldori), and Rue (Zendaya). For the rest of the characters, they seem to be pushed aside this season, especially with Kat (Barbie Ferreira). I know a show with an ensemble cast like ‘Euphoria’ can have trouble giving all the characters an important role in the story but since we’re still early in the new season, we’ll just have to wait to see what’s in store for the characters.

Episode 2 “Out of Touch” moves the teenager’s relationships forward, as we see Maddy (Alexa Demie) and Cassie be at the side of badly beaten Nate, a result from the ending of the first episode. From the start of the episode, we get a feeling that this episode is going to be fast-paced. Even Nate’s daydream sequence has blink then you’ll miss it moment, honestly too many things are going on in this episode. Cassie spends most of the episode stressing about Maddy finding out her “situationship” with Nate. Meanwhile, Cal is trying to figure out who hurt his child, so he spends the episode following Lexie around hoping it will lead to the culprit. The episode continues with Jule’s being jealous of Rue and Elliot’s relationship because Rue was acting weird when talking about the night they met. Then finally Kat is feeling depressed about her relationship with Ethan, and we get a fanfiction daydream sex scene.

All these plots in a single episode could’ve been split up among episodes, for example, have Rue (this includes Jules (Hunter Schafer)) and Nate’s (this includes Cassie) plot be done together in one episode then Maddy and Kat’s in another. The reason I put these characters together is that Rue and Nate move the main plot along while Maddy and Kate’s episodes can be more drama-heavy instead of them being side-characters. This wouldn’t be an issue if Kat and Maddy didn’t have major arcs in the first season, but I’m still excited to see where their arcs will go because they’re the only two characters who don’t stress me out when on screen.

In episode 3 “Ruminations: Big and Little Bullys” we get Cal’s backstory, also I should mention out of all the parents in the show Cal is the only one that gets a storyline. In season one, we learn that Cal has a second life and this episode reveals that his entire adult life is a lie. Cal’s backstory gets the audience to understand Cal’s actions in the present day but as an audience, we have to remember Cal has done terrible things. However, his backstory feels like a tragic love story because he was in love with his best friend but he couldn’t be with so he pushed that part himself down until it turned into toxic masculinity.

However, this backstory was so well done it felt like a short film because of the music and the chemistry between young Cal (Elias Kacavas) and his high school best friend, Derek (Henry Eikenberry) was perfect, it was a great start to the episode. Then we get back to the present day where Rue is high and we get “professor Rue back” she gives us a lesson on how to be a successful drug addict with Elliot helping her switch the slides which include how to gaslight someone. Her sister Gia really just wants Rue to recover from her addiction because she loves her but Rue is an addict and she only cares about drugs.

Lexie (Maude Apatow) gets a 4th wall break and she explains she’s tired of being a side character in her own life which is funny because fans of the show have been wanting a Lexi-centric episode and she still doesn’t have one. I’m one of those fans who want a Lexie episode because I want to see how she juggles the chaos around her, we do get a peek of how she deals with it all and it involves daydreaming. This episode is better-paced than the last one and I can tell because of the audience reaction saying that this episode is boring. This episode gave me a chance to breathe and fully take in the plot before the chaos happens again because it’s coming.

Season 2 is the Ball, Rue and Cassie are Indiana Jones

Now let’s talk about how Cassie and Rue are at their lowest, Cassie wanting male validation has led her to be desperate for Nate’s attention, and Rue pushing everyone she loves away because of her drug addiction. This is really upsetting watching them lose themselves, you know they can do better but they want to want it for themselves and not anyone else. In episode 2, Cassie is on the verge of a nervous breakdown because she wants to be in a relationship with Nate however, Nate only wants her for sex and doesn’t want to be seen with her at school.

It honestly gave me second-hand embarrassment watching Cassie be so desperate because, in high school, you chase after the boy to the lengths of changing yourself for him. You don’t realize at the moment that what you’re doing only kills your self-esteem and it’s clear that Cassie only gets in relationships because that’s the only way she can love herself. Without a guy complimenting her and validating her looks constantly, she feels worthless.

Rue is isolating herself and putting herself at risk to get drugs and it’s very hard to watch. You can see that Rues doesn’t care about anything and that includes herself, she’s now at the point where she wants to deal drugs in order to pay for them. We know as the audience that this is going to go horribly wrong for Rue because she’s an addict and being self-destructive. Rue isn’t clearly thinking how this could put her friends and family in danger, it’s not going to affect her until she loses someone in her life that cares about her because of her actions. It’s devastating to see Rue go down this path but it’s the reality for addicts. I don’t think ‘Euphoria’ is glorifying drugs in any way because it’s showing the harsh reality of what being a drug addict does to a person.

I think a fair thing to say is that somebody is going to hurt this season and that can mean anything at this point. I know season two is going to be darker than season one because this show isn’t the one to leave you with a happy ending. Rue isn’t going to magically get better by the end of this season, she’s going to do what it takes to sell drugs so she’ll be able to take them. She is going to end up hurting the people around her and it’s going to be hard to watch. As much as I want Cassie to stop chasing after Nate so she doesn’t lose her relationship with Maddy, it’s inevitable that Maddy is going to find out and that’s going to cause Cassie to hate herself more. However, that’s ‘Euphoria’ so I’m going to expect to be shocked by the end of the season and that makes me anticipate watching the new episodes.