‘The Umbrella Academy’: Season 3 Is A Strange Yet Fun Ride 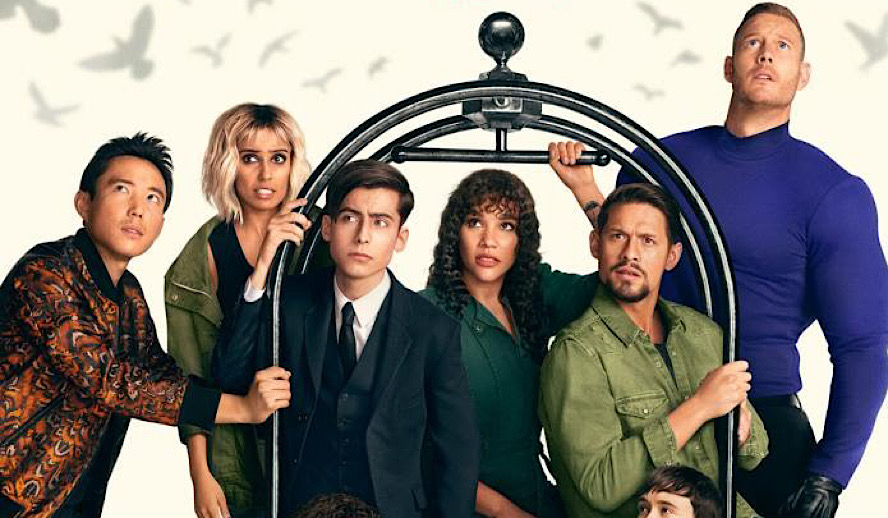 ‘The Umbrella Academy’ has just dropped its third season – and boy-oh-boy is there a lot to it. Beginning in early 2019, ‘The Umbrella Academy’ premiered as a Netflix adaptation of the comic book series of the same name, written by My Chemical Romance vocalist, Gerard Way, and illustrated by Gabriel Bá. The story centers around seven adopted siblings, each with their own superpower. We get to follow this family of dysfunction as they encounter multiple versions of the apocalypse and other catastrophic happenings. They also have to deal with themselves and each other as each new threat pushes them to work together and overcome their childhood traumas.

The end of season two saw the characters return to their former home, only it wasn’t their home anymore. Instead of their father adopting them as the Umbrella Academy, he has a new set of superpowered children, the Sparrow Academy. As the third season begins, a new catastrophe invades the world, and the umbrellas dish it out with the sparrows, though they are stuck between hating and possibly needing their enemies to save the world. It’s a season filled with many emotions and questions as loyalties are tested and lives are on the line.

A Strange Show for a Strange Time

If ‘The Umbrella Academy’ is anything, it’s strange. From the mystery surrounding the characters’ birth and powers to the human-like chimpanzee, Pogo, who helps look after them, there’s a distinctive style and acquired taste that accompanies the show. It demonstrates what type of show it is from the beginning, letting everyone know they’re in for this strange ride. That strange ride may not adhere to everyone’s wishes for a show, but sometimes, people need a change of pace in their life. It’s also just fun. The first ten minutes of the new season prove just how fun that ride can be.

There’s so much content out in the media nowadays, so it’s impressive for a series to be able to stand out this much. And it stands out because it’s strange. It’s clear that ‘The Umbrella Academy’ has a place in the modern streaming service era. It’s a superhero show, unlike any other current superhero show, as the powers are less important than the characters themselves. Add in a killer soundtrack and multiple mind-bending reveals, and it’s clear why this show deserves to be popular. ‘The Umbrella Academy’ has a place in the world because of its originality and unapologetic identity. It’s weird and it’s going to let itself be weird. But it also includes many heartfelt relationships and moments, and at its core, it’s about the central family.

‘The Umbrella Academy’ – What Does Season Three Bring to the Table?

Third seasons are generally impressive because both the writers and the audience have a full grasp of the world, the characters, and the identity of the show. This particular season doesn’t necessarily stand out against the others, but it does profit off of a previous understanding for the show’s assets. This season has an upped maturity level, with some harsher language and some more gore. The performances are always solid. All of the main cast play off of each other really well, as they always have. It’s easy to care about these characters, and we need to care if we’re going to follow them. Emmy Raver-Lampman as Allison Hargreeves particularly stands out with her performance. Allison is taken to a rawer and darker place this time around, and though that makes her lose her likability factor with some, Raver-Lampman handles this arc with skill and dedication.

There are also a ton of new characters. The Sparrow Academy is filled with new personalities and powers introduced this season. Javon ‘Wanna’ Walton, who audiences can recognize as Ashtray from ‘Euphoria,’ joins the cast this season and adds some fun, though his character is, unfortunately, kind of pushed to the side once he serves his purpose. The dialogue is always spunky and balances between the characters’ fun banter with each other and more serious moments.

The main fault with season three lies with it feeling overstuffed. There’s a sensory and plot overload that comes with all the new characters and all the new chaos of saving the world again. The show is already strange and sometimes confusing, so filling it up too much may surpass its limit for certain viewers. There are many plotlines and details that feel like they get lost amongst the massiveness of everything, which is a shame because those elements have obviously been intricately woven in to deepen the world of the show. It’s up to the individual viewer as to whether the larger size of the plotlines is too much or just right.

Everyone Loves a Dysfunctional Family

My favorite episode this season was episode eight entitled: ‘Wedding at the End of the World.’ The title gives some things away, but the episode itself stood out because it was able to momentarily step away from all the chaos and give us these intimate character moments. The episode still pushed the plot forward, but it let the plot stay in the background and brought the character relationships to the front. The strongest point of this show, and many others, is the characters. They’re all so unique and so clearly themselves. The more time we spend with this family, the more we care about them.

As previously mentioned, the core of this show is the family. We need the characters to succeed on their missions, but more importantly, we need them to succeed together. Dysfunctional families are favored in the media because every family is dysfunctional in one way or another, and not every family is biological. Watching a bunch of siblings gets along as they eat dinner together would be unrealistic and less entertaining. The Hargreeves’ siblings know how to tear each other down and lift each other up. They also have powers, so that gives their family fights a little more flavor. At the end of the day, they’re there for each other and they’d do anything for one another, despite all of the dysfunction. It’s a relationship dynamic that always wins, and it’s the heart of ‘The Umbrella Academy.’ This heart is what’s going to make audiences come back if/when the next season comes around.

Based on: Eisner award-winning comics and graphic novels created and written by Gerard Way (My Chemical Romance), illustrated by Gabriel Bá, and published by Dark Horse Comics.