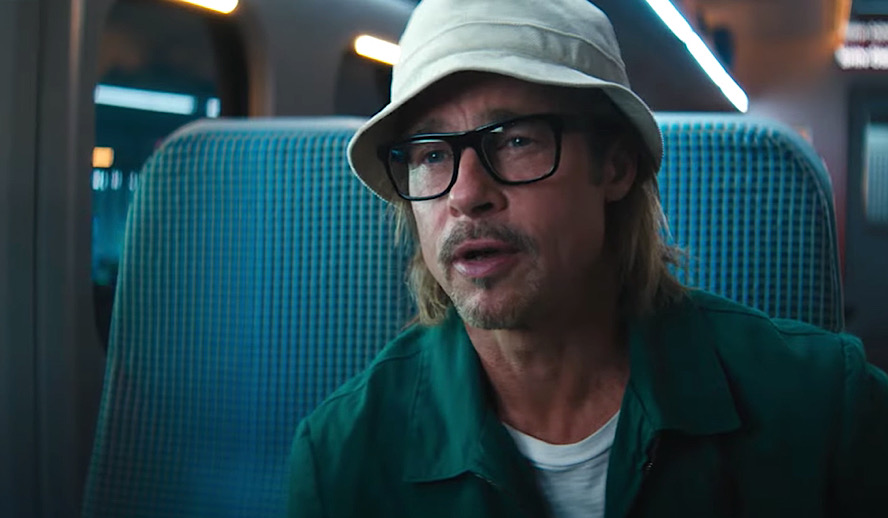 ‘Bullet Train’ is an upcoming action comedy film about a “trained killer Ladybug (Brad Pitt) who wants to give up the life but is pulled back in by his handler Maria Beetle (Sandra Bullock) in order to collect a briefcase on a bullet train heading from Tokyo to Morioka. Once on board, he and the other competing assassins onboard discover that their objectives are all connected” according to Entertainment Weekly. The film is directed by David Leitch and is based on a Japanese novel ‘Maria Beetle’ published in English as ‘Bullet Train’ by Kōtarō Isaka.

‘Bullet Train’ – What We Know So Far

The first trailer for ‘Bullet Train’ shows Pitt fighting other assassins on the locomotive who have similar missions as Pitt. Part of the fun that this film has is figuring out what the assassin’s objective is because each one has a purpose. This film has an ensemble cast that includes Brad Pitt, Sandra Bullock, Joey King, Logan Lerman, Bad Bunny, Brian Tyree Henry, Hiroyuki Sanada, Masi Oka, Andrew Koji, Aaron Taylor-Johnson, and Zazie Beetz.

Pitt is playing Ladybug, which is a code name for Nanano, an assassin with bad luck, which is pretty odd because ladybugs are known for good luck. King is playing Prince and has been gender-swapped from the book, she poses as an innocent schoolgirl that is a psychopath on the inside and has a way of manipulating everyone around her. Taylor-Johnson will play Tangerine who is one-half of a pair of assassins along with Lemon played by Brian Tyree Henry. Koji is playing Yuichi Kimura who is on board the train to avenge his son. Lady Gaga was originally going to play Maria Beetle but had scheduling conflicts with ‘House of Gucci’.

Sony is hoping that ‘Bullet Train’ can be the start of a new successful franchise and from the reactions of the trailer, Sony can have a successful film on their hands. The trailer shows Pitt fighting other assassins with the song “Stayin Alive” covered by The Bees Gees playing in the background and it really sets the tone of what this film is going to be. However, some people have expressed confusion since there’s a significant number of white actors and the film is based on a Japanese book. It shouldn’t be much of an issue since the codenames in the book are ethnically ambiguous but we’ll have to wait to see.

The Tone of The Film

Originally the film was supposed to have a darker tone but as filming went on, the actors started to have more fun with it and turned it into an action comedy film. I think the film is basically going to be like a fun ‘John Wick’ film because of the neon-noir aesthetic and the situations the characters will get into. I didn’t know the film existed until I saw the trailer and was immediately hooked because I like fast-paced fun action films and also I was surprised to see Brad Pitt playing the main character. I do think Sony has a successful film on its hands because who doesn’t love a good action comedy film it’s a break from all the superhero films that are releasing this year. Most people are excited about this film because they get to see Brad Pitt fight famous musician Bad Bunny on the big screen which is great for Sony because Bad Bunny fans will fill those theater seats.

If you’re not able to catch it in theaters then don’t worry the film will head to Netflix in the United States due to Sony making a deal with the streaming service back in 2021. The deal is Netflix will be getting Sony Pictures movies from 2022 for five years and this means six months after Bullet Train’s theatrical release, it will be heading to Netflix. I believe that Sony made a deal with Netflix to compete in the streaming service wars which I think is great because you’ll be able to watch the films without waiting for the DVD release. Streaming services having films be available on their platforms will definitely change the industry in a good way if they can handle it properly.

‘Bullet Train’ can be tied to ‘John Wick’ because the co-director of the first ‘John Wick’ film is the director of this action-comedy, David Leitch. The film is similar to Keanu Reeves’s assassin film where assassins are fighting each other while going after something bigger. This film can take ‘John Wicks’ place as the next action film people have to see if they have memorable fight scenes and dialogue. I think what made ‘John Wick’ successful is how memorable the story was and who John Wick is as a character, if Pitt can pull off his character, I would want to see a sequel of ‘Bullet Train’.

Like I said in the previous paragraph, this film has stars that will definitely bring people to watch the film. Also, during the filming Pitt did most of his stunts, according to Vulture, the second unit director, and stunt coordinator Greg Rementer, said that “Brad did 95 percent of his physical stunts — the fighting,” and continued on saying “He’s like a natural-born athlete. He really got in there!” Also, Brian Tyree Henry, Michael Shannon, Hiroyuki Sonada, Andrew Koji surprised Rementer by also performing their own stunts in the film.

I know the cast will be memorable because of the different traits the assassins have and if they’re liked by the audience, I can see spin-offs happening in the future. Earlier, I said I was surprised to see Brad Pitt as the main character because all I see is Pitt and not the character he’s playing. However, I know he’ll do a great job in this film because he did an amazing job in the Quentin Tarantino film ‘Once Upon a Time in… Hollywood’.