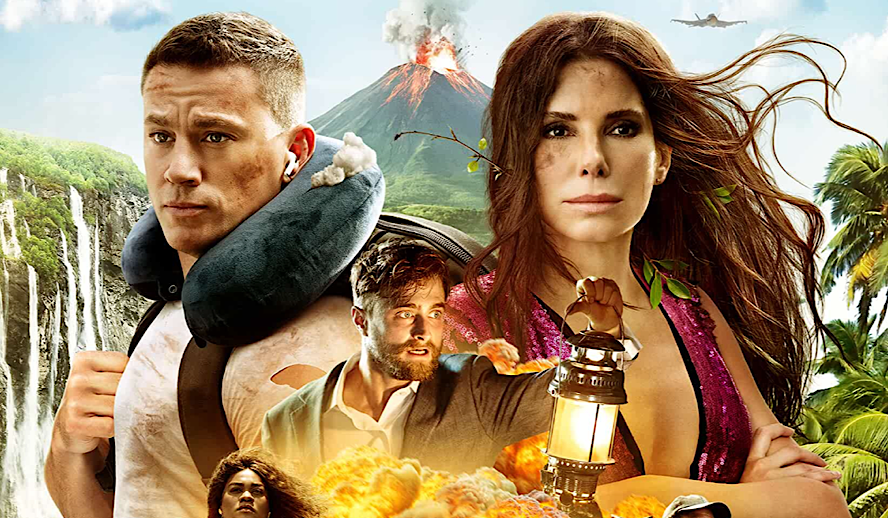 You’ll get that joke after you watch the movie. Without spoiling anything, it can disclose to you that ‘The Lost City’ is not ‘Romancing the Stone.’ It has a handful of references to the 1984 flick, including a pun on its title gracing a huge poster at the convention center where Loretta Sage (Sandra Bullock) kicks off her book tour, but only the premise is the same: a romance novelist winds up in the jungle due to a kidnapping, and winds up living out a story akin to one of her novels. That description is vague because that’s where the similarities end.

The story swerves in another direction pretty early in the film, when instead of Jack Trainer (Brad Pitt), the Jack Colton character, romancing the novelist, it’s Alan Caprison (Channing Tatum), her goofy cover model. The romance in ‘The Lost City’ winds up being about Alan helping Loretta to grieve her deceased husband and start her life again, and that dynamic creates the most sentimental moments in the movie.

They definitely kept it sexy, though. Riffing on ‘The Lost City of Z,’ the lost city in question is referred to as The Lost City of D because most people can’t pronounce its name. Let your brain run wild with that one; the writers certainly did. In ‘The Lost City,’ however, unlike ‘Romancing the Stone,’ the suggestive parts are goofy on the whole, always kept lighthearted with plenty of back-and-forth between Bullock and Tatum.

Forget what you may have heard. ‘The Lost City’ is neither a remake nor a retelling. It borrows a premise, runs in a different direction, and winds up being a whole lot sillier.

The Jock Defends the Schlock

Diminishing the character Alan Caprison to “the jock” means I probably deserve the same response he gives to Loretta Sage when she shares her ungenerous estimation of him: “I thought you, of all people, would know not to judge a book by its cover.” ‘The Lost City,’ however, holds exactly true to its cover. It’s a blockbuster adventure/rom-com with nothing particularly new or inspired to say, and it’s fun.

In the same scene that Alan delivers that cutting cliché, he defends Loretta’s books against her cynicism, saying that she shouldn’t demean the people who love her work by calling it “schlock.” Loretta has grown cold and indifferent after facing great loss, and she no longer has a sense of humor about her life or her work, just like audiences in a more serious-minded place may not have enough of a sense of humor about themselves to enjoy ‘The Lost City.’ If the movie has a thesis, it’s that schlocky entertainment still has a place in our lives and there’s no shame in that.

Related article: EVOLUTION: Every Sandra Bullock Role From 1987 to 2021, All Performances Exceptionally Poignant

The humor in the movie is often lowbrow, and the Nee Brothers (directors Aaron Nee and Adam Nee) give Bullock and Tatum room to linger almost uncomfortably long on the silliest, sultriest things so as to break down whatever cynicism you bring with you into the cinema. By the end of the film, the intent is for you to undergo the same loosening up that Loretta does. It’s not unlike a Hallmark movie in that way.

This is the title that Beth (Da’Vine Joy Randolph), Loretta’s publicist, winds up giving to Oscar (Oscar Nuñez), an infatuated pilot with a cargo hold full of animals. Both Da’Vine Joy Randolph and Oscar Nuñez are highlights in the film, and Randolph’s delivery of Beth’s monologue about wanting a break from her nonstop work-life is exactly the energy ‘The Lost City’ was made for.

Oscar wins Beth’s heart as a friend after initially coming off as a bit creepy, albeit hilarious. Though he’s not as creepy or strange as Oscar, Alan has to win Loretta’s heart because she’s far more intelligent than him and she has never seen him as more than her cover model. Perhaps their relationship never developed before their adventure because they have almost nothing in common. The romance in ‘The Lost City’ is most convincing when it involves the main couple helping one another overcome something. Alan helps Loretta to breathe and focus when she gets scared and ultimately helps her to let go of her lost love. Loretta helps Alan with his insecurity about his eczema. The question, then, is whether that adds up to romance.

The fact that they fall in love seems obliged by movie conventions, rather than organic. Bullock and Tatum do their best to sell it, but the script lacks anything romantic enough to bridge the differences between the characters, relying on genre expectations to do that job. A commercially riskier but more fitting plot would track Loretta and Alan’s budding friendship. Apart from the adventure itself, nothing goes beyond what good friends would do, and as we know from another Jack in another Sandra Bullock film: “relationships based on tense experiences never work” (‘Speed,’ 1994).

‘The Lost City’ is riddled with jokes and comedic comments, and in Hallmark fashion leans into the wholesome moments when they happen, but also haphazardly tracks an unconvincing adventure plot. The result is a confused tone.

This discord comes to the fore whenever Daniel Radcliffe is onscreen as Abigail Fairfax, the egomaniacal billionaire seeking to own something that no one else does. The bad guys never seem threatening, despite Abigail insisting that “this is real life” and not a Loretta Sage novel. It feels like they are living in a more thrilling movie where you’re not sure if the good guys will win, and this is definitely not that movie.

But again, ‘The Lost City’ on the whole is designed to be a comfort movie for when you’re in the mood to not think too hard or take yourself too seriously, so it’s up to you to know what you’re paying for.

Sandra Bullock and Brad Pitt will both star in David Leitch’s ‘Bullet Train’ this summer. Channing Tatum continues his hot streak, currently being attached to a number of projects in pre-production including another Magic Mike movie. Da’Vine Joy Randolph will feature in George C. Wolfe’s biopic about Bayard Rustin, and Daniel Radcliffe will play Weird Al in ‘Weird: The Al Yankovic Story.’