Ranked: Top 5 Episodes of ‘My Next Guest Needs No Introduction’ on Netflix 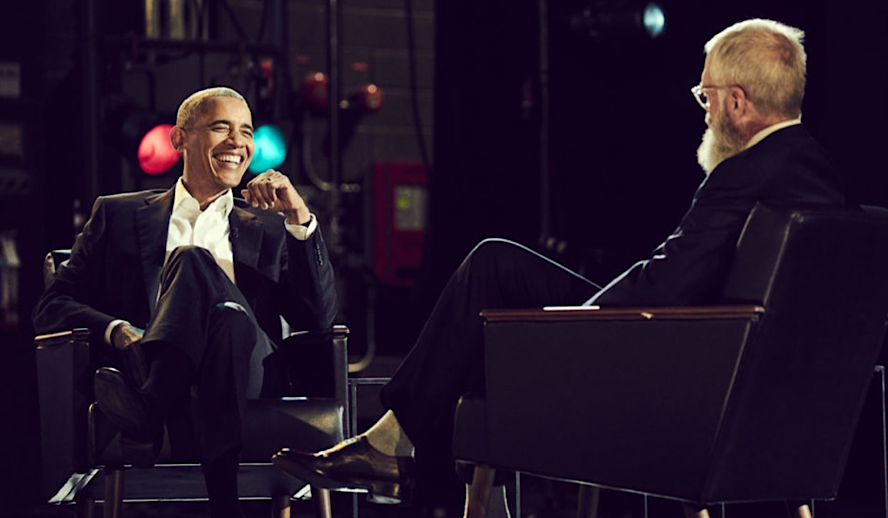 Photo: ‘My Next Guest Needs No Introduction’/Netflix

David Letterman’s ‘My Next Guest Needs No Introduction’: A Collection of Laughs, Insights, and Honest Journalism

Netflix’s popular series My Next Guest Needs No Introduction With David Letterman returned for a third season on October 21st, 2020, with a slate of new guests including Lizzo, Dave Chappelle, Robert Downey Jr., and Kim Kardashian West, adding an impressive roster to the show’s already star-studded history of guests. Letterman is no stranger to interviewing celebrities, actors, and politicians, as he did on shows like The David Letterman Show (1980), Late Night with David Letterman (1982-1993), and his most well-known role hosting Late Show with David Letterman (1993-2015). Winner of multiple Emmys, a Peabody Award, and the Mark Twain Prize for American Humor, Letterman is a natural talent, effortlessly fusing his interviews with humor, politics, and a sense of genuineness that disarms his guests and leads to refreshingly open conversations. Letterman continues to deliver laughs on My Next Guest just as he did when hosting Late Show, but his Netflix endeavor focuses more on in-depth and personal conversations, with Letterman often coming across more as a comedic journalist rather than a celebrity talk show host.

Although arguably every episode of My Next Guest is worth watching regardless of the guest’s notoriety (because some guests really do need an introduction), below are the five strongest episodes from the Netflix series thus far:

Shawn Corey Carter, known professionally as “JAY-Z”, with a discography of 13 solo albums, and winner of 22 GRAMMY awards (the most of any rap artist), sits with Letterman to talk about his troubled family upbringing (such as discussing his father’s absence and Jay’s early life of selling drugs), his mother’s difficult and beautiful journey toward accepting her own sexuality, the history of hip-hop and the rivalry between East Coast v. West Coast artists, as well as the two men’s highly publicized affairs. Jay’s descriptions of his early childhood, from selling drugs to learning about the power of language, telling Letterman “every free second I had, I was making, I was creating”, gives the viewer a deeper look into Jay’s early influences and work ethic as an artist and entertainer. The rapper’s political activism to empower and support Black artists and impoverished communities gives the audience a glimpse of the star’s beliefs outside of music, and his open discussion with Letterman about their respective marital turbulences are not only brutally honest but even inspiring to watch.

Letterman’s earnest desire to find commonality between JAY-Z and himself, two artists of different ages, talents, and color, is a well-crafted endeavor. Letterman’s skill in guiding the conversation, ranging in topics such as family and success, makes for a cerebral viewing experience. The episode is also intercut with Letterman’s visit to legendary music producer Rick Rubin’s Shangri-La recording studio in Malibu, where they discuss the history of the renowned location and the many artists who have recorded there, including Bob Dylan and JAY-Z himself.

Malala Yousafzai, a 23-year-old political activist from Pakistan, was infamously attacked by the Taliban when riding a school bus at the age of 15. She went on to win the Nobel Peace Prize at 17, for her contributions in the fight for universal education and women’s rights.

Although she admits to Letterman how she’s mostly known as “the girl who was shot by the Taliban”, her incredible life story, passionate activism, and inspiring accomplishments far outweigh her infamous incident. Letterman explores Yousafzai’s childhood in Pakistan, where she fought the Taliban regime’s oppression against women’s rights for education and independence, and how this made her a target of the terrorist organization even before she was attacked. She goes into detail about her outspokenness prior to her attack, how it simultaneously led to international recognition in addition to Taliban provocation, and how her family’s long line of educators served as her main source of influence for her fight toward universal education. The episode also features Yousafzai and Letterman’s tour of her University of Oxford’s campus, as well as Letterman sitting down with her father and discussing his own activism in the Yousafzai family.

Admittedly, much has already been said with and about former President Barack Obama. However, the episode’s focus on Obama’s life after his departure from the White House, his general thoughts on the Trump administration, and his perception of the younger generation’s growing political participation are what makes this interview worth the watch. Obama discusses his upbringing, his parents’ influence, and how his father’s absence and his mother’s perseverance shaped him over the course of his life. Letterman and Obama’s discussion on voter rights, and our country’s history of voter suppression, rings especially relevant to this year’s presidential election. Obama’s intelligence, his surprising wit, and comedic timing (a skill commonly rare for politicians), make Letterman’s conversation with the former president undeniably entertaining, moving, and informative, especially when looking back on the interview in the year 2020. The episode features a bittersweet conversation with the late Representative John Lewis, where he and Letterman visit the iconic Edmund Pettus Bridge in Selma, Alabama, and discuss Lewis’s incredible courage and contributions toward equality and justice in America.

Filmed during the current global health pandemic and nationwide protests, Letterman and Melissa Viviane Jefferson, professionally known as “Lizzo”, safely distance themselves at Lizzo’s home and discuss her gradual ascent to stardom. Their conversation is especially moving since Lizzo’s first televised performance was on Letterman’s own former Late Show in 2014. A three-time GRAMMY-winning artist, and Time Magazine 2019 “Entertainer of the Year”, Lizzo speaks of her childhood in Detroit, her family’s eventual move to Houston, the origins behind her unique love of flutes, and her relationship with the late artist Prince. Lizzo further opens up on her frustrations with people’s perceptions of her body, her initial shame of being a rapper who likes to play the flute and talks about her incredible commitment to performance and writing, a work ethic she’s lived by since her younger years as an unknown artist.

Lizzo’s musical prowess, confidence, and infectiously positive outlook on life are on full display throughout the episode, these qualities affirming her status as an undeniably remarkable person and artist. As Lizzo succinctly tells Letterman, “I’m an artist that makes music that makes people feel good.” The episode also features Letterman’s foray into studio recording, a tour of Lizzo’s exotic flute collection, and an unexpected duet between herself and Letterman.

Zach Galifianakis, famously known for his role in The Hangover films, and hosting the beloved comedic talk show Between Two Ferns With Zach Galifianakis, provides arguably the funniest episode of the Netflix series thus far. Filmed during a specialized Netflix event, Galifianakis tells Letterman of his childhood inspirations, including the miming husband and wife TV duo Shields and Yarnell from the 1970s, his childhood desire to somehow entertain others for a living, and his eventual move from a small town in North Carolina to New York City. In addition to the back and forth comedic rapport between himself and Letterman, Galifianakis’s hysterical behind-the-scenes stories from his Between Two Ferns talk show are wonderfully wild and undeniably the highlight of their conversation. This bonus episode of Season 2’s My Next Guest is a hilarious discussion between two friends and respected comedians, showcasing Galifianakis’s natural and effortless storytelling abilities, quick wit, and his simple skill of making people laugh.

A Show That Offers Something for Everyone

David Letterman’s Netflix talk show features guests ranging from politicians, activists, actors, and athletes, with the guests, more often than not, possessing a combination of these qualities. Whether a viewer is looking to laugh, become inspired, or simply learn something new about their idol, Netflix’s My Next Guest truly has something to offer for everyone. All three seasons of My Next Guest Needs No Introduction With David Letterman are now streaming on Netflix.