A Look Back at ‘Batman Returns’ 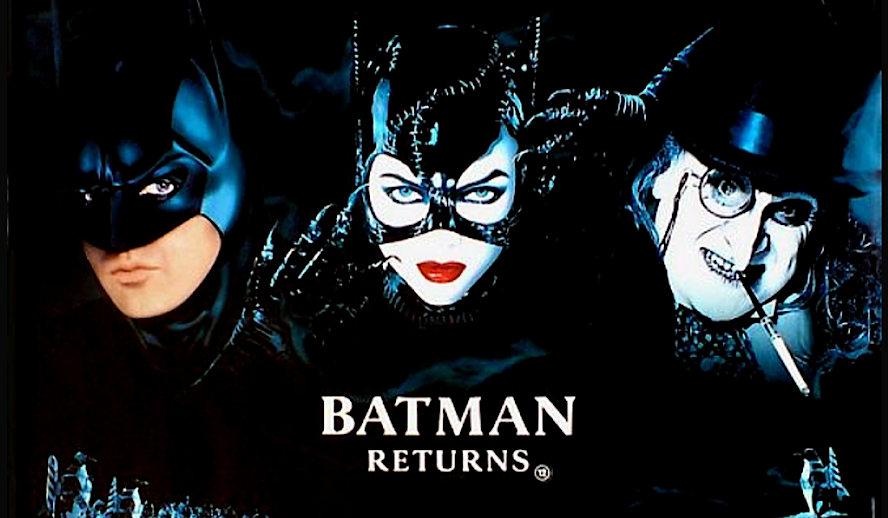 After the success of 1989’s ‘Batman’ starring Michael Keaton as the titular caped crusader, many were excited to see what Tim Burton had in store for his second Batman film. What many didn’t expect of the sequel, ‘Batman Returns’, was a darker and more surreal outing which is exactly what ‘Batman Returns’ is. 1992’s ‘Batman Returns’ is perhaps one of the most underrated superhero films, often being overlooked due to many believing that it is more of a Tim Burton film rather than a Batman vehicle. This aspect of the film actually works in its favor, showing how a skilled director can add their own signature spin to well-known properties, making them feel more unique and original. This unique feel sets ‘Batman Returns’ apart from other superhero films, making it both inventive and a true Tim Burton film.

‘Batman Returns’ as an Adaptation

‘Batman Returns’ follows Batman as he must face off against Catwoman (Michelle Pfeiffer) as he falls in love with her alter ego, Selina Kyle, while the Penguin (Danny DeVito) runs for mayor. The film may be different from the source material, but these differences overall help support the film’s story and have become influential in their own right.

In ‘Batman Returns’, the Penguin is different from the adaptations that have come before it. DeVito’s Penguin is a grotesque outsider, complete with flippers for hands and beak-like sharp teeth. Contrary, the original comics, and Adam West series portrayed the Penguin as a sophisticated thief, a human whose only penguin-like attributes were his height and long nose. Burton’s darker portrayal of the Penguin was so well received that future versions of the character, from the comics to ‘Batman: the Animated Series’, used Burton’s Penguin design so that the character now has flippers for hands. By attempting to make a villain in his signature dark style, Burton created an iconic character design that changed the course of how a popular character is portrayed.

Similarly, with Catwoman, Burton gives her a new origin story which gives her character new meaning. The comics never really had a clear origin story for Catwoman, with Frank Miller portraying her as an ex-prostitute and Jeph Loeb portraying her as a mobster’s daughter. Each writer has given Catwoman her own unique origin story and Tim Burton is no different. In Burton’s version, Selina Kyle is a timid woman who is killed by her corrupt boss, Max Shreck (Christopher Walken). She is soon revived by stray cats, thus becoming the brash and unhinged Catwoman. This origin story gives Catwoman a feminist edge that rings even truer today.

Selina Kyle being killed by her abusive male boss can easily be compared to the abuse of women employees that have come to the forefront thanks to the Me Too Movement. Selina, being revived and becoming Catwoman, can be seen as either a phoenix story where she rises from the abuse to become more powerful or it can be seen as a cautionary tale of how constant abuse can turn one into an unhinged version of their former self. Either interpretation, the origin story of Catwoman in ‘Batman Returns’ offers a fresh feminist take on the well-known character.

Then there is the titular man of the hour, Batman. Unlike Catwoman and Penguin, Burton keeps the main components of Batman’s origin story the same with the only major change (and quite major) being that the Joker (Jack Nicholson) shot Bruce Wayne’s parents when he was a young crook.

In terms of the style of Batman, Burton changed him in ways that we now associate with the character as his staples. Before Burton’s Batman films, Batman was going through a bit of an identity crisis. One minute he was portrayed as campy and goofy to appeal to children audiences, while the comics often portrayed him as more violent to appeal to adult audiences. Burton, on the other hand, portrayed Batman as more sorrowful. He still mourned the death of his parents and because of this, he was much more sullen and even broody. He was a mysterious billionaire with a long-lasting sadness in his eyes. This version of Batman has now become the staple of how Batman should be represented, as full of grief rather than goofy one-liners and as remorseful instead of just violent. Burton’s adaptation of a famous source material may have seemed different at the time but has since become staples for the beloved characters.

There is a common idea now that directors aren’t able to add their unique and signature style to superhero films out of fear that it will make the films less marketable. That there is a signature (and often basic) look and feel that all superhero films must abide by in order to be successful. In the case of ‘Batman Returns’, Tim Burton used the Batman mythos to showcase his dark and twisted signature style and as a result, many parents were upset at the film’s darker subject matter leading Joel Schumacher to direct the next Batman films. While showcasing his unique style may have had some consequences, Tim Burton’s style helps make ‘Batman Returns’ special.

Burton’s signature style of “fantastical creepiness” is seen throughout ‘Batman Returns’. Take the look of Gotham City, for example. While some iterations of Gotham City look like New York (looking at you, Christopher Nolan), Burton’s idea of Gotham City is something entirely different. Gotham City in ‘Batman Returns’ doesn’t look like New York but instead looks like something out of a German Expressionist film, complete with twisted skyscrapers straight out of ‘Metropolis’ and intimidatingly large statues. This unique style of Gotham City is undoubtedly Tim Burton with its dark atmosphere and fantastical twisted shapes. This makes the world-building of the film feel more fleshed out than the other Batman films since Gotham seems like a truly scary and surreal setting. Burton’s look for Gotham makes it seem more threatening, like it needs a Batman.

Burton’s signature style can especially be seen with Batman’s rogue’s gallery. Take, for example, Catwoman’s design. Most Catwoman designs that have come before were primarily just a black leather jumpsuit and a cat-eye mask. Burton’s design, on the other hand, looks like something out of a storybook. Catwoman had stitches all over her costume that had a similar appearance to scars and her face, the only thing seen outside of all the black costume, was a pale and ghostly white. While the design was surely different from its previous incarnations, the costume is now seen as iconic. Then there’s the Penguin who looks like something straight out of a child’s nightmare. The Penguin looks like a character straight out of ‘The Cabinet of Dr. Caligari’ with his black and white appearance. Not only did this style make the Penguin stand out, but it showcased Burton’s knack for character design as well.

‘Batman Returns’ isn’t quite like any other superhero film. It tells a surreal story of political corruption and romance with an even weirder visual style. The characters are different from their previous portrayals, but Burton’s changes helped shape the characters for future iterations. Burton’s signature style may have been judged by parents for being too scary at the time, but by leaning into the dark, Burton showcased his own unique style while shaping the Batman mythos as what we know it as today.

‘Batman Returns’ is available to stream on HBO Max