The Many Adaptations of Roald Dahl: From ‘Willy Wonka’ to ‘Matilda’ & More 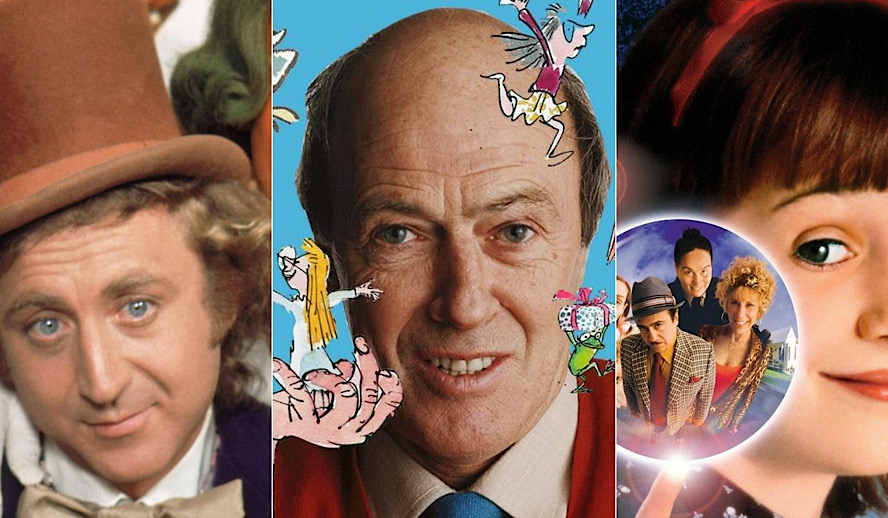 With Netflix purchasing the rights to author Roald Dahl’s work for $686 million, one can easily see how influential Roald Dahl’s stories are. Roald Dahl’s work has uniquely been part of people’s childhoods in more than one way, being both books that kids have read before bedtime and films that kids have watched on repeat. His work has also been part of the childhoods of different generations, meaning that parents can introduce their children to the stories they grew up with. From ‘Willy Wonka and the Chocolate Factory’ to ‘the Witches’, many books that Roald Dahl has written have been adapted into popular films that generations have grown up with.

One of the most distinct aspects of a Roald Dahl classic is a distrust of authority. With the films usually following a child protagonist, the ultimate authority to all kids is adults, whether they’re parents or teachers. Roald Dahl doesn’t portray adults, especially those in an authoritative position, in the best light. He often portrays these types of adults as cruel, untrustworthy, and even stupid.

One of his most memorable characters, Ms. Trunchbull (Pam Ferris) in ‘Matilda’, is an evil and cruel elementary school principal. She acts like a dictator, even carrying around a riding crop, and constantly abuses the children, from throwing them out windows to force feeding them chocolate cake (yeah, Roald Dahl’s work can get weird). While most principals and people of power are portrayed as trustworthy mentors in children’s work, Ms. Trunchbull is an untrustworthy villain, an antagonist. With this theme of untrustworthy authority figures comes the theme of rebellion, which is led by Matilda (Mara Wilson). Matilda, the young hero of the story, uses her wits and magical powers to prank Ms. Trunchbull and make her look foolish, showing the importance of taking power away from unjust people in power. When Matilda makes a newt fly on Ms. Trunchbull, she isn’t just pranking her, she is showing her that despite her authority, she truly doesn’t have more power than her.

In ‘James and the Giant Peach’, James (Paul Terry) lives with his two cruel aunts, Aunt Spiker (Joanna Lumley) and Aunt Sponge (Miriam Margolyes). The two treat James like a slave, forcing him to do all the housework and farm work while they just sit around. They are the ultimate authority to James, being his guardians and even bosses. Like ‘Matilda’, ‘James and the Giant Peach’ shows the importance of rebelling against the unjust authority in your life. James rebels by running away to New York City, using a peach as his mode of transportation. In the end, when James’ aunts find him in New York and try to get him to return home with them, he refuses. For the first time in his life, he sticks up for himself by talking back to his aunts and exposing their abuse to a crowd of bystanders, leading to the aunts’ arrest. Similarly to ‘Matilda’, ‘James and the Giant Peach’ shows the rewards of rebelling against an unjust authority since it takes the power away from them while giving you the power.

What Goes Around, Comes Around

Separating the adaptations of Roald Dahl’s work from other children’s films, these films often deal with the wicked theme of revenge. While this can be seen in the act of rebellion, with an act of disobeying authority inherently being revenge for their abuse of power, the act of revenge can be seen in other ways. Just look at both ‘Willy Wonka and the Chocolate Factory” and Tim Burton’s ‘Charlie and the Chocolate Factory’. In each adaptation, the five brats that aren’t Charlie get their comeuppance. From Mike Teavee shrinking thanks to his big attitude to the spoiled Veruca Salt falling down a hole, each child who misbehaves (or who annoys Willy Wonka) gets their due. The ultimate revenge they face is Charlie, in both versions, getting rewarded for his good behavior. Charlie gets the ultimate award, owning the factory, thanks to his good behavior while the other kids get classic punishments.

The idea of revenge and comeuppance is also seen in both versions of ‘the Witches’, where the witches eventually get their due. In both adaptations, witches have been terrorizing children for decades, even trapping one child in a painting. After turning two little boys, Luke and Bruce, into mice, the witches soon get their comeuppance after the boys use their potion against them, turning the witches into mice. Not only do the boys save the day by turning the witches into mice, but they also get their revenge on the witches, giving them their comeuppance for their misdeeds. This is even emphasized in the films over the books, since in the book, the boys stay mice while in the films, the boys turn back into humans, being rewarded for their good deeds. The adaptations of Roald Dahl often deal with the idea of revenge, a theme most children’s media avoid, and on bad people getting their due.

The adaptations of Roald Dahl are whimsical comedies, specifically having a mischievous sense of humor. One of the funniest adaptations of Roald Dahl’s work is Wes Anderson’s ‘Fantastic Mr. Fox’. ‘Fantastic Mr. Fox’, being both a mixture of Dahl’s witty humor and Anderson’s signature style, proved to be one of the funniest comedies of 2009. Just look at the comedy in this scene where Ash (Jason Schwartzman) and Kristofferson (Eric Chase Anderson) play whack-bat. The scene illustrates Ash’s jealousy of Kristofferson while throwing in a sense of mischievous humor, from how confusing the rules of whack-bat are to Coach Skip’s (Owen Wilson) obliviousness to Ash’s feelings. The film also uses witty and snappy dialogue such as the lab partner scene where great lines like “yeah, let’s just destroy the experiment” and “you’re disloyal” are uttered.

‘Fantastic Mr. Fox’ isn’t the only Roald Dahl adaptation with a humorous edge, all of his films have a wicked sense of humor, the kind of cheeky humor that makes both kids and parents laugh. This is especially seen in both ‘Matilda’ and ‘Willy Wonka and the Chocolate Factory’. In ‘Matilda’, much of the comedy comes from the idiocy of Mr. and Mrs. Wormwood (Danny DeVito and Rhea Perlman). Unlike their daughter, Mr. and Mrs. Wormwood are brash and unintelligent. Some of the film’s funniest moments come from Matilda pranking them, such as the super glue scene, where Matilda puts superglue in her father’s hat. The scene not only adds to the idea of bad people getting their dues but also gives the audience a chance to laugh at the bullies.

‘Willy Wonka and the Chocolate Factory’ is also a hilarious film, thanks in part to Gene Wilder’s excellent performance as Willy Wonka. Much of the film’s humor comes from Willy Wonka not caring at all for the bratty kids during their demise, such as the droll way he says, “no, wait, come back” to one of the children. This not only adds to the darkly devious humor of the film, but also makes Willy Wonka an iconic character.

While Roald Dahl’s work has entertained children and adults for generations through different means of storytelling, it is also important to not romanticize Roald Dahl himself. Roald Dahl is a controversial figure with accusations that range from antisemitic remarks to racism. While he is a controversial figure for his past comments, it is still hard to deny how popular and influential his film adaptations are to both children and adults alike. His work is so successful not just for their wit but also for their messages of rebelling against unjust authority and of people getting their comeuppance. Roald Dahl’s film adaptations, despite how different they all seem, still have the same core messages that made his original books so memorable.